How does the eye

More than 80% of the information people receiveeyes (visually). We distinguish the color, the shape, the distance to the object, the movement of various objects. However, we do not think that eye complex organ of perception and information transfer. Let's see how it works.

The structure of the eye

The human eye has a spherical shape, hence its name eyeball. It consists of three layers: external, vascular and retinal, as well as the internal content.

The second shell vascular It consists of many small blood vessels that carry blood supplies the eye with oxygen and nutrients. In this shell are also several parts: the front - iris, Average - ciliary body and back - choroid. The color of our eyes is determined in the iris pigment content, which is visible through the cornea. In the center of the iris is a circular hole pupil. Its dimensions vary depending on the light: it enlarges in darkness, it decreases in bright light. 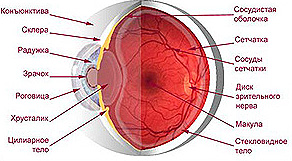 The space between the cornea and iris called front camera. ciliary body producing intraocular fluid thatIt circulates inside the eye, washing and feeding the cornea, lens, vitreous body. The liquid circulating through a special drainage system in the corner of the anterior chamber. The ciliary body is thicker and the accommodative muscle that by ligaments adjusts the lens shape.

Choroid rear of the choroid in direct contact with the retina, ensuring it with necessary nutrients.

A third of the eye Net (or retina) It consists of several layers of nerve cells andlining the inside. It was she who gives us vision. On the retina display objects that we see. Information on them is then transmitted by the optic nerve to the brain. However, not all of the retina sees the same: the greatest visual ability has macula is the central part of the retina, where the main amount of visual cells (cones).

Inside the enclosed envelopes lobby and rear (Between the iris and lens) cameraFilled with intraocular liquid, and most importantly lens and vitreous body. The lens has the shape of lenticular lens. Like the cornea, he misses and refracts rays of light, focusing the image on the retina. The vitreous is a gel consistency and separates the lens from the fundus.

Well coordinated work of all parts of the eye allows us to see far and near, in the afternoon and in the evening, take a variety of colors, orientation in space.