To date, mortality from prostate cancer in men is in second place after lung cancer. Prostate cancer can develop absolutely from any man older than 45-50 years.

The prostate gland is only in men. It has the shape of a walnut and is located under the bladder at its outlet.

Men's hormones stimulate the development of prostate gland from the fetus. Iron continues to grow to the adult age of adult and persists in the same form until men's hormones are produced. In the absence of male hormones, the prostate gland does not fully develop or decrease in size.

Some believe that the prostate cancer occurs against the background of the so-called intraepithelial neoplasia of the prostate gland (VENPZH). Such a state may appear between 20 and 30 years. Almost 50% of men at the age of 50 there are Vennpzh. In the study of the tissue of the prostate gland during this period, microscopic changes can be detected in the gland cells of this organ. At the same time distinguish changes of low and high degree of malignancy.

Prostate cancer in the US is the most frequent tumor, after skin cancer. It is assumed that in 2004 in the United States will be revealed 230110 new cases of cancer of this localization. One of 6 will be revealed by prostate cancer, while only one of 32 will die from this disease. African American men are more often ill and die from prostate cancer compared to white Americans and Asian men. The reason for this is not clear.

Prostate cancer ranks second as the cause of death from malignant tumors among men in the United States, yielding only lung cancer. It is assumed that in 2004, 29,900 patients may die in the United States from cancer of this localization or 10% of the number of deaths associated with cancer.


Causes and development of the disease 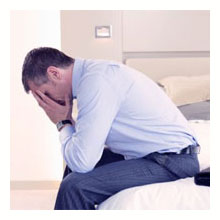 Until the end is not clarified. Prostate cancer development is associated with hormonal changes in elderly men, in particular, with a high level of testosterone — Male sex hormone.

Prostate cancer is characterized by slow and malignant. This means that the tumor grows slowly (if you compare it, say, with liver cancer), it may not manifest many years. On the other hand, the prostate cancer gives early metastases, that is, a small sizes of the tumor can already begin to spread to other organs. Most often spreading in the bone (pelvis, hips, spine), lungs, liver, adrenal glands. This is the greatest danger of cancer. Before the appearance of metastasis, the tumor can be removed, and this will stop the disease. But if metastases appeared, it will not be able to remove them all the surgeon, and to fully cure a person will be impossible.