Diagnosis "porphyria" - not a sentence

Today porphyria is considered to be an incurable disease. However, this disease is defeated by science, and this victory - not far off, - experts say.


Diagnosis "porphyria": not to be confused with "vampirism"

Legends about vampires so attractive todayfor fans of the Gothic genre, have a real basis. Indeed, there are people in the world, whose skin can not tolerate sunlight, their teeth like fangs and painted in ocher, the nails on the hands and feet resemble the claws of animals, and garlic causes a fatal allergic reactions. That's just live these accidents is not so reckless, appears in the novels, fantasy and films about the "living dead."

This, of course, is not about those young people thatenthusiastically playing a vampire, follow the rule "do not wear white", is worn on the chest sharpened symbol "ankh", currently implanted fangs, and sometimes in a drugged stupor bite harmless old ladies. By the way, the last - no joke. The case when in Kaliningrad teenager killed two elderly people for the vampire ritual.

Legends of the living dead and the spirits roaming thenight and feed on blood, exist in almost all nations. The legends vampires appear as half-decayed monster: soulless and not too smart.

For instance, in Slavic mythology, there is a belief that the vampire will not rise from the grave, if there sypanut grain - until the morning it will recalculate the grains.

Over time the image has undergone a transformation. Today's vampire books and movies, the hero - the fatal handsome seducer, preserved distinctive features: the fear of the sun, fangs, garlic aversion and thirst for blood. In the heyday of Christianity vampire legends were supplemented by details such as the fear of holy water and a cross. "Children of the Night" were descriptions of the area "believe, do not believe it," as long as in 1963, the British doctor Li Illis not presented to the Royal Society of Medicine stunning results of his research: vampires, werewolves just a genetic disease of the victim - porphyria!

It is a rare disease (according to some sources,it suffers one person out of 200 thousand) reflected in the fact that the body does not produce red blood cells, there is a lack of oxygen and iron in the blood, resulting in under ultraviolet light begins hemoglobin breakdown. Simply put, patients begins in the sun allergy, blisters, sores, death is possible. In the later stages of porphyria inflammation causes damage to the cartilage of the nose deformation, ears, tendons.

The man twisted his fingers, drying andtighten the skin around the mouth exposes the gums - the projecting incisors become the color of blood because of the porphyrin deposits on the teeth. Garlic stimulates the production of blood cells in a healthy person, at porfirika causes aggravation of symptoms. All this is accompanied by severe constant pain, so often the picture is compounded by mental disorders.

Summing up all the symptoms, get portraitclassic vampire legend, which for centuries was feared and destroyed. Only in France mid-century HVP executed about 30 thousand people, vampires and werewolves recognized on the grounds described Illisa in his monograph. By the way, in 1994 in the Czech Republic it was found burial of the eleventh century with the remains of 13 people: with their hands tied, severed heads and aspen stakes in the chest. Similar findings have met all over the world, most later - around the fifteenth century - is located in Denmark. 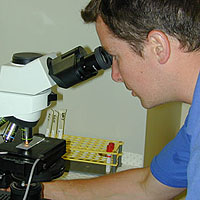 Porphyria - the disease is not contagious and hereditary. If it has at least one parent, 25 per cent of infected people will be and the baby.


Also among the causes of the disease is called incest transferred hepatitis C, and more ... alcohol abuse.

There is evidence that in the Middle Ages suffering from porphyria tried to treat fresh blood, but drink it makes no sense, it does not bring relief.

Since porphyria - is an incurable disease, then talk about its treatment can only very tentatively.
Today, such patients injections with blood.

- Unfortunately, in our country do not payQuestions should focus, - says Yaroslav Pustovoyt, Senior Research Fellow, Hematology Research Center, team leader for the study and treatment of porphyria. - In contrast to the West, we do not have specialists or powerful centers on the issue.

However, there is a more optimistic view ofthis problem. Experts claim that genetic engineering will soon bury the most mysterious disease in human history - porphyria. If not for this "vampire disease", there would be no myths about Dracula or of other blood drinkers, those who fear light, fanged characters. Already successfully completed a series of experiments with the DNA of certain species of fish and mice: congenital porphyria will be adjusted, and the acquisition will be treated with the latest tools. They still exist!