Home>Gynecology>Endometriosis. What is the prognosis?

Endometriosis. What is the prognosis?

Sometimes, after living several years in marriage, womenThey come to the gynecologist with the only complaint - the lack of pregnancy. And I was surprised to find out that they have endometriosis. Because infertility is sometimes the only clinical manifestation of endometriosis ...

Once this thought comes to mind, and the woman,grow to incredible sizes, it overshadows the other. Now all the actions and ambitions are aimed at achieving the cherished goal. And God forbid that something will prevent the holy dream come true!

What a great shock she experiences,which is a result of long and unsuccessful attempts to conceive a baby hears from the doctor frightening conclusion: "Infertility" ... Unfortunately, a lot of such cases. Some of them may be the cause of endometriosis. About this disease, says obstetrician-gynecologist, endocrinologist, a specialist in the treatment of infertility and miscarriage Elena Pechnikova.

Endometriosis - extremely commondisease. And it is typical for women of reproductive age is. The word itself is derived from the mucous membrane of the uterus - the endometrium. This tissue is subject to the hormones that are produced by the ovaries and cause menstruation.

The fact that the endometrium develops cyclically,and an average cycle of 28 days. If the uterus after ovulation did not survive the fertilized egg, ie not become pregnant, then after some time the endometrium is rejected. And this process is manifested, you guessed it, bleeding. That is, menstruation begins.

The essence of the disease is thatendometrium grows outside the uterine mucosa in different organs and tissues. At present, this phenomenon is not well understood, and there are several theories of its development. For example, endometriosis, abdominal explained as follows: fragments of the endometrium, a very viable tissue can to reverse the blood flow during menstruation for fallopian tubes fall into the peritoneum, "take root" and grow there.

Overgrown tissue outside the uterus behavesactively. It still depends on the female sex hormones produced by the ovaries. As a result, the abdominal cavity is a process resembling menstruation. It looks like a lot of internal bleeding of varying severity.

Symptoms and consequences of the disease depend on the, in which organ sprout endometrium. If the ovary is then eventually cyst formed therein. It is usually determined during ultrasound. Make ultrasound woman make periodic dragging pain in the abdomen. But endometriosis can not give any pain. Some women live with him all his life, about anything without knowing it.

If the cyst is small, the conception and nurturing the child is likely, will not hurt. However, most doctors find endometrioid cyst at inspection, insist on its removalsurgically, because the ovary - it is quick and constantly working body. To avoid the "female" problems in the future, it is better not to have it any tumors, especially growing - such as endometrioid cyst.

Infertility ovarian endometriosis can causeOnly in extreme cases - when the cyst fills the whole body and mechanically prevents a fertilized egg. Or has endometriosis and elsewhere.

A variation of the disease - superficial endometriosisIn particular, peritoneal endometriosis. In this case, his pockets grow on the pelvic peritoneum - the tissue that lines the inside of the cavity of small pelvis. Symptoms in this case are similar: the woman feels pain in the abdomen. Often doctors wrongly suspected inflammation and prescribed antibiotics. If they do not help, then it's most likely talking about the wrong diagnosis: in fact, a woman suffers from endometriosis.

Only sometimes you can "find" during endometriosispalpation, when the doctor touched a woman cause pain or lumps determined. To confirm or refute the conjecture in most cases only by laparoscopy. Outbreaks of the endometrium in this study are clearly visible on the peritoneum and amenable to surgical removal.

This form of disease is ofteninfertility, so-called obscure shape. When women have no complaints, and the desired pregnancy does not occur. The thing is that peritoneal endometriosis sometimes causes severe adhesions in the peritoneum itself, between the ovaries and fallopian tubes, around pipes and other places.

Adhesions mechanically interfere with fertilizationegg. To welcome the pregnancy, it is necessary to carry out a laparoscopy: surgery to remove the endometrial tissue from the peritoneum by excision or burning - coagulation. To prevent proliferation of endometriosis is usually carried out subsequent hormonal or physical therapy.

Internal endometriosis (adenomyosis) quite often found with ultrasound. In this form of the disease endometriosis foci germinate in the thick muscular layer of the uterus itself. In some cases this is due to the thinning of the basement membrane, which is suffering from abortion, instrumental curettage, chronic inflammation of the endometrium.

As a result, the endometrial growths in the walluterine hemorrhages occur multiple intermuscular that hurt women. Over time, the muscle tissue of the uterus becomes rough, it loses its elasticity and becomes reduced. This leads to the fact that the time period does not end. Persistent blood loss anemia entail.

The loss of elasticity of the walls of the uterus is fraught with evenin that upon the occurrence of pregnancy it can not be stretched as it does in healthy women with the development of the fetus. Although the month after conception the woman stopped, endometrial tissue, sprouted in the uterine wall, zapustevayut and body elasticity is partially restored. 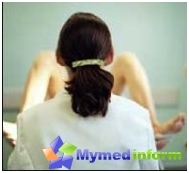 One of the severe forms of endometriosis - retrotservikalnogo. In this case, the space between the uterine cervix andrectum filled with endometriosis. Symptoms of this form of the disease - pain during sexual intercourse, and bowel movements, which are given in the lower back and rectum. Painful seal diagnoses gynecologist at survey.

Some experts see the borderproliferation of endometriosis, do an ultrasound. And in order to establish whether the tissue has spread to adjacent organs (ureters, rectum), it makes sense to make a computer tomography (CT) or nuclear magnetic resonance imaging (MRI).

Surgery to remove the endometriosis - whenThis form of the disease - the most complicated. Sometimes it takes up to 6 hours, as many adjacent organs included in the process. And, unfortunately, even among Moscow laparoskopistov gynecologists there are few who hold it on the highest level.

In addition to these forms of the disease, the endometrium mayto grow in the vagina within the lumen of the fallopian tubes, cervix, on postoperative scars and, in principle, any other organs and tissues. Even on mucous eyes! ..

Since endometriosis - a disease not yet fullystudied, and, alas, completely effective way to treat it is not there. Today we know two methods of struggle: using hormonal drugs and through surgery. It is known that the growth of endometriosis outside the endometrium is dependent on the menstrual cycle. As already mentioned, with the cessation of menstruation, for example during pregnancy, endometrial zapustevayut moves and stops growth of tissue in a natural way.

The essence of the drug treatment isto "simulate" the pregnancy. For this woman to be appointed monophasic hormonal contraceptives, progestin drugs that cause an artificial menopause. When medications do not help, resorted to surgery.

To summarize, it should be noted thatendometriosis - this does not necessarily infertility. The disease is only in some cases leads to the formation of adhesions, scarring and cysts, which mechanically prevent a fertilized egg. In addition, the growth of endometriosis outside of the lining of the uterus may be accompanied by immunological and (or) endocrine disorders in women, which in themselves can lead to infertility or reduce the likelihood of pregnancy. Sometimes the fault of endometriosis occurs early abortion.

There is an assumption that endometriosis, as well assome other "female" disease may be associated with emotional and psychological side of life. The reason - a serious, in-depth changes in the internal state. Maybe a woman in something not satisfied, feels insecure, undervalued. She did not have enough attention, affection and care. It does not feel like a woman in the full sense of the word. Just in these patients, gynecologists often observed clinical form of endometriosis. Treatment in this case should not be limited medication and operational methods.