The study of immune status at birthimmunodeficiencies conducted to determine the activity of the major components of the immune system, that play an important role in protecting the body from infections. To evaluate their performance tests are used first and second level.

Methods of studying the immune status with immunodeficiencies

The study of immune status with immunodeficienciesIt is to examine the number and functional activity of the major components of the immune system, playing a major role in protecting the body from infections. Such factors include phagocytic system, the complement system, T- and B-cell population. The methods used to assess the functioning of these systems, tests are conditionally divided into the 1st and 2nd levels. Tests Level 1 are indicative and aim at identifying the gross defects in the immune system, while the tests Layer 2 functionality and are designed to identify specific "failure" in the immune system.

Tests for evaluation of phagocytosis

To test level 2 assessment of phagocytosis include determining:

Tests to determine the level of activity of humoral immunity

To test a Level 1 evaluation B-cell population can be attributed definition:

Determining the level of immunoglobulins - thisIt is still an important and reliable method for estimating the B-cell population. It can be considered the main method of diagnosis of all forms of immunodeficiency associated with the biosynthesis of antibodies. 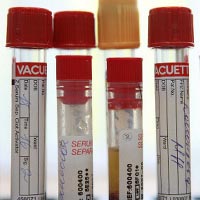 To test level 2 assessment of B-cell population can be attributed definition:

For important information about the state of humoraldefines antibody immunity to bacterial protein and polysaccharide antigens, since the degree of protection of the body from a specific infection is not dependent on the overall level of immunoglobulins and the amount of antibodies to the pathogen.

Valuable information on the state of humoralimmunity can be obtained not only in determining the level of antibodies or immunoglobulins to specific antigens, but also by studying their functional properties. These first antibodies should include a property as the affinity, which is largely dependent on the strength of interaction of antibodies with the antigen. Production of low-affinity antibodies can lead to the development of immunodeficiency.