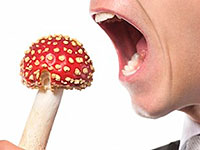 Acute food poisoning microbial nature,developing by eating foods that contain large amounts of bacteria and their toxins, called poisoning. Unlike intestinal infections cause poisoning are opportunistic organisms that normally inhabit the skin, mucous membranes in the intestine of man and animals inhabiting environment, under normal conditions do not cause any diseases. This, above all, the microorganisms from the group of E. coli living in the intestines, Proteus inhabiting soil, cereus, which can be found in the digestive tract of any cloven-hoofed animals, Staphylococcus aureus, which is the closest neighbor of man. All of these germs throughout his life are capable of producing toxins, and when they become too much to cause acute food poisoning.

A common feature of all poisoning, isDepending on the cause of food poisoning, it is their "explosive" nature. As a rule, both sick a few people or a team that combines the use of the same product.

Pathway poisoning -alimentary. The disease is not transmitted from a sick person healthy, but always associated with receiving substandard food. Among the meat and fish products, products made of minced meat, canned transmission factors often act. Dishes containing eggs, milk and other dairy products, bakery products with protein and butter cream, soups, compotes, jellies, cocktails - all this is a great breeding ground for germs. Globally, the reasons for food poisoning are rooted in violation processing, storage and transportation of food.

Susceptibility to toxicoinfection among men ranges from 90 to 100%, that is, if a team all eating "toxic" canned, the poisoning in one form or another almost everyone will develop.

Cases of poisoning are recorded forall year round, but for Disease leader is considered the summer season. Hot weather favors the reproduction of microbes, in this period, most often observed violation of the rules of storage, transportation products, "thrive" unsanitary conditions and the use of food in undesignated places. 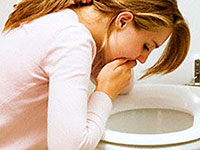 Since the "poison" the product already contains thea great number of bacteria and toxins in its delivery body reacts instantly. With this disease, like food poisoning symptoms appear almost immediately, in a few hours, and the maximum incubation period of a little more than half a day.

The first signs of poisoning are vomiting anddiarrhea, and vomiting indicates lesions of the upper gastrointestinal tract, especially the stomach, and diarrhea occurs when developed enteritis and colitis. Vomiting when poisoning brings relief, is not surprising, because with vomit body gets rid of the huge amount of germs and poisons. Diarrhea with poisoning usually watery, without any admixture of mucus, often accompanied by cramping abdominal pain.

As with vomit and loose stoolthe patient loses a large amount of liquid is gradually showing signs of dehydration: dry mouth, thirst, dry skin and mucous membranes, retraction of the eye. If you do not take action, disrupted heart, there is a heartbeat, pulse becomes frequent and weak, decreased blood pressure.

liquid Lack of effect on the kidneys, decreased urine output, decrease the body's ability to resist the intoxication. In severe cases seizures.

Food poisoning may be accompanied by an increase in body temperature to 38-39 0C, chills. As manifestations of intoxication occur weakness, fatigue, drowsiness, lethargy. Generally, these symptoms are pronounced in children, adults poisoning occur relatively easily.

Foodborne diseases occur in childrenfast flowing hot, quickly lead to dehydration, so the appearance of signs of food poisoning is always a reason to call the doctor or team "Ambulance".