The drops in the nose: benefit or harm?

Even the healthiest person at least once in their lives suffered from a cold. And very often in such situations, we go to the drugstore and buy nasal drops without consulting a doctor. What is it dangerous? 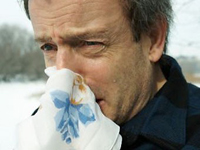 Rhinitis occurs because of the action of microorganismsto the nasal mucosa, which leads to inflammation and exit of fluid through the vessel walls. There are nasal discharge, in addition, increases in the volume of the mucosa due to accumulation of leukocytes in it (our defenders cells that are trying to deal with inflammation). Because of these changes becomes difficult nasal breathing.

Trying to overcome these unpleasant symptoms, we use nose drops. And very often we buy Naphthyzinum and similar drugs, since their uncontrolled use.

What does it lead

If we carefully read the annotation topreparation and do everything correctly, no unpleasant consequences will be, and a runny nose will be held. But long-term use of drops, repeated during the day of their use leads to a vicious circle: a runny nose appear again in a short period of time or develop a permanent violation of nasal breathing. Speaking of medical terminology developed chronic hypertrophic and atrophic rhinitis.

Why is this happening

Almost all nasal drops arevasoconstrictor. Figuratively speaking, they act on the nasal mucosa as a whip. First, they help to reduce emissions and improve nasal breathing due to an increase in the lumen of the nasal cavity. But if you constantly beat the whip, then any damage. Here and there is a chronic inflammation of the nose.

To drop all the same to be useful, it is necessary to adhere to the following rules:

And the best way to avoid unpleasanteffects - cure a runny nose in his first clinical stage. The symptoms of it are: discomfort, scratchy and dry nose, fatigue, malaise. As soon as you have any of these symptoms, do the following: take a hot foot bath or a general, drink tea with raspberries and milk with honey, wrapped in a blanket and get some sleep. In this case, you do not have to think about the benefits and dangers of drops, because they simply do not need you.

If after frequent use of drops youafter some period of time there were unpleasant symptoms: you could not breathe nose, you have persistent runny nose - please contact your ENT doctor. These symptoms may indicate the presence of chronic rhinitis, which may require surgical intervention.