The causative agent of botulism and its history

Today many people know that botulism - is verya serious disease that can be contracted by eating canned food. What is the history of discovery of the causative agent of botulism, and that they know about it now? Answers read the article.


How it all began

December 14, 1895 in a small BelgianThe funeral took place, after which at the funeral was attended by 34 musician orchestra. The next day, a third of them fell ill and three died with symptoms of severe poisoning. When investigating the circumstances of infection it soaks that cause poisoning served ham. Two pieces of ham was salted in the late summer in a barrel, and the poisoning occurred only in those who ate ham, previously was in the depths of barrels of brine.

Bacteriologist E. Van Ermengem investigated the ham, and in the one that caused the poisoning, discovered spore-forming bacillus - clostridium botulinum.

Later it was found that there are severaltypes of botulism pathogens (A, B, C, D, E). Clinical symptoms of the disease caused by them close, but produced by different toxins. Because the diagnosis and treatment of botulism are set corresponding protivobotulinicheskih sera. 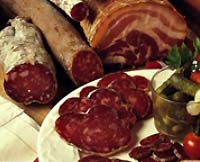 What kind of products are the most commoncause botulism? The name of the disease comes from the word "botulyus", which in Latin means "sausage". This is due to the fact that for a long time poisoning deaths associated with cold meats, mostly with black pudding. Even in the IX century, the German Emperor Leo the Wise prohibits the manufacture of blood sausage in connection with frequent poisoning after eating, eating. In Russia, with symptoms of botulism disease is often conditioned by the fish (fillets, mainly sturgeon). Therefore, these fish poisoning was called.

The most important feature of the pathogenIt is that it produces spores which have exceptional resistance to environmental factors, including high temperature. They can withstand even the 5-hour boiling and die only at elevated pressure and a temperature of 120 degrees (10-15 minutes autoclaving). Therefore, in the conventional cooking and even brief exposure to autoclave they can retain viability.

To avoid saving products canning disputeindustry undergoes twofold autoclaving. After the first exposure in the autoclave products placed in thermostatic conditions. During this time, the remaining viable spores germinate into vegetative forms and easily destroyed during the subsequent secondary processing.

In the above case, the family of poisoning cannedre not kept in an autoclave and therefore caused the poisoning. However, it should be borne in mind that the botulinum toxin itself already broken at 58 ° for 3 hr and at 100 ° C (boiling) - in less than half an hour.

At high temperatures (80-100 degrees) toxininactivated within a few minutes, which kills the vegetative form of the microbe. Such a product is relatively safe for use on the same day, although it remains controversial. Recent germinate only within one or two days and then they will form a toxin again. Therefore, a complete thermal processing product - a guarantee from the majority of food poisoning.

It is important to remember also that the bacillus of botulismis anaerobic, that is developing only in the absence of atmospheric oxygen. That's why the toxin accumulates usually thicker large hams, balyk, sausages. That is why the cause of poisoning of musicians and served as the lower piece of the ham, which is less penetrated the air.

All this should be taken into account and at homecanning, because in sealed jars are all conditions for the development of the bacillus of botulism if it penetrated thither. She falls into products usually with soil particles, where dwells permanently or which entered with the faeces of animals.

The causative agent of botulism is widelydistributed in the soil, especially in the southern parts of the country. It is often found in the mud of the seabed and water. This is because a microbe being saprophyte is able to reproduce not only in vivo but also in dead organic substrate. In soil, it develops heat and anaerobic conditions (absence of oxygen) and stored for a long time in the form of spores. This leads to epidemiological features of botulism.

Often the cause of botulism are vegetableproducts, particularly mushrooms, peas, beans, spinach, carrots and so on. n. In the US, where the canning industry has a great development in the last century, botulism after eating canned vegetable products have long been known. From botulism died, for example, one of the US presidents - Warren Harding. 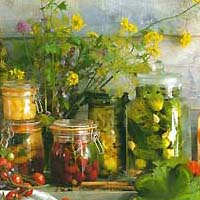 Nowadays, mass conservation productsIt carried out not only in industry, but also at home. This salting, pickles, and jams. But if earlier - before the era of home canning - salt, vinegar or sugar added to pickles and preserves in large quantities, it is now in the presence of dishes and lids for hermetic packaging reduced the concentration of preservatives, they are added often only "to taste."

Therefore, at the slightest violation of the thermalprocessing and packaging sterile products and canned products may be contaminated, including the causative agent of botulism. This rod can occur in mushrooms, tomatoes, aubergines, berry compote, which penetrates from the soil particles. Especially dangerous are canned in a large container. DI Drankin described a large outbreak (poisoned 14 people) of botulism, which were the cause of fungi, "rolled" in the three-liter jar.

We must remember that no particular signs of spoilagein products containing botulinum toxin is not usually the case. Only sometimes it is possible to notice a rancid smell and taste, consistency of loose products. canned bombazh infected with clostridium botulinum, occurs not always. The most common poisonings occur in the use of seemingly perfect product for external signs.

Therefore, caution is needed with regard toany signs of botulinum toxin poisoning. Latent (incubation) period of the disease, namely the time that elapses from the moment of the use of hazardous material until the first signs of the disease varies from a few hours to several days. Early access to a doctor with complaints of sickness (vomiting, abdominal pain, blurred vision, difficulty swallowing, constipation, slurred speech), it is essential for the timely assistance.


A little about the treatment

For treatment there protivobotulinicheskieserum, use of which is the more effective, the earlier they are introduced. If the family or circle of friends, which is used together with a suspicious product, someone complains about these symptoms, it is important to quickly inform your doctor. This is also necessary in order to identify and remove from use common for the victims of substandard product.

Remember that botulism - a dangerous disease,which, when belated recognition and treatment results in death in 20% of cases, that is, killed one in five of the victims! Be careful when home canning products and attentive when the first symptoms of the disease, botulism-like!