Stroke passing unnoticed - almost fantastic. "In memory" remain paralysis, slurred speech, headaches - even if the "ambulance" arrived on time and took him to the very good clinic. Despite the doctors' efforts, the majority of people who have suffered a stroke, unfortunately, are disabled, often in need of constant care for loved ones.


How to prevent a stroke in his life, he tells the head of the rehabilitation department of Institute of Neurology Professor Albert Adam's apple.

it is much lower than from hemorrhagic.

Last blew us Andrei Mironov, Vitaly Solomin, Nicholas
Eremenko, Valery Lobanovsky ... When they say that the patient did
emergency surgery, so it is a hemorrhagic stroke -
a brain haemorrhage.

"Spill blood" occurs after the load - weeding flower beds, large
scandal, prolonged stress. The mechanics of this: the strain breaks
vessel wall. The most common cause - high blood pressure.
But blame can also be a congenital defect of the vascular wall
(aneurysm).

If the vessel to burst somewhere in the leg, not a great tragedy
will be. And in my head - literally blow stuns, and the person loses consciousness.
The volume of blood flowing to the brain varies from the stack to the junior
glass.

Ischemic stroke - a cerebral infarction caused by occlusive
vessels: the brain cells, trapped without oxygen die. Among
the main causes of ischemia - blood clots and atherosclerotic plaques. At any
moment from which the piece can come off, with blood rush up and
firmly stuck in a narrow lumen. Another reason - atherosclerotic
vasoconstriction when inside the vessel almost completely "overgrown"
sclerotic plaque and one simply closes.

On the part of both the stroke often look the same, the difference is visible
CT only. Treatment only helps in case
if you have time with him during the "golden period" - the first three hours
after a stroke. When you remove the hematoma hemorrhage, ischemia urgently
administered drugs that destroy the "cap." Later, emergency measures
useless from flooding or from oxygen starvation "go out"
all huge areas of the brain.

Incorrect to compare the strokes on the subject of "worse-better". It all depends
on which area affected. Sometimes a heavy blow fall
relatively "dumb" parts of the brain that are responsible for not important
function. And for the destruction of significant areas of sometimes quite small
damage.

The worst thing is that only a small percentage of strokes possible
to predict in advance. True harbinger of impending big trouble -
trouble small (mini stroke), that is a temporary violation
circulation.

This is a condition where a little numb arm or leg,
dizzy, it becomes difficult to clearly pronounce words. Maximum
the symptoms disappear after a day, but to see a doctor it is necessary,
because at this stage of the process can still be reversed.

The first step - to know their blood pressure. More than a half
hypertensive patients are unaware of their disease, quenched with headache ...
but-shpoy and analgin. As part of their pressure switches for dangerous
140/90 border - is unknown, but once this transition can be
fatal. 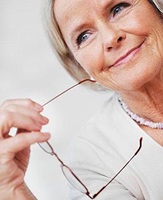 "Measuring the pressure is not necessary from time to time, and every day,
morning and evening, at home, - says Professor Adam's apple. -
If the "keep in check" hypertension, constantly taking Mitigating
Tablet Press, calmly react to negative events - Risk
Hemorrhagic stroke is reduced by several times. "

Warn stroke and special medicines. that
prevent, is recommended to take the usual blood clots
aspirin or analogues thereof, does not damage the gastric mucosa -
thrombo-ASS, aspirin-cardio.

Against vasoconstriction runs a separate group of medicines -
Wessel-Douai instenon, Neoton and others. They are necessary or not, just tell
doctor. All departmental and many city clinics have
Ultrasound diagnostics to help identify: is there
atherosclerotic plaques. Check the two pairs of main arteries - the carotid
and vertebrates (they supply blood to the large areas of the brain). Procedure
quick and painless. The presence of plaques does not mean that everything is bad.

The second survey - duplex scanning - tells how
plaques are fraught with future stroke. Depending on the results
research or medicine are appointed or conduct surgery
Treatment - a plaque is removed (when the vessel is not substantially
It has a lumen). Of course, under general anesthesia. The risk, of course, but
far less than the risk of getting a stroke.

Scale stroke did not immediately recognize. While going "emergency" Lay
the patient in the bed, place a pillow under your head high. Open
window, measure the blood pressure. When strongly elevated let
medicine, it goes down. If the drug is not present - the patient's lower legs
a basin of hot water sparingly.