How to put leeches

Technique productions leeches depends largely on thehow much they should be put and where. If a single leech must be made to suck the blood out of a well-defined, but still gentle enough space (for example, from the gums), the performer of this stunt in advance carefully and gently placed in a glass tube, of course, putting it forward to the tail sucker
Let us learn to put leeches!

Steps for setting of leeches

Technique productions leeches depends largely on thehow much they should be put and where. If one single leech must be made to suck the blood out of a well-defined, but still gentle enough space (for example, from the gums), the performer of this stunt in advance carefully and gently placed in a glass tube, of course, putting it to the tail sucker forward to oral sucker I was ready. The tube puts the open part to the right place. If a hungry leech and healthy, for 5-10 minutes, it prisosetsya.

If you need to put several leeches at once,candidates deposited into a small jar (glass) without water, which was then overturned a quick movement, put in charge of the open part to the right place, and pressed against the edge of the banks to the skin. In order to get at the same leeches stick to very specific places on the body surface, to which will be put in charge of the bank, can be pre-lay a sheet of paper with holes cut in it. Leeches no choice but to stick exactly to the free space.

To create conditions leeches,as close to the natural, some experts put to the body of the bank in which the water (of course, with leeches). When leeches prisosutsya, its contents are discharged through the gap between the body and a jar of water in the well absorbing towel. Then, the bank removed.

If it is necessary to put a number of leeches along an imaginaryline, the bank puts the edge of the skin, starting from the bottom point. Usually leeches actively crawl out of the banks, trying to suck faster. One such opportunity is given, the other gently, but at the same time aggressively shoves back. Bank then rearranged to a new location.

Start sucking can be seen from the characteristicundulating body movements leeches in the pharynx. In the first minutes the patient feels a slight burning sensation at the site where the "vpiyavilsya" ringed worm. Similar feelings arise from contact with stinging nettles. Soon, however, this feeling passes as the saliva of leeches contains everything else relieves pain natural analgesics. 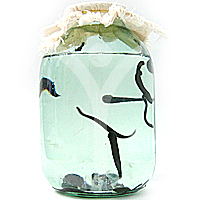 After all the leeches attached themselves under themit is recommended to put a piece of gauze, tissue or towel, so they do not touch the patient's skin. The position of the human body is not strictly defined in the procedure, it is only important that in this position he could sit (or lie) about an hour. Approximately leeches required to fully sated and fall off.

The session is not recommended for more than halfhours. If some of the most stubborn leeches are not willing even to this time to fall off on their own, they can be persuaded to do it by bringing it to a cotton swab soaked in iodine or alcohol solution.

Incidentally, also when separated leechessetting without bloodletting - there is such a method in girudologii proposed in 1948 AS Abuladze. This leech do not give how to get drunk the blood, removing it after 10-15 minutes after setting. All biologically important substances from the saliva of leeches have time during this time to get into the bloodstream. After all, in fact, it is for them and spend hirudotherapy!

What to do with saturate leech

If hirudotherapy session was held in the clinic, the fateleeches are not in your hands. And if you put the leeches themselves, at home? After the end of the session hirudotherapy engorged leeches blood destroy recommended. As a human being sorry for them, but what to do. Pharmacy back not suffer - fed leeches will not accept. Wait until they get hungry again for a long time. To this should pass at least 3-4 months. Releasing in leeches drains just dangerous - there they can easily crawl out. Possible consequences of this escape can imagine.

Use leeches are advised to put in a jar with a 3% solution of bleach, and in the absence of the latter (in the home) - in liquid ammonia solution of formalin or alcohol.
If you live in the countryside and not tooclose to the Arctic Circle, you my good advice - do not burden your soul murder. Release used leeches to the will of the nearest body of water. Harm none of it will not. If you are a city dweller, and regularly visited by the cottage, grab engorged leeches with a tightly veiled bank and also release.