Preventing the occurrence of osteosarcoma

Refusal of certain habits can lead toprevention of many types of malignant tumors in adults. However, in this way prevent the occurrence of malignancies including osteosarcoma, children currently impossible. 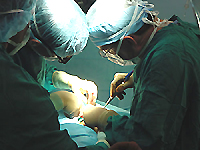 It must be remembered that the earlier the diagnosis of osteosarcoma, the better the prognosis (outcome) of the disease.

Pain in the affected bone is the most common complaints of patients. At first, the pain is not constant and is usually worse at night. In the case of lesions of lower limb exercise leads to increased pain and the appearance of lameness.

Swelling in the area of ​​pain can be many weeks later.

Although osteosarcoma makes bone less strong, but fractures are rare.

Telangiektaticheskie osteosarcoma is a rare variant of the tumor, but in 30% of cases lead to bone fracture.

Normally, in the young age pain and swelling They are frequent, so in many cases, the diagnosis of osteosarcoma is installed later.

Methods of diagnosis of osteosarcoma

bone Radiography It allows to establish the diagnosis of osteosarcoma, but it must be microscopic confirmation by a tumor biopsy.

Through Magnetic resonance imaging (MRI) soft tissue being studied in more detail, and tumorBone marrow. In some cases it is possible to detect small foci of osteosarcoma, which is important for treatment planning. This method is particularly valuable when examining the brain and spinal cord.

Radionuclide bone scan performed using technetium-99. As a result of this study can detect bone and other damage lung tissue.

When localized osteosarcoma struck only the bone and the surrounding tissue, including muscles, tendons, etc.

In the case of metastatic osteosarcoma has multiple bone lesions, lung (85%). In addition, possible involvement of the brain and other internal organs.

Breast cancer: what to expect?