Home>Oncology>Methods of treatment of lung cancer

Methods of treatment of lung cancer

How is and what can give the results of surgical treatment of lung cancer? How is radiation therapy and chemotherapy of lung cancer? The answers to these questions can be found in the article.

Despite the constant improvement of surgical technique, long-term outcomes of lung cancer operations
We have not changed much throughout the world for the past 30 years and leave
much to be desired. Only 30-40% of radically operated lung cancer patients
experiencing control 5-year term. The majority of them within
2-3 years after surgery the tumor process progression occurs
with lesions of intrathoracic lymph nodes, lung or residue
distant organs. This is due to the biology of the tumor,
that despite the seeming radical surgery is often already
generalized disease.

Given the fact that patients with interoperabilityestablished diagnosis of lung cancer is on average 20-25%, it is evident that only a small proportion of patients have a chance to recover. Late diagnosis of lung cancer
defines a large percentage palliative surgery - when in connection with
high prevalence of the process is clearly not possible to completely remove
tumor tissue. In such cases, surgical intervention is often
It aims to eliminate life-threatening complications - bleeding,
suppuration, breakthrough of the tumor in the chest cavity, etc.

Surgical treatment of patients with resectable (potentially remove the oil) forms of lung cancer
It is a radical and most promising method that gives real
prospects for full recovery. After the first successful operations
easy removal in the 30-ies of XX century, the method of permanently
improved, with the greatest progress has been made in the last two
decades. To date, methodical and
technical aspects of the surgical intervention, evidence identified to
surgery and lung cancer
the choice of its volume, the main issues studied anesthesiology, intensive
therapy before and after surgery, the prevention and treatment of postoperative
complications.

In resectable (potentially remove the oil) forms of non-small cell lung cancer (I-III stage) surgical treatment is the treatment of choice. By clarifying the indications for surgery in lung cancer
these stages have in mind not so much the definition of its expediency,
as the possibility of the establishment of the fundamental
surgical benefits, which is achieved by evaluating contraindications.
Over the past two decades, sharply narrowed contraindications
Oncological and functional plan for surgery
patients with lung cancer. 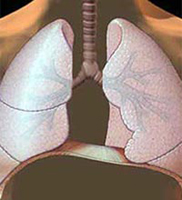 A significant number of patients with lung cancer
there are contraindications for surgery
functional type. These include low compensatory opportunities
respiration and blood circulation, serious comorbidities
(Heart failure II and III level, expressed by organic
changes in the heart; hypertension III degree .;
kidney or liver failure, and others.). The evaluation
contraindications when lung cancer is always a subjective element.

On the unreasonable refusal of surgery patients with lung cancer
It affects the opportunities and practical experience in a medical institution.
Modern possibilities of anesthesiology and intensive care allow
often prevent dysfunction of organs and systems, especially in
adequate preoperative preparation. Refusal of operations
oncology products should also be seriously motivated. This
the question needs to be addressed jointly with the obligatory participation
Thoracic surgeon with experience in surgical treatment of lung cancer.

The standard operations for lung cancer
are pneumonectomy (removal of the entire lung) and lobectomy (removal
one lobe), as well as variants thereof (extended and
Combined surgery, lobectomy with sleeve resection
bronchi and others.). Bronhoplasticheskie operation empower
surgical technique and contribute to improve the resectability
20% of newly diagnosed lung cancer patients
this localization. The scope and nature of the operation, the surgeon determines
Depending on the location and extent of the primary tumor, its
relationship to the surrounding organs and structures, state of intrathoracic
lymph nodes.

The greatest achievement of recent years is the possibility of a true diagnosis of early forms of central lung cancer
(Carcinoma in situ, microinvasive cancer) that can be cured
not only the operational method and radiation (intraluminal) or photodynamic therapy. When the last of lung cancer patients injected
the photosensitizer, which accumulates mainly in cancer
cells, and then performed via bronchoscope rays irradiation
a laser of a certain wavelength. The results justify the use of
technique - the cure is achieved in more than 90% of patients.

Postoperative mortality rate - the main indicator in evaluating the immediate results of surgical treatment of patients with lung cancer.
In the early days, when they started to carry out surgery,
postoperative mortality was extremely high - up to 25%. AT
the last two decades, advances in surgery has resulted in an appreciable
reduction - about 3-4%.

In Lung Cancer Stage I
surgical method allows to achieve cure 70-80% of patients, II
stage, ie metastases in nearby lymph nodes - around
40% and in stage III, ie, metastatic more
distant lymph node groups - only 15-20%. Most cases
death from recurrence and metastasis of lung cancer
It occurs within the first 2-3 years after surgery. If patients safely
survive this critical period and under the control dynamic
observation they do not show the progression of the process, the forecast
It is favorable.

Unfortunately, the majority of patients diagnosed with the disease
very late, in stages III-IV, many identify different
contra-functional plan, and they are found inoperable.
Troubleshooting in the organization of active detection of early forms
disease in primary and qualifying diagnosis of lung cancer,
use of the most efficient methods of investigation, as well as
rational choice of treatment tactics in accordance with modern achievements
Clinical Oncology, close clinical supervision after
Treatment, of course, will increase the efficiency of this therapy formidable
disease.

Radiation therapy in the treatment of lung cancer

Second most effective treatment for lung cancer is radiation therapy. In non-small cell lung cancer
radiation treatment is carried out by a radical program or
palliation. Radical radiotherapy provides
and obtaining a long lasting effect resulting in the death of all
cells of the primary tumor and metastases intrathoracic.

Cancer Radiotherapy lung
carried out by remote gamma settings and betatron
linear accelerators, braking and generating electron radiation
energies from 4 to 35 MeV. There are many methodological choices radiation therapy for lung cancer.
for curative radiation therapy available for patients with locally
lung tumor process (I-II stage), which operation
contraindicated or they are abandoned. The cure these patients
5-10% is reached in observation. Radiation therapy for palliative
program planning in lung cancer
Stage III. In incompletely operated patients and
cancer progressing after radiotherapy surgery is often combined with
polychemotherapy.

The immediate effect of radiation therapy for lung cancer
It depends on the prevalence of the process, histological structure
tumors, a total focal dose quantities. Half of the patients manage
achieve complete resorption of the primary tumor and regional metastases,
and 40% - reduction in intrathoracic tumor process.

Chemotherapy in the Treatment of Lung Cancer

lung cancer chemotherapy in the past decades has become more effective thanks to the synthesis of new medicines. In small cell lung cancer
it is the primary method of treatment and its effectiveness reaches
60-80%, sometimes with complete resorption (resorption) of the tumor, which actually extends
life is about 50% of patients. In the early stages (I) of this histological
forms of lung cancer treatment of choice is surgery, but always with postoperative mnogokursovoy (4-6) polychemotherapy.

In non-small cell lung cancer
immediate objective improvement (partial resorption (resorption) primary
tumor, regional and distant metastases) chemotherapy
It is achieved in 10-30% of patients, however, complete resorption occurs rarely.
It is carried out with contraindications to surgery and radiation treatment,
as well as an additional operation to the treatment with
Locally process in tumor progression after
surgical treatment. 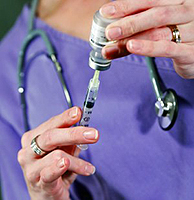 Best results are achieved with a combination of chemotherapy and radiotherapy for lung cancer (chemoradiation), with possible simultaneous or sequential use them.

Improving the efficiency of surgical treatmentpatients with non-small cell lung cancer stage III is connected with the development of combination therapies, providing a combination of radical surgery with radiation therapy for lung cancer
and / or anticancer drug treatment. Additional methods
is used before or after surgery, during it, as well as pre- and
postoperative periods. Many questions of the combined treatment of lung cancer
It remains controversial and unclear. However, it is obvious that in stage III
the combined treatment results are better than one surgery.

Often, patients with locally advanced lung cancer
come to the hospital with severe respiratory failure on the background
obstruction (blockage) tumor of the trachea and the large bronchi, when it
It is, above all, on an emergency to eliminate threats
Life respiratory and cardiopulmonary diseases. Designed
algorithm for the treatment of this group of patients with lung cancer with the use of high-tech modern methods.

Summarizing all the above, we can conclude that effective treatment of lung cancer is possible only when it is detected early enough before the onset of clinical symptoms. Active detection of lung cancer
In preclinical period remains a priority organizational
medical interventions, improving long-term outcomes.
Running at an early stage of organ or surgical
endoscopic treatment not only gives hope to cure the patient,
and simultaneously provides better preservation and disability
quality of life of patients.

It is hoped that on the one hand a well-coordinated work
medical, and social and government structures, and on the other -
awareness and serious attitude toward our own health
of the population in terms of achievements XXI-st century will make a real increase
effectiveness of the fight against this malignant disease.