In every field of medicine has a "queendisease "- a problem that does not work and solve and can not be ignored, and even to the same it acquires a myriad of myths and legends. In psychiatry, the crown belongs, of course, schizophrenia.

When we want to indicate unacceptable for usstrange behavior of a person (the habit of urinating off the balcony, to the non-matching our tastes in clothes, or political opinion), we often talk about it, "schizo". However, schizophrenia as a disease - it is quite another.

In schizophrenia, the first to suffer thinkingand perception. The patient begins to live in their incomprehensible, terrible for ordinary people the world. In normal life, he almost guided and can even be dangerous to others (joke-jokes, but many serial killers suffer from schizophrenia, killed, for example, itinerant women, being sure that it is their mission - to save the world from corruption). All decisions must be taken for the patient relatives and, in fact, doctors.

Hallucinations. In schizophrenia are often particularly auditory hallucinations. The man begins to hear "voices", and according to his will stop the dialogue sounding in his head, he can not.

The patient is usually attributed to the "voice"supernatural forces. The content of such conversations may be neutral or may frighten and lead to despair. Sometimes the "voice" of forcing a person to do what he wants to do: to jump out the window, for example. And well, if the window on the first floor ...

Rave. The man suddenly begins to feel acutetheir individuality, uniqueness. For example, he feels himself a prophet, from which you want to save humanity (delusions of grandeur or delusions of special purpose). Or vice versa - feels under scrutiny higher powers: in person (delusions of persecution) of the Federal Security Service and the CIA to Satan. 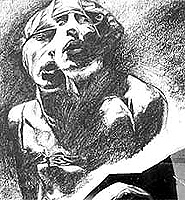 In patients with schizophrenia may appearsupervaluation figure. It is not necessary that it be someone from relatives. Perhaps it will be the neighbor across the street, President Putin, the Lord God, or do fictional character. Sometimes the patient seems to be that "supervaluation" controls his thoughts, as it were, puts them in his head violently. And sometimes it seems that thought immediately made known this significant character or all associates.

The distortion of perception. Conventional colors and sounds may seem more vividand unbearable. Minor signs of the objects are highlighted. If you ask a patient with schizophrenia to spread the colored blocks into different piles, it discards of the dice, but includes the classification of something extra, such as chairs, desks, or ... doctor.

Retire into oneself. The symptoms of schizophrenia also include extremeapathy, impoverishment and disappearance of speech and incongruity of emotional responses, which usually leads to social withdrawal, until the end of any kind of contacts were.

catatonia. With catatonia the person or constantly moving unable to stop, or, conversely, thicken for many hours in the same position.

Between normality and pathology

Diagnosis of schizophrenia - a piece thin. Traditionally, to put this psychiatric diagnosis, sufficient to have at least one clear symptom. Thus, the schizophrenic is quiet and inoffensive "Napoleon", experiencing at home in the evenings defeat at Waterloo, and the man coming in a catatonic stupor for many hours frosting in a terrible and uncomfortable position, which can not survive outside the hospital.

Incidentally, the definition of schizophreniaInternational Classification of Diseases (ICD-10: "persistent delusions that are inadequate for this social culture and completely impossible") may enter and representatives of any subculture, and a strong passion for something to people. It all depends on the doctor concepts of "possible" and "impossible."

Unfortunately, the diagnosis of "schizophrenia" in RussianPsychiatry has long been like a garbage can, where to put everything that does not fit into the rigid framework provided for other diagnoses. The reason for that - not a bad Russian Medicine (One may criticize the health care system, but doctors at us in the vast majority of good), and the blurring of symptoms and the fact that schizophrenia - a very convenient diagnosis.

Treatment of Schizophrenia never really humane was not. Even if we forget about the horrors of the Middle Ages, and we will only talk about the "truly scientific approach" enlightened XX century. Why are lobotomy, electroshock therapy, straitjackets ... Yes, and antipsychotics - he was still a gift, especially if you assign them large doses. No wonder haloperidol, the most popular we have a cure for schizophrenia, called chemical straitjacket.

And all would do: There are terrible disease, and treatment poprotivnee. But if treated only patients! Since the symptoms of schizophrenia rather blurred, the diagnosis of a life, and the person who receives it, completely deprived of legal capacity, the USSR Su

schestvovala malignant tradition ascribeschizophrenia various freethinkers, dissidents and send them to a psychiatric institution forever. But will not they just lie in neat wards at public expense ?!

Thus, hospitals were transformed intopunitive institutions where accidents dissidents, and with them at the same time and really unhealthy people "healed" to a very sorry state. Modern domestic psychiatry slowly and with difficulty freed from punitive traditions of the recent past. Now much more accurately diagnose schizophrenia, much thinner separated from other diseases. Not so long ago even begun to cancel the diagnosis retrospectively.

Treatment was also much more efficient andhumane, but the legacy of the old system is still there. And now, there are clinics where diagnosis "schizophrenia" are entered, no hitting anyone, not understanding, and sometimes not without benefits.

Schizophrenia - two-faced concept. On the one hand this disease. It can be treated, and to seek to improve the status, and even stable remission. On the other hand, it is a brand that you can stick to the patient as a human being, and a healthy. The stigma that causes fear and allows under the guise of treatment violate human rights. And the situation will change only if we fully understood schizophrenia and, ceasing to be a mystery, it will no longer frighten us.