Asthma does not distinguish between the poor andrich, young and old, hot and temperate climates, developed and underdeveloped economies. But science also does not stand still: today about asthma has been known for many things, there are effective treatments. Find out the enemy in the face!


Not all the asthma that choking 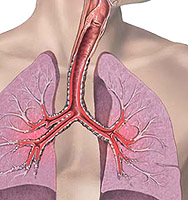 In today's world, almost every tenth sickasthma. It does not distinguish between rich and poor, young and old. Equally thrives in countries with hot and temperate climates, with developed and underdeveloped economies.

Thus, the classification of asthma. Asthma, which translated from Greek means choking, doctors called the seizures caused by a variety of reasons. It was only at the beginning of this century, when science began to develop rapidly Allergology, it was possible to separate the true asthma from its other forms, which are called symptomatic, that is emerging as the symptoms of some other diseases, such as chronic bronchitis. Classification provides that asthma is allergic and non-allergic forms.

Bronchial asthma is aallergic inflammation of the bronchial mucosa. There she was suffering from hypersensitivity or sensitization to various substances - allergens. And the tendency to allergy, including asthma and can be inherited. If it suffers from one of the parents, children risk of contracting is 20%, if both parents have asthma (which fortunately does not happen too often), the risk increases to 70%. Allergens can be animal hair, carpets (both natural and synthetic), and dust home library (book), pollen and perfume - in short, nearly everything.

The rapid development of science and technology, chemicaltechnology has led to the fact that for some 50 years, people in fact created a new habitat in which an important place occupied by the chemical, synthetic products: decoration of apartments and cars, furniture, dishes, clothes, linen, detergents, paints, paint, medicine and much more. However, biologically adapted in such a short period of time to this new environment, we have not been able to. That is why a powerful explosion occurred various allergic diseases including bronchial asthma. Over the past half-century the incidence of this disease has doubled.

Bronchial asthma - a chronic disease,proceeding with periodic exacerbations. They can be either mild, characterized by a certain shortness of breath and cough with mucous expectoration branch, or severe, with bouts of breathlessness. At the same time, as the doctors say, the patient developed transient bronchial obstruction (ie, blockage of the bronchi), which is based spasm of bronchial smooth muscle, edema of the mucosa, and increased separation of mucus. During this period, the temperature may rise.

Choking usually occurs suddenly, often at night or early in the morning. Sometimes it is preceded by a violation of breathing through the nose, feeling sore, dry cough.


The classic attack is pronouncedpicture: the patient is not enough air, as if the chest is squeezed, breath fast and choppy and difficult to breath and is accompanied by the characteristic wheezing. Man excited and scared.

Clinical manifestations of asthma are diverse and notdepleted reaction in response to an allergen. The fact that allergic inflammation in bronchial tissues changes with time and their sensitivity to non-allergenic factors. Not surprisingly, the exacerbation of asthma may occur after suffering a cold or the flu, as well as other inflammatory diseases: sinusitis, bronchitis, tonsillitis, in response to physical activity that most often occurs in children and the elderly, and requires the use of anti-allergic drugs.

One of the measures of prevention of exacerbationsasthma - prevention and early treatment of bacterial and viral respiratory tract infections. And for this it is necessary to strengthen the body's natural defenses and increase its resistance to infection by a hardening, vitamins and various immunotherapeutic agents, for example, the well-proven bronhomunal drug.


Asthma life is not an obstacle

Asthma is now not a fatalserious illness, as it was a quarter century ago. Today, patients can actively work, play sports, sing and even diving. So now asthma - is not a hindrance for a full life. On one condition: at the first sign of difficulty breathing need to see a doctor, pulmonologist better. Early diagnosis of asthma and timely treatment are of paramount importance.

There are many methods to distinguish trueallergic asthma from diseases accompanied by difficulty breathing. If required, the doctor sends the patient to consult with other professionals, and above all an allergist to find out the cause of allergies, allergen detect and treat in time. So how do how to treat asthma?

The basic method is to ensure that the interruptthe body contact with the "guilty" allergen. For example, if the attacks provoke blooming ragweed, it is necessary to take a vacation to coincide with a business trip, but by all means try to avoid contact with it. It happens that it is necessary, though it is hard to part with their four-legged pet. Or change jobs in the so-called occupational asthma when it is caused by one of the factors of production.

But there are other, less harsh for the patientway to get rid of painful relapses - it is necessary to "make friends" with the allergen, "tame" him. This is achieved by administration of a long (typically by injection) of small, gradually increasing doses of the allergen. Treatment is carried out allergist called specific desensitization. When allergies to various allergens can be applied non-specific desensitization drugs such as gistoglobulin, splenin, allergoglobulin.


Inhaler, pounding the genie in the bottle

When the allergen can not find, it is necessaryconstantly taking certain medications. Most of them are used in a strictly dose inhalation, which drastically reduces the dose of drug, and hence the burden on the liver and severity of adverse reactions.

At the heart of the drug treatment of bronchialAsthma is a warning or removal of allergic inflammation of the bronchial mucosa. Most often used for these purposes hormonal preparations: intal, which is used by inhalation for the capsule 4 times daily kramoglin. Well established itself tayled drug. It is enough to take only 2 times a day. 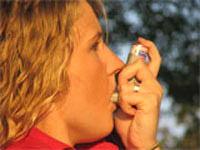 It makes life easier for patients,especially school-age children, as they are often shy or forget time "inject" another dose of the drug. Furthermore, tayled has greater anti-inflammatory effect that it is able to receive not only in the early stages of the disease. The effect is already apparent after 3-7 days of starting treatment, and for "the cough" version it is reduced at the end of the first day. "Tayled mint" (under this name the drug is sold in our pharmacies) is pleasant to the taste and leaves a bitter taste in the mouth. In cases of more severe asthma doctor prescribes other drugs for inhalation: aldetsin, bekotid, fliksotid. The patients use them for a long time, often years.

By inhalation they cause almost noside effects, since extremely small dose substantially not absorbed through the bronchial mucosa to the blood, exerting a local effect only. However, preferably after inhalation, rinse your mouth with water to a part of the drug is not settled in the mouth. And only suffering very heavy flowing asthma have to take oral medication. They are always prescribed by the doctor.

These agents relieve allergicinflammation in the bronchi and thereby prevent an attack. If, despite treatment, it is still there under the influence of, for example, too large a dose of the allergen or suffering SARS, it is necessary to use the funds which have bronchodilator properties. These include Ventolin, berotek and others.

Easy choking docked 1-2 dosesinhalation of these drugs. Bronchodilator effect occurs in about 5 minutes. To infuse a portion of the drug, you first need to take a deep breath, and then a very slow breath. After 1 -2 seconds from the start of the inhalation valve to press the inhaler, the mouthpiece does not bow lips, and keep at a distance of 1 cm in front of an open mouth. After inhalation, it is recommended to hold your breath for 5-10 seconds. With little effect procedure is repeated after 10-15 minutes.

It happens that the patient (usually it happens in children andelderly) is difficult to reconcile with the inspiratory phase of the inhalation formulation. In these cases, I recommend using a simple device called a spacer. They also advisable to use during a severe attack when a deep breath, calm difficult to do, because of what the medicine does not fall into the bronchi, and is deposited mainly in the mouth and on the walls of the larynx. The required dose of the drug should be injected from the inhaler into the spacer, which is a flask, and much of it is easy to inhale the drug, so that most of the hit in the bronchi.

Since we are talking about devices, we call anotherpeak flow meter. It helps to evaluate the effectiveness of treatment, and in addition, like the barometer predicts impending bad weather, indicating the approach of an exacerbation, thereby allowing time to stop the attack.

If he still appeared, though so heavy,that inhalation, even repeated, has no effect, it is necessary to urgently call the "fast" to the doctor introduced the intravenous aminophylline. Sometimes it is necessary to hospitalize the patient, but it is in these times of emergency. Firstly, at the disposal of doctors, patients and thus there is a large number of effective tools to how to prevent the aggravation and stop attacks. Secondly, suffering from bronchial asthma, as a rule, they are able to help themselves, due to the fact that the special asthma-schools are open in many clinics. They are taught the method of application of drugs in different situations show how to use inhalers, spacers, peak flow meter.

To enroll in asthma-school, contactChief Specialist - pulmonologist or allergist health department on a residence. They prompt - where these schools are under any medical institutions of the city.

Rational construction scheme of observation andtreatment of patients with bronchial asthma can significantly improve patients' quality of life. In many ways, can help and rest in countries with a favorable climate for health. Arrange a treatment, take a trip.