Already no one, neither the doctors, nor the patientsthere is doubt that warts, which are one of the reasons for the spread of human papillomavirus (HPV), need to be treated. However, for many, the question remains - how. Now there are several basic methods for removing warts, cryotherapy is considered the most effective.

On the therapeutic properties of the cold it has long been known. Even in ancient times it has been observed that the ice encasing or wrapping wet the sheet has analgesic, anti-inflammatory and anti-swelling effect, which is due to the fact that under the influence of the cold constricts blood vessels, slowing blood flow and reduced metabolism.

The widespread method was in modern cosmetology.
For cosmetic purposes are generally used liquid nitrogen, whose temperature -196S. This is the basis of its therapeutic effect.
With a short exposure to cold (5-10 seconds)liquid nitrogen has a superficial effect on the skin: the vessels first contract, and then expand on the contrary, increasing local blood flow. This is the principle of cryomassage.
But if the time of exposure to liquid nitrogen increaseto 30 seconds or more, the tissue is destroyed. Cryosurgery (from the "cryo" - cold and "destruction" - destruction) used to treat various neoplasms, including common and plantar warts. 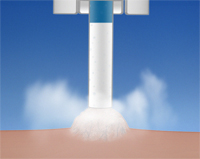 The technique for removing warts with liquid nitrogen is simple: the applicator with a cotton swab is immersed in liquid nitrogen and applied to the affected area of ​​the skin. Depending on the size of the wart, the exposure time lasts from 10 to 30 seconds, after which it turns pale, swells and disappears. Sometimes, especially after removal of the plantar warts, a deep wound remains, which is no less painful than the wart itself, and subsequent scars and scars do not look aesthetically pleasing.
This procedure is carried out only by a doctor or a specialist cosmetologist and therefore requires time and money (the cost of one procedure varies from 500 to 1500 rubles).

An alternative can be a tool to remove warts "KrioFarma", which is designed for use even at home on their own.

The principle of operation is the same as incryotherapy, which holds the doctor -zamorazhivanie warts. However, instead of liquid nitrogen as a refrigerant, a special cooling the mixture, the temperature of - 57C. That there is a risk of side effects in the form of wounds and scars - minimum. Security is provided by the application, and the special design of the cylinder, eliminating errors in the dosing means. 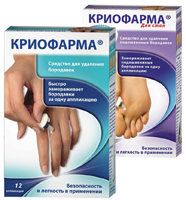 Packaging means "Cryopharm", in addition to a cylinder withfreezing mixture, includes 12 disposable applicators and a holder. It is easy and convenient to use the tool: the holder with the applicator must be inserted into the container and kept pressed for 3 seconds. After this, the applicator should be applied to the wart for 20-40 seconds. To remove the plantar wart (tongue), Kriofarm for feet has a file for rough skin, a measuring scale for determining the time of application and a soft patch.

The procedure does not affect the normal life: after treatment "KrioFarma" you can safely walk in shower and do normal activities without experiencing discomfort.

Cryopharma is the most popular wart remover in Europe. We have known it since 2008, and during this time also gained the trust of not only patients, but also doctors.


There are contraindications. Before use, read the instructions. RU№ Terminals 2007/00426