In the summer vacation most easily fall prey to fungal infection. Getting self-defense! 20% of people suffer from fungal infections - fungal diseases of the skin and nails 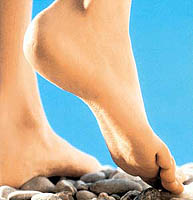 Keratomikozy. When they are affected only the superficial layers of the skin,often on the body. This so-called multi-colored lichen - slightly scaly rash of small specks of brownish color. On tanned skin look more bright.

Candidiasis. Can affect mucous membranes and skinpalms, soles, nails (nail plate becomes uneven, turns brown, easily peeled off from the nail bed). By the way, in the development of so many women familiar thrush (vaginal candidiasis) guilty of the same genus Candida fungi, settled on the mucosa.

Where to wait for impact

The risk to catch the fungus directly into the water below. Not so dangerous in terms of contracting and hot dry beach sand and pebbles. In the hot sun sites fungus dies.

Even fungi - "spies" can penetrate poorly treated manicure tools. It is better to refrain from manicure-pedicure to spa salons random.

Of course, the risk of infection by the fungus on the "wild"beach, where "a handful" campers without medspravok much higher. But in a decent motels can not feel completely safe. For example, a friend of mine brought the fungus with a prestigious resort in the south of France. So that the loan prevention.

The fungus penetrates the skin for 3 - 5hours. Therefore, coming from the beach, in your room be sure to wash your feet with warm water and soap. It is advisable to buy in any pharmacy OTC antifungal cream and lubricate their feet after each trip to the beach or the pool. You would not wear someone else's shoes and "public" podsledniki to try on shoes.

We carry out a massive attack

If, then action needs to be such a plan, returning from holiday, you will find yourself in the symptoms of fungal infections.

Go to a dermatologist: fungi can not be treated with folk remedies. Lemon juice and a bath with a decoction of St. John's wort or plantain can only relieve the itching and smooth out any symptoms - itself a fungus remains in the body.

A piece of nail and skin flakes take onstudy that will help determine exactly how you were infected by a fungus and is it a fungus at all. The fact that all of the diseases associated with changes in nails and skin stop fungus fault only half the time.

The physician should assign antifungalsboth external (ointment, cream, gel), and for internal use. Now considered to be the most effective means of destroying the strong cell membranes of fungi.

The fungus is difficult to cure

Spores of the fungus is very dense chitinous sheath: it can not "see through" our-backs cells. Because our bodies can not independently resist fungus, having developed antibodies against it.

Who is at risk

Most vulnerable to infection:

And if you give up fungus in captivity

Doctors do not understand why people are up to the lasttrying to hide the fact that the fungus sick, "camouflage" disfigured nails: a woman from the heart obscure paint, men lie, saying, I pinched the nail. 80% of people only go to a dermatologist when the itching becomes unbearable to endure!

What happens if you start treatment too late? You will certainly infect all households. You will not be allowed in any decent resort. Patients nails surgically removed. It's painful and heal for a long time. The stronger fungus stuck in the body, the more it became a dispute, the longer you will be treated with antifungal drugs - up to 6 months. Besides fungus gradually affects the nervous and circulatory systems, and can give serious complications of the heart and brain.