Cystitis - inflammation of the mucous membrane of the urinarybubble. disease familiar to most women, especially nulliparous. The fact that the female body, due to some of its features, is susceptible to cystitis more than men. So well, if every woman will know in the face of this insidious "enemy".


Most women at least once in their lives experiencedsuch sensations as suddenly appears frequently painful urination and pain in the bladder. This is the most characteristic symptoms of acute cystitis - infectious inflammation in the bladder wall (mainly in the mucosa) - one of the most common urological diseases.

Pathogens most oftenE. coli, staphylococcus, streptococcus and other representatives of conditionally pathogenic flora (bacteria exhibiting its pathogenic properties only under the influence of provoking factors). Often there are cystitis associated with ureaplasma, mycoplasma, chlamydia, trichomonas and fungi of the genus Candida.

In women, cystitis is much more common than themen. The main reason lies in the peculiarities of the female urinary tract: a short urethra (about 5 cm), close anatomical location of the vagina and the anus to the external opening of the urethra (urethritis) create favorable conditions for the spread of pathogenic microflora in the lumen of the urethra and bladder. In the postpartum period increases the likelihood of cystitis. The reason for this are the following circumstances:
Normally, in a woman's vagina microflora lives. The basis of it are so-called lactobacilli, or Dederlyayna sticks, there is also a small amount of bifidobacteria and other microbes. All these organisms are in ecological balance, their number is strictly controlled each other, and they are not allowed to appear in the vagina to any other microorganism. Under the influence of various factors may occur violation of this balance. Even safely flowing pregnancy can be considered as a factor leading to changes in the balance - vaginal dysbiosis (bacterial vaginosis).

What are the symptoms of cystitis

Bladder Inflammation appears especiallyall frequent urination. At the same time women are constantly having a strong urge to visit the toilet, which do not correspond to the amount released during this urine. Often, a woman observes the pain at the end of urination, and sometimes blood in the urine. Quite often, the pain (burning sensation, cramps) can accompany the whole act of urination. In this case we speak about the origin of urethritis - inflammation of the urethra. In acute cystitis, pain in the abdomen. In connection with the advent of the unbearable urge to urinate may be a false incontinence - a condition in which the woman feels the urge, but does not have time to run to the toilet. This condition is reversible, it goes after the treatment of the disease.

Under unfavorable conditions for cystitisIt can be complicated. Thus pathogens fall within the kidney, which leads to the development of acute pyelonephritis - nonspecific infectious inflammation pyelocaliceal system and renal parenchyma. Microorganisms may get into the kidney in two ways:

Typical manifestations of acute pyelonephritisis a sudden increase in body temperature to 38-39 degrees and above, accompanied by a "stunning" chills. Often patients complain of pain in the lumbar region, nausea, vomiting. It is important to remember that acute pyelonephritis is an emergency pathology and direct indication for hospitalization. Therefore, even after a single episode of fever before the dates indicated with a fever, occurring against the background of the symptoms of acute cystitis, particularly in the postpartum period, you need to be hospitalized to the hospital for emergency indications. 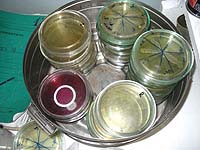 In most cases, diagnosisacute cystitis is not difficult, because the symptoms of the disease is very specific. However, to confirm the diagnosis is necessary to pass a urine test, which will be identified and an increased number of white blood cells may identify erythrocytes.

To assign the correct antibioticyou must make the microbiological analysis of urine, which allows you to identify the pathogen sensitivity to one or another antibiotic (urine is placed on a special nutrient medium, where there are microorganisms that cause cystitis, then explore the sensitivity of microbes to antibiotics). As an instrumental methods of examination for acute cystitis can be applied ultrasound and cystoscopy (a study in which with the help of a special device - a cystoscope - examine the eye bladder and urethra). However, most of the survey is limited to the study of laboratory data.

It is important that the survey woman suffering from cystitis, passed the tests that would reveal about the state of the vaginal microflora and the presence of infections, sexually transmitted diseases.

For the treatment of cystitis are traditionally used antibiotics and uroseptiki. The doctor will select a drug, the use of which does not preclude breastfeeding.

In parallel, the treatment of bacterial vaginosis infections and sexually transmitted infections.

To prevent recurrent episodes of acute cystitis at the first signs of the disease need to visit urologist and gynecologist and have the prescribed treatment in full.

Observing these conditions you will ensure not only the prevention of cystitis, and successful breastfeeding.