Home>Urology, Nephrology>Nephroptosis: if the operation is inevitable - you choose the method

Nephroptosis: if the operation is inevitable - you choose the method

So, the doctor has diagnosed you "nephroptosis" andIt recommends surgery. Nothing can be done - will have to be operated, but in what way will be made this operation can already choose you. On the peculiarities of modern nephropexy tell urologist.


The choice is - traditional or laparoscopic nephropexy 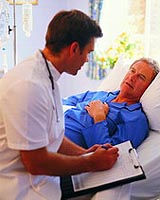 Whether to do the operation? Or try without surgery? I will have an ugly scar on the side? I need not lie climbing week after the operation, and I miss a session? We often hear these and many other questions on the stalled patients. By answering these questions you need to say that most need surgery, as there are no other non-invasive methods for the elimination of violations of the outflow of urine from the kidney, if the reason for that - nephroptosis. It depends on the stage of the disease, the degree of disturbance of outflow of urine from the kidney to the degree of hypertension, on the presence of kidney inflammation - an integrated approach and, at the same time, an individual, ie, we believe the indication for surgery, patients have at least two symptoms of the presence of kidney displacement of 1.5 vertebra.

Thus, the competent doctor you put this diagnosisand suggested that the operation - "stitching" the kidneys - nephropexy, certainly offering several options. What's offered? And you ask - in what way? Most likely this will be the traditional abdominal surgery with a cut on the side of 10 cm, using as a fixing material such as muscle flap - all right, that's in the past century, we (practitioners, urologists) arrived, and I must say, for the most part continue work on this method today. What are the requirements we make to ourselves before the operation today?

All aspects are observed, but at what cost: long stay in bed for a long healing surgical wounds, the likelihood of post-operative hernias, a cosmetic defect of the lumbar region (rough scar), a long rehabilitation period (21 days of strict bed rest and limit physical activity for 6 months after surgery). Naturally the question arises - is there an alternative? Today we can say that there is an alternative - a endovideosurgical (laparoscopic or lyumboskopicheskaya) operation.

What it is? Using a special tool, modern surgical equipment, the presence of certain skills of the surgeon performed an operation, so you can do nephropexy ( "stitching" the kidney) in compliance with all the requirements listed above, with all the old, ie as for open surgery, techniques and techniques. The difference in access and technology that reduce trauma surgery.

Previously, we have noticed that after the operation nephropexythe traditional way in patients with no symptoms disappeared and raised a question: whether it was necessary to operate at all, except for the scar on the body of the patient, nothing has changed. In this case, laparoscopic surgery eliminates the likelihood of the patient ugly scar or postoperative hernia, so we can say that the patients do not "risk" is not getting rid of the symptoms to be unsatisfied. Another advantage of the laparoscopic approach with nephropexy - simultantnyh when performing operations (simultaneously two or three transactions). For example a young woman suffering from secondary infertility, ovarian sklerokistoz, right-nephroptosis - the patient has a chance to get rid of just one laparoscopic approach.

Another, in our view, the advantage - duringLaparoscopic surgery is possible to identify the pathology of clinically before himself does not manifest and its elimination, for example - adhesive disease - adhesions can be successfully separated.


The disadvantages of laparoscopic nephropexy

But if there is equipment operating, qualified personnel, and the patient is provided with a consumable - no flaws. Thus, it is the relative disadvantages.


Shortcomings in the performance of traditional nephropexy with respect to laparoscopic

As you can see, thanks to the emergence of modern equipment and new techniques endovideoskopiya firmly taken its rightfully worthy of a place in the treatment of renal pathological mobility.

The first operation carried out by traditional method. The postoperative period was 11 days, the full rehabilitation of 3 months.

A year later, the patient underwent laparoscopic nephropexy prolene mesh with the other hand - the postoperative period - 3 days, the period of full rehabilitation 1 month + cosmetic effect.

So make your conclusions and choices.