Vesicoureteral reflux (PMR) - Unnatural throw urine from the bladder into the ureter.

In pediatric practice PMR - one of the most frequentSecondary causes wrinkling kidney function loss. Firstly, urine reverse current does not ensure complete permeation of evacuation in the urinary tract microflora, leading to chronic inflammation of the kidneys (pyelonephritis). Secondly, at the time of casting of urine into the renal pelvis pressure therein increases many times, resulting in mechanical damage to renal tissue. The end result of chronic inflammation and excessive hydraulic load is scarring of kidney tissue with loss of function (secondary renal scarring, nephrosclerosis).

There are 3 main causes of PMR. They all lead to the failure of the valve function intravesical ureter. The most common in children - congenital anomaly ureteral orifice. The second - high blood pressure in the bladder caused by a violation of its functions or obstacle in the urethra. The third - a chronic cystitis, which interferes with tissue elasticity intravesical ureter.

Occasionally there are complaints of pain in the abdomen or in thethe lumbar region of the lesion. But more often vesicoureteral reflux does not manifest itself clinically prior to the development of pyelonephritis. The latter has a characteristic clinical and laboratory picture of a well-known pediatricians. In the acute phase of the disease have a high fever, symptoms of intoxication. increased number of white blood cells, the protein appears in the urine analyzes. The blood tests also determined by elevated levels of white blood cells, increased ESR. Typically, children with acute pyelonephritis pediatricians directed to inpatient treatment, which is usually carried out after examination of the urology profile.

The main method of diagnosis of PMR is cystography.

Cystography - X-ray examination, which allows to evaluate the anatomy of the bladder and urethra, identify vesicoureteral reflux (throw urine from the bladder into the ureters).

Research Methodology: into the bladder through a catheter, conducted along the urethra, a water-soluble contrast agent is injected until the urge to urinate. Produced two shots: the first - immediately after the filling of the bladder, the second - during urination. In boys, the second picture is taken with the pelvis spread 3/4 to render images on the urethra throughout. For the prevention of urinary tract infection research carried out under the "guise" of antibiotics.

There are 5 degrees of PMR. The criteria for classification is the "height" throw urine and the expansion of the ureter.

In addition to identifying the actual reflux, determining its extent, it also allows you to get information of the urethra and oprohodimosti suspected bladder dysfunction.

For more information about the state bodiesurination in children with VUR allows you to get intravenous urography, the study of the bladder, cystoscopy, and laboratory tests. The residual function of the affected kidney is determined based on the radioisotope study as a critical function of violation elimination of reflux is not always appropriate and optimal care for patients may be the removal of a kidney.

The treatment of vesicoureteral reflux

Methods of treatment of different forms of PMR differother. When the primary reflux occurring against the backdrop of the anomaly ureteral orifice must be an impact on output ureter (the endoscopic or surgical intervention).

In secondary PMR untreated disease leading to their occurrence (the treatment of cystitis, bladder dysfunction, restoring patency of the urethra).

The form specified under reflux for cystoscopythe mouths of the ureters. Therefore, to select the correct treatment strategy is necessary to examine the child in a specialized urology hospital, which has extensive experience in the field of urological endoscopy. 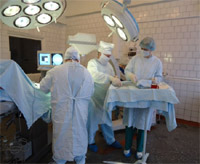 So far, in most Russianurological hospitals practiced surgical treatment of vesicoureteral reflux. The task of antireflux surgery is to create a sufficiently extended submucosal ureter. At the same time the urine filling the bladder presses the elastic top wall of the ureter to the bottom, lying on a pretty tight muscle layer of the bladder, which provides antireflux valve function.

Despite the high effectiveness of surgicalinterventions, all of them have significant drawbacks: high trauma, the need for long-term combined anesthesia. For a free outflow of urine postoperative urinary tract should be mandatory temporarily drained tubes that appear on the skin. The first few days after surgery, children spend in intensive care units as well as the need of intensive care and narcotic analgesia. Duration even uncomplicated hospital stay after abdominal surgery is based on the nature of suffering interference from 14 to 30 days.

It is necessary to take into account the possibility of early and latepostoperative complications such as bleeding, exacerbation of pyelonephritis, cicatricial narrowing of the anastomosis (ligation site of the ureter to the bladder), recurrence of vesicoureteral reflux. The last 2 complications require repeated operations on the ureter, which in the conditions of scar tissue are significantly heavier and their efficiency is lower than the primary.

The method consists in restoringimpaired antireflux ureteral function by the introduction of its output under the department of inert liquid ( "indifference" to human tissue) polymer. The polymer forms a mound, which after curing provides rigid support for the ureter, the upper wall of which, adhering tightly to the bottom, provides antireflux valve function.

The intervention is performed during cystoscopy undershort-term inhalation (a mask) or intravenous anesthesia. Duration of treatment is on average 10-15 minutes. The severity of the interference is determined by how easily a child suffers anesthesia. As a rule, 2-4 hours the patient is completely normal. After 3-5 days the children are issued under outpatient monitoring. Before discharge is conducted pyelonephritis antibiotic prophylaxis.

Control examination was carried out in 3-6 months. repeated endoscopic procedures performed at relapse PMR. Up to 85% of patients get rid of the TMR after the first procedure.

Thus, high efficiency at lowtrauma, in our opinion, specifies the priority position of the endoscopic procedures in relation to anti-reflux operations. A small proportion of patients with PMR unremovable endoscopically, can be operated on without the technical difficulties associated with the previous endoscopic treatment.