With this disease, everyone came across: not at home, so in close relatives. What is ischemic heart disease, what are the causes of its origin, the main signs, which preventive measures can be taken to reduce the likelihood of ischemia or its complications. Learn from this article.

Among the diseases of the cardiovascular system of one of the most common is ischemic heart disease (or IBS, ischemia, coronary heart disease, coronarrikerosis). Ischemic disease is common in all economically developed countries, it can be said that the whole world stands before the threat of its epidemic.

What is the ischemic heart disease? This term is made to call a group of cardiovascular diseases, which are based on a circulatory disorder in the arteries that provide blood cord muscle (myocardium). These artery are called coronary, hence another name of ischemic disease – Coronary heart disease. Ischemic heart disease can occur in acute and chronic forms.

The acute form of the CHD is manifested in diseases such as acute myocardial infarction, sudden coronary (or heartfelt) death.

The chronic form of IHD is manifested by angina, various types of arrhythmias and heart failure. These forms can occur both individually and at the same time.

Its name ischemic heart disease received on its underlying process, which is called ischemia. Ischemia – This is anemia, insufficient blood access to a body that is caused by a narrowing or complete closure of the enlightenment in artery. The so-called transient ischemia may occur in a healthy person as a result of the physiological regulation of blood supply. This happens, for example, with a reflex arterial spa, which can be due to the influence of pain, cold, hormonal changes, such as emissions in the blood of adrenaline during stress.

Ischemia longer, i.e. already leading to pathological processes, can provoke biological stimuli (bacteria, toxins), it can be a consequence of the blockage of the artery thrombus, narrowing the lumen of the vessel during atherosclerosis or inflammatory process, the sample of the artery tumor, the scar, the foreign body and T.D. Depending on the degree of violation of the inflow of blood, from the rate of development and duration of ischemia, from the sensitivity of tissues to a lack of oxygen, from the general condition of the body, ischemia may end up with a complete restoration of the affected organ or tissue, but can lead to their necrosis, that is, partial or complete sacrifice. 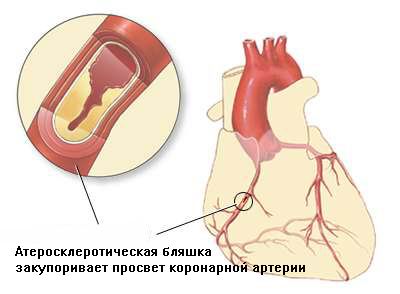 Ischemia develops not only in heart arteries, there is, for example, cerebral ischemia (violation of cerebral circulation), ischemia of the upper and lower extremities. But the most sensitive to ischemia are the central nervous system and the heart muscle.

Heart ischemia most often causes atherosclerosis, at which there is a narrowing of the arteries due to the accumulation of cholesterol sediments in their walls, so-called atherosclerotic plaques. Actually, IBS – This is one of the private options atherosclerosis, which strikes the coronary artery. From here there is another name IBS – Coronarclerosis. CHA proceeds in most cases waveguide, exacerbation of the disease alternate with the periods of relative well-being, when subjective manifestations of the disease may not be. The main symptom of the CHD is considered angina, that is, the parietal pain in the heart. At the initial stage of IHD, angina attacks occur during physical or psychological load. Furious course of the disease is usually long: it is possible to develop decades. In typical cases, after a while, angina attacks occur not only with load, but also at rest. During periods of exacerbation of the disease at its later stages, the threat of the development of myocardial infarction.

Mostly ischemic disease arises from people over 30 years old, and men sick more often women. Half of deaths as a result of cardiovascular diseases accounted for ischemic disease. In Russia, the problem is especially sharp: in our country the level of prevalence of IBS and mortality from IBS is one of the highest in Europe. In addition, among patients with ischemic disease, there are very frequent cases of disability and, accordingly, partial or complete disability loss. All this turns the prevalence of IBS from a purely medical problem in the problem of socio-economic, which can also touch any of us. Therefore, each person needs to own at least initial information about what ischemic heart disease is what causes of its origin, the main signs, which are the risk factors for the development of the CHA and which preventive measures can be taken to reduce the likelihood of ischemia or its complications.

Arrhythmia of the heart