The value of the main indicators of the general blood test

Diagnosis and tests
by admin

Common Clinical Blood Analysis - the most common analysis, to take which one person accounted for. Common blood test is widely used as one of the most important methods of examination with most diseases, and in the diagnosis of diseases of the blood formation system - it is given a leading role. Changes in the blood are most often nonspecific, but at the same time reflect changes due to the whole body.

The cell composition of the blood of a healthy person is quite constant. Therefore, various changes in its occurrences may have an important diagnostic value. With some physiological conditions of the body, the qualitative and quantitative composition of blood often changes (pregnancy, menstruation). However, small oscillations occur during the day under the influence of food intake, work and T.NS. To eliminate the influence of these factors, the blood for repeated analyzes should be taken at the same time and under the same conditions.

Special preparation for research is not required. It is recommended to exercise blood for an empty stomach or at least 2 hours after the last meal. Execution term: 1 day.

Only a doctor can completely interpret the general blood test. However, looking at your analysis, you can also have a general idea of ​​your health.

Hemoglobin - the main component of the erythrocytes (red blood flows of blood), is a complex protein consisting of gemma (iron-containing) and globin (protein part). The main function of hemoglobin consists in transferring oxygen from the lungs to tissues, as well as in the removal of carbon dioxide (CO2) from the body and regulating the acid-base state.

Erythrocytes - (red blood calves) - the most numerous uniform elements of blood containing hemoglobin transporting oxygen and carbon dioxide. Are formed from reticulocytes to exit them from bone marrow. Mature erythrocytes do not contain kernels, have a two-way disk. The average lifetime of red blood cells - 120 days.

To lower the level of erythrocytes (erythrocytopenia), lead:

The number of erythrocytes can physiologically slightly decreased after meals, in the period between 17.00 and 7.00, as well as when taking blood in the position of lying.

Platelets (blood plates) - small nuclear-free cells with a diameter of 2-4 μm, the lifespan of which is 7-10 days. In blood vessels, platelets can be located near the walls and in the bloodstream. In a calm state (in the bloodstream) platelets have a disk shape. When the cells are activated, the platelets acquire sphericality and form special increases (pseudo-trimmed). With the help of such growlings, blood plates can stick together with each other or adhere to a damaged vascular wall. Platelets are involved in coagulation processes.

The number of platelets varies depending on the time of day, as well as during the year. The physiological decrease in platelet levels is noted during menstruation (by 25-50%) and during pregnancy, and raising - after exercise. Normal platelet indicators in a healthy person - 150-350. 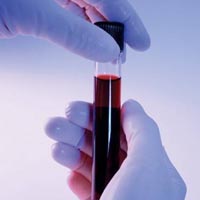 Erythrocyte sedimentation rate (ESO) - blood separation rate in a test tube with added anticoagulant 2 layers: upper (transparent plasma) and lower (axi-rated red blood cells). The erythrocyte sedimentation rate is estimated at the height of the plasma layer formed (in mm) in 1 hour. The specific mass of the erythrocytes is higher than the specific mass of the plasma, so in the tube in the presence of an anticoagulant under the action of gravity of the erythrocytes settle on the bottom.

With acute inflammatory and infectious processes, the change in the rate of sedimentation of the erythrocytes is observed 24 hours after increasing the temperature and increase the number of leukocytes.

EXACTOR EXAMPLICATION Changes depending on the set of physiological and pathological factors. SE values ​​in women are somewhat higher than that of men. Changes in the protein composition of blood during pregnancy lead to an increase in ESO during this period. During the day, it is possible to fluctuate the values, the maximum level is marked in the daytime.