Home›Endocrinology›Meet: We are not dwarfs - we are small people

Meet: We are not dwarfs - we are small people

Dwarf people, their lives, problems of dwarf. Do we know much about them? Let's get acquainted with miniature people

Are you intellectual to dwarf?

Despite a significant number of dwarfs with big talent and abilities, many still believe that dwarfs - mentally underdeveloped people.

This widespread misunderstanding may have been provoked by the fact that at the turn of centuries in the French and Swiss Alps lived several thousand carlik shepherds. They all had goiter and suffered critinism. Drink water from cleaned glaciers and snow, eating, devoid of iodine, led to illness. The disadvantage of iodine caused underdevelopment in general and in particular glands governing growth. All this was the cause of small growth, squinting, the development of a huge goiter and pronounced cretinism.

Is the dwarfishness of hereditary?

«Golden century» Dwarfs in Europe was the era of revival. Every courtyard, be it royal, princely or belonging to the aristocrat, abbot of the monastery, simply could not do without the presence of dwarf in him as a court jet.
Russian kings also pledged dwarfs. There was no king who would not hold several dwarfs at the court. Stalin continued these traditions, having a protege with a certain Evhor, which he did in 1937 in the chief of the secret police. Ezhov played a major role in Stalin's repression, during which millions of people died.

The smallest of small

Lucia Zarab was one of the most famous carlitz in history. She was born in Mexico in San Carlos in 1864. This doll like a woman in 17 years old weighed less than the usual home cat - 2.2 kg. At the moment of birth, she weighed a little more kilogram. Experts considered it the smartest person in the world, although over the years she «allowed» to recover up to 6 kg. She was less than 50 cm. 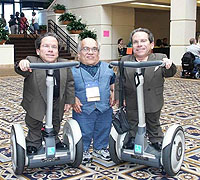 Revered in the former times, respectable, widely known dwarfs today, alas, cause regret. In the previous times, the strengths of this world loved to surround themselves with dwarfs, and simple people in their mass came to the circus to look at them. In the role of comedians, dwarfs found the meaning of life and the ability to realize their abilities. However, a modern society that has created a kind of network from «Normality», built the unrealistic wall between them and people of normal growth. Becoming the subject of jokes, disrespect, excessive interest, dwarfs, as well as the giants, are forced to face a lot of everyday problems of everyday life.

Use of public telephones, walking in stairs, riding in public transport, all this is common to us, people of normal growth, for dwarfs sometimes becomes an irresistible obstacle.

To be able to somehow solve your problems, today's dwarfs are collected in partnerships, such as «Small people», which was founded in 1957 Bill Barka. Thanks to the efforts of this organization, the first kind of kind in history, its members - more than 35,000 American dwarfs - have benefits in obtaining work, organization of recreation and sports events and, most importantly, the ability to establish contacts with themselves like a network of special agencies. An example of Americans soon followed other countries. Today, similar clubs of dwarfs are created in Germany in Holland, Great Britain, Paraguay and Brazil.