Thyareoxic crisis is a complication of diffuse nodal goiter and develops with late diagnosed or poorly treated thyroid disease. The crisis trigger mechanism is to increase the level of thyroid hormones.

The mechanism of development of thyrotoxic crisis

Tireotoxic crisis - this complication may occur in untreated patients after unreasonable cessation of tireostatic preparations, after receiving a radiative iodine or in the first days after removal of the thyroid area. With an undiagnosed or blighted diffuse toxic zob, thyrotoxic crises can provoke mental injury, sharp surgical or infectious diseases, traumatic or insufficient anesthetics during surgery, as well as physical activity, intoxication, toxicoinfection, childbirth and other factors that violate the normal life activity of the body.

The starting mechanism of the thyrotoxic crisis is a sharp increase in the blood of thyroid hormones.

Basic symptoms of the disease

In the clinical picture of the disease, you can clearly identify 2 periods: 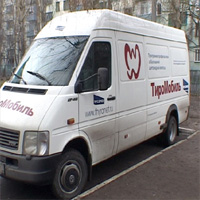 With the further development of the crisis due to increasing oxygen starvation and impairment of thermoregulation, mental motor arousal arises in the flesh to acute psychosis, hallucinations, delirium with temporary permanent of consciousness. Patients take a characteristic posture with scattered hands and legs. There are frequent and random movements of the limbs. After 12-24 hours, sharp muscular weakness are developing to complete adamis and loss of consciousness. The body temperature rises to 42 degrees, the pulse disappears, arterial pressure drops, and the patient dies with the phenomena of cardiovascular failure.

Treatment of thyrotoxic crisis is aimed at reducing the level of circulating thyroid hormones circulating, elimination of cardiovascular and vegetatively nervous disorders and the relief of adrenal failure. The patient must be in the hospital.

In severe cases, the patient is cooled, and such drugs are introduced as amidopyrin, analgin with diphedrol and other.

Prevention of thyrotoxic crisis is primarily in timely diagnosis and proper treatment of thyrotoxicosis. Patients with thyrotoxicosis should always be refracted from any surgical interventions (unless, of course, they are not associated with the threat of life). Before the operation on the thyroid gland, a patient must pass a thorough examination and good treatment.