The accumulation of fat in hepatic cells is often a liver response to
Various intoxication (toxic effects). Sometimes this process
associated with some diseases and pathological conditions
organism (for example, with starvation).

Most
Probably causes of the development of fat hepatosis are: Diseases
gastrointestinal and biliary tracts, obesity, sugar
type 2 diabetes, impaired intestinal digestion syndrome and
suction, gluten enteropathy, Vilson-Konovalov disease and
Some other genetically determined diseases, chronic
Alcoholic intoxication, some medicines (corticosteroids,
estrogens, tetracyclines and others.), bacterial infections, viruses,
systemic diseases and a number of other diseases and states (strict
Vegetarianism and others.). 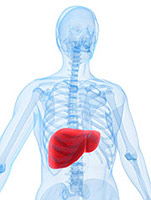 The liver dystrophy is often combined with dyskinesia of the gallbladder, especially in the presence of gallway disease.

Moderately
pronounced fatty dystrophy of hepatocytes accompanies many
Diseases and intoxication. In particular, almost all chronic
Viral hepatitis, especially hepatitis C, often accompanied by fatty
dystrophy of the liver. In the development of fat hepatosis, it is not excluded
Genetic predisposition.

Despite the fact that
Fat hepatosis certainly decreases the functional state of the liver,
With traditional laboratory tests, confirm these violations
almost impossible. Taking into account the cause in patients often detected
other subjective and objective symptoms associated with the main
Disease. For example, liver fatty dystrophy, which has developed in connection with
chronic alcohol intoxication is often characterized
decline in appetite, shortness of breath and other symptoms. Sometimes there are complaints
on the severity and discomfort in the right hypochondrium, increasing
Motion. Only computed tomography and magnetic resonance
Tomography allow in some cases to identify fat infiltration
liver. With the help of these methods, the focal fatty
Filtering of the liver. But even in these situations, the diagnosis is confirmed
only a sight biopsy liver under computer control
Tomography.

Sometimes liver dystrophy develops in people
unfortunately. In any case, when it fails in this situation
establish any possible reason for its development; it is believed to
cryptogenic (idiopathic) form.

How is the treatment of fat hepatosis

Justify
and systematize the treatment of fatty hepatosis in such a variety
The reasons for its caller is quite difficult. Therapy should be directed
to eliminate reasons for elimination of impaired digestion syndromes and
Suction, to restore the liver function. At the same time excluded
Reception of some drugs and alcohol abuse.

If
The causal factor is eliminated, the course and symptomatic
treatment, then the patient should be recommended to remain under medical
observation for a year, and possibly longer. Every 2 months
It should be assessed well-being and physical status, 1 time in 3 months
Repeat studies of serum transaminases and 1 time in 6 months
carry. Treatment to extend for 1 year and more.

In the conditions of the progression of hepatic insufficiency, liver transplantation may be required.

Study
Therapeutic efficacy of ursodoxichetic acid preparations (UDHK).
It is assumed to have the last cytoprotective,
Membrane-stabilizing action. In pilot studies
Ursodoxichetic acid (at a dose of 13-15 mg / kg / day) for 12 months
accompanied by a significant improvement in the indicators of hepatic tests,
decreasing liver steatosis phenomena, without significant mass reduction
Body.

The use of drugs is relevant,
containing «essential» phospholipids that are the main
elements in the structure of the shell of cell organelle liver and provide
normalizing action on lipid metabolism, proteins and on
disinfecting function of the liver; Restore and save
Cellular structure of the liver. For example, the drug Esssential N.

Food for a healthy liver