Intestinal colic - a frequent reason for visiting a pediatrician in the first 3 months of the child's life. The problem is associated with a combination of many factors against the background of the general immaturity of the body. About what caused colic and what to do with them, it is worth telling more. 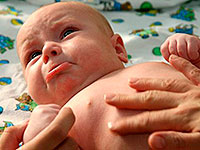 Before you start the conversation, we clarify that «colic» comes from the Greek word «Colikos», denoting any pain in the intestines. But what is called colic in children — Potted painful abdominal syndrome, — Usually due to two main reasons:

The main predisposing factor in the occurrence of colic is the incomplete splitting of fats and carbohydrates, which in most cases begins with the third or fourth week of the development of the infant. As a result, the spasmodic reduction of the intestinal wall occurs, which leads to the appearance of a sharp pain. In addition, impaired motor functions of the gastrointestinal tract additionally contribute to the reinforced accumulation of gases in the intestine of the child against the background of dysbacteriosis and air swallowing during feeding.

Medical statistics notes the most frequent appearance of intestinal colic in late children or in the case of a large difference between the spouses, as well as with complicated pregnancy and childbirth. In general, it is often about long-awaited children in families with a high level of wealth. A high level of anxiety inherent in these families encourages parents to various additional surveys of the gastrointestinal tract of the baby and to unreasonably frequent appeals to the therapist.

The appearance of pain is observed in the same period: usually during feeding or immediately after it. The belly of the baby will break and tense, the legs are tightened to the front abdominal wall, hands pressed against the body. The attack can last from a few minutes to 2–3 hours. Episode of intestinal colic is almost always accompanied by a superior cry. The baby is strongly dried with legs, at that moment his skin covers acquire a purple-red tint. Spastic abbreviations are quite often accompanied by tightening or vomiting, but pain when palpation of the abdomen or the tension of the abdominal wall muscles for functional colic is uncharacteristic. The extension of gases and defecation usually bring a child a significant relief, it calms down and its condition is significantly improved.

You need special patience and the ability to listen to the recommendations of the specialist, as well as the understanding of the fact that as the intestine ripening (as well as the body as a whole) is a transit state characteristic of the adaptation period, passes without a trace and irrevocably.

But the so-called «Red flags» — The presence of blood in feces and vomiting masses, as well as high body temperature — must become a serious signal for parents. Attention should also be paid to tense even in calm state the baby's tummy, a full rejection of food, lack of an independent chair. Such symptoms may accompany the diseases of the gastrointestinal tract, the urogenital system, some neurological disorders. 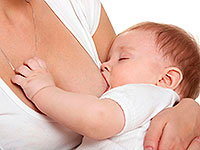 Reducing the frequency and severity of intestinal colic can be achieved by observing the rules of care and breastfeeding. The pediatrician and the patronage sister should not only explain the mothers of the techniques and the skills of the right position of the kid during breastfeeding, but also consolidate them. So that the child is easier to suck, he needs to stay in his chest in the position when the tummy pressed to the mother's body, not less than 20 minutes. At the same time, breaks for dosage milk receipts are necessary. The body and neck of the baby must remain on the same line, facilitating the flow of milk in the stomach.

Proper breastfeeding should be provided with a balanced mother meal with a limitation of fatty products and active seaterism provocateurs, such as cucumbers, cabbage, beans, apples, pears and corn.

Step-by-step help of the baby

We offer a scheme that allows with minimal drug load to assist baby and calm his parents. In addition, this actions algorithm will help to distinguish physiological colic from a serious illness, as well as protect the baby from unjustified and unnecessary interventions (which is happening, alas, quite often).

Recommendations of some pediatricians to yield to breastfeeding and transferring a child to a lactose-free diet do not find support from modern specialists. It has been proven that such a reception is contrary to a reasonable approach, because in the first weeks and months of the development of the baby lactose is essential.