This summer in some southern regions of Russia is there, then there are outbreaks of serous viral meningitis. A large number of children were hospitalized with suspected illness, in some cases the diagnosis was confirmed. About what enterovirus serous meningitis is in the article.

Serous Meningitis — This is a group of diseases of viral origin, characterized by serous inflammation of brain shells. In rare cases, serous meningitis develop after the crank-brain injuries and against the background of various intoxication.

Serous virus meningitis are more often detected in children of preschool and younger school age, in older children — much less often, adults, as a rule, the disease is bypass. The pathogens of the primary meningitis are the cokes and ECHO enteroviruses, sometimes there are cases of secondary meningitis occurring against the background of epidemic parotitis. We are interested in enterovirus meningitis, when he arises, as it appears, how to deal with him.

Enterovirus serous meningitis are found both in the form of separate sporadic diseases and in the form of flashes, which are recorded mainly in the spring-summer period. The current summer of the South of Russia is in the zone of increased risk, the epidemics of meningitis among children constantly flarelves. High contagiousness of viruses causes an increase in morbidity in organized children's teams, preschoolers and children 7-14 years old.

The source of infections are patients and externally healthy carriers of viruses. In some regions, the frequency of carrier carrier reaches 50%.

Path transmission of infection: fecal-oral and air-drip. To infect enterovirus, badly wash hands enough, use foods that «treated» flies or to be among the sick people. Most often, the causative agents of serous meningitis are transmitted through dirty water when eating it in food or swallowing during bathing.

Finding into the nasophal, a throat and digestive tract, the virus causes the appearance of catarrhal symptoms and signs of lesion of the gastrointestinal tract. The child appears and pain in the throat, passing, occurring pariety abdominal pain, diarrhea. The clinical picture resembles a banal cold, slightly «Adjusted» Intestinal syndrome. This period is systematically and continues from several hours to several days. As soon as the virus penetrates into the blood, the temperature is sharply rising and other symptoms of intoxication appear: weakness, lethargy, headache, increased fatigue, decreased appetite. With blood current, the causative agent reaches the central nervous system, striking the soft brain shell, causing the development of serous viral meningitis and the appearance of neurological symptoms. 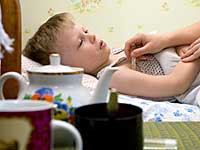 Older children are excited, swarming, complain of head and abdominal pain. There are frequent vomiting that do not bring relief. Less often adamine, lethargy and the state of the dormant.

The severity of the child's condition is evidenced by its appearance: blush eyes and face with a pronounced pale nasolabial triangle, dry hot leather. Sometimes a polymorphic rash appears on the body, resembling cort or rubella.

For serous meningitis, a certain change in the composition of the spinal fluid is characterized, when a child is suspected, a cinema puncture is carried out. In addition to the diagnostic value, it is a healing procedure, reduces the pressure of the liquor, reduces the pressure on the brain and facilitates the symptoms of the disease.

After 2-4 days of meningitis symptoms disappear, but in 10-40% of cases for 5-7 days they return again to disappear after treatment forever. Rarely after transferred serous virus meningitis, asthenic syndrome is observed.

In early age, enterovirus infection can lead to serious complications, hit the brain head and back and cause the development of meningoencephalitis and meningoencephalomyelitis.

When epidemic serous meningitis is diagnosed?

In the period of outbreaks of the disease to put a preliminary diagnosis of serous meningitis, sufficiently symptoms of the lesion of the brain shells and the fact of staying the baby in the children's team or the region where cases of the disease are registered. Other serous meningitis do not have such high contagiousness and do not cause epidemics. Treatment is assigned on the basis of the clinic, blood research data and liquor.

Children who have surpassed serous meningitis are subject to the dispensary observation of the neuropathologist.

What to do to not get sick of serous meningitis?