That in the light of the newer than the well-forgotten old? It is such a well-forgotten old one can also be considered the drug «Potargol», Successfully used in the 30s-40s last century, then lost its relevance and now the resurrected. Everything «per» and «against» «Potargola» - in our article. 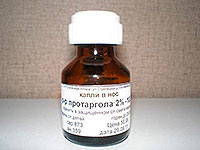 «Potargol» — This is a brown-yellow powder odorless, slightly bitter, slightly binding, changing under the action of light. The basis of the action of this antiseptic — Principle of suppressing bacteria silver ions at a certain concentration. As a drug, the aqueous solution of silver has its adherents and opponents. «Potargol» today is regarded by many users from different points of view, and therefore deserves more detailed and detailed consideration. It is known that many years have already had opinions about «Popargol» diametically diverged, while medical statistics leads the following data: for — 82%, against — 18 %.

Silver at a certain concentration really has the ability to kill or restrain the growth of certain types of bacteria — This is a plus. The importance of the drug should be attributed to the fact that «Potargol» Does not get used to and they can use enough long time. It is also worth noting its quite affordable price.

At the same time, being a heavy metal, silver can accumulate in the body and slowly output. Finding into the blood, his ions are spread and settled in the liver, skin cover, spleen and kidneys, bone marrow, endocrine glands, in lens and cornea — This is minus. In addition, among the disadvantages there is a small shelf life of the drug, as well as the possibility of its acquisition only in pharmacies, where there is a prescription department.

Why minus, you ask, because silver — Noble trace element? Yes, but why our body is superfluous «shine» Live and figurative sense? Similar «Silver stocks», When a total of more than grams of silver accumulates in the body, may cause disease named argirosis.

In America, in the 30s of the 20th century, cases of argographs were often noted in connection with the reception of droplets from a cold containing silver. In the 1990s, a burst of using colloidal silver, which came already in a category «Food additives» and not requiring special permission.

The US Department of Health and today remains on positions of careful use «Potargola», By providing the right to choose and determine your relation to the drug to the consumer.
At the same time, it is necessary to note those studies of American authors who claim that colloidal silver is absolutely harmless to humans and plants. The authors argue that the aqueous solution of this metal or silver — Proteinat, where metal concentration reaches 30%, — has the ability to effectively treat a runny nose in comprehensive therapy, and propose to consider it as an effective remedy for adenoids in a child.

Myths and reality about «Popargol»

«Potargol», Presenting a water solution of silver, has the ability to form a protective film on the surface of the mucous. It is known that application «Potargola» Reduces the sensitivity of the skin and mucous membrane, narrows the vessels, suppresses inflammatory reactions. In addition, the skin saturated with silver ions is especially sensitive to the effects of sunlight and exposed to accelerated pigmentation.

At the same time, some media and today spread the myth that «Potargol» — This is an effective tool in treating such serious diseases such as cancer, HIV infection and tuberculosis. Such assurances can be questioned, since silver solution is only a local antiseptic and anti-inflammatory drug, which is used in the treatment of inflammatory and purulent processes in urology, ophthalmology and otorinolaryngology. 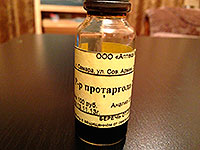 Specialists call a number of diseases in which «Potargol» manifests itself as efficiently. Among them, pharyngitis, conjunctivitis, rhinitis, otitis, adenoids, urethritis, cystitis. In case the drug is used to treat a cold, it is recommended to apply it in partnership with Tui oil, which will help prevent the appearance of significant dryness of the nasal mucosa.

In the form of aqueous solution of silver ions are shown for the treatment of eyes with inflammatory diseases, for example, conjunctivitis. The drug is allowed to use children and adults, recommended by 2–3 drops 2–4 times a day.

For the treatment of ENT diseases «Potargol» You can also use both adults and children in the form of droplets in the nose of 3–5 drops 2 times a day. An important recommendation should be taken into account: before you bite the drug, it is necessary to rinse the rotoglot thoroughly, and then lubricate the mucous membrane.

Urological direction involves the treatment of infections by two percent «Potargol» As washing the bladder and urethra.

Like most drugs, «Potargol» Also has several common side effects:

Rarely, but sometimes it is still noted by the wretchedness, swelling of quinque, atopic dermatitis and even anaphylactic shock.

Not recommended use «Potargola» during pregnancy and breastfeeding, with increased sensitivity to the drug or its constituent.

There is another feature in use «Potargola»: It can only be used freshly prepared, and it should not be stored for a long time even in the refrigerator.