Arrhythmia - disturbances of heart rate onfrequency, regularity, rhythm source. Arrhythmias are divided into paroxysmal (paroxysmal) and chronic. Some arrhythmias are heart reaction to the pathology of other organs and systems in the use of alcohol, smoking, on drugs.

To assign adequate treatment is necessary to determine the type of arrhythmia - that is to fix it on the ECG.

Millions of people all over the world during their lives felt disruptions of the heart.

your
heart beats approximately 100,000 times per day. Each of these reductions
It begins with an electrical pulse, which occurs in the heart.
Cardiac arrhythmias, called arrhythmia - a change in the frequency and
regularity of heartbeats. Rhythm can be too fast, too
slow or irregular.

There are many types of arrhythmias and heart block. Simplistically they can be divided into the following groups: 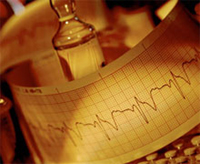 Tachycardia - It is too frequent rate (more than 90 beats per minute..). Tachycardia is divided into two large groups: ventricular and supraventricular.

bradycardia
- It is too slow pulse. It depends upon the age and physical
activity, but in most cases less than 60 beats pulse. min.
considered rare.

extrasystole - this
extraordinary contraction of the heart. In normal sinus impulses occur in
site and then go for the heart's electrical system. When arrhythmia
pulses originate outside the sinus node.

heart block
- When the impulse can not pass through certain areas of the heart
muscles. Sometimes it can be over a full cardiac arrest.


Electrocardiogram
(ECG), a graphic representation of the potential difference occurring during
the work of the heart to the body surface, the device registered under the
called ECG in the ECG. Is an
one of the main methods for diagnosis of cardiovascular diseases.

Holter
monitoring was named after the explorer Norman J. Holter, who
the first to apply this technique in 1961. This method of functional
diagnosis, through which the daily record of the electrocardiogram (ECG), a few leads. ECG recording is conducted continuously for 24 hours.

ECG
on the phone allows you to transfer an electrocardiogram from anywhere
globe, where there is a telephone connection. Patients have at their
disposal of portable devices that allow to register and
transfer to the center of the remote cardiac diagnostics (TSUKD) on
telephone lines of an electrocardiogram (ECG). Experienced doctors TSUKD
analyze the data obtained will be given an electrocardiogram and immediate recommendations
patient.

Methods of treatment of arrhythmia 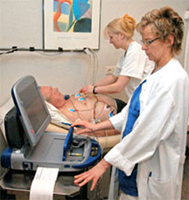 how
Generally, treatment begins with a destination arrhythmia antiarrhythmic
drugs. In some cases this can significantly reduce the
symptoms of arrhythmia.


pacemaker
(Pacemaker, pacemaker) or artificial pacemaker -
Medical device designed to maintain heart rhythm.
The main objective is to maintain a pacemaker or
the imposition of the heart rate to a patient whose heart
It beats often enough (bradycardia), or there is a blockage of the
between the atria and ventricles (atrioventricular block).

A bunch of
people die from sudden cardiac arrest in their daily lives.
Cardiac arrest is often caused by ventricular arrhythmias, which are
Most cases can be interrupted by pacing and
defibrillation.

It combines all previously described methods for the treatment of arrhythmia.