Ads like "blood cleansing" can be foundin medical institutions at all levels and profiles or the Internet, as well as in their own mailbox. What is this mysterious phrase, more like a magic spell, than the name of the medical procedure.

Ads like "blood cleansing" can be foundin medical institutions at all levels and profiles or the Internet, as well as in their own mailbox. What is this mysterious phrase, more like a magic spell, than the name of the medical procedure.

There are plenty of extracorporeal, meaning "outsideorganismic "therapies. The most popular of these three groups: hemosorbtion, plasmapheresis and hemocorrection - in order of increasing complexity and thus efficiency. 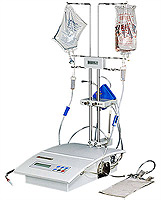 During hemosorption, a patient is taken from a veinblood, pass it through the filter and then the already purified blood is injected back to the patient. This method is based on the fact that many harmful substances contained in the blood remain on the sorbent, which, as a rule, is activated carbon. Obviously, activated carbon and other similar sorbents do not really understand which substances to absorb. Therefore, according to Professor Vadim Kreines, head physician of the Clinic for Gravity Blood Surgery, today doctors around the world rarely use this method: “Normal hemosorption is too crude a method that has many side effects and, in addition, is ineffective compared to other methods.” In our country, however, hemosorption is actively used in many private centers and state clinics.

There is, however, a more modern option.hemosorption, much more effective and less harmful - this is immunosorption. The principle is the same here, only an immunosorben column is used as a filter, which binds only the only specific substance that needs to be removed from the blood. This method has the highest specificity, and therefore the blood returns in its original form, it only does not have a certain harmful factor. Most commonly, this method is used to treat atherosclerosis. It is known that the main cause of this disease is an increased level of cholesterol and complex complexes in the blood - “low density lipoproteins” (LDL). Obviously, in order to fight atherosclerosis, it is first necessary to lower the level of these substances in the blood. With the help of medicines, this is not always possible and, in addition, they have a number of side effects. Therefore, the most effective and popular worldwide method of purifying blood from excess cholesterol and LDL is just immunosorption. In Russia, this method is used, for example, at the Institute of Cardiology. A.L. Myasnikov, in the Central Clinical Hospital, however, it is not yet possible to widely use this method in Russia. Nikolai Kalinin, professor, head of the extracorporeal blood purification department of the Hematology Research Center of the Russian Academy of Medical Sciences: “The problem is that not every patient can afford it. The main tool - a column for immunosorption - costs about $ 3 thousand in Russia, while according to the domestic method, each patient needs two such columns. And although they can be used more than once, their shelf life is no more than two years. ” By the way, in the West this procedure is much more expensive: the column price there reaches $ 15 thousand, and it is not customary to use them several times there.

Another, much more popular wayexposure to blood - therapeutic plasmapheresis. In the first approximation, this process is as follows: the patient's blood is separated into cells and plasma, and then the cells are returned to the blood and saline injected enriched necessary instead remote plasma proteins. During the next week all of the components of the plasma are reduced again. Thus a different amount may be removed by plasma. 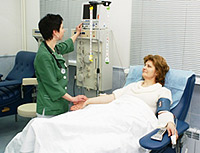 The actual healing effect is based on the fact thatharmful factors are removed from the body along with the plasma, but the body does not experience serious losses because the cell mass returns completely. Many experts consider this method universal. However, as in the case of hemosorption, some specialists, guided by the principle of “there will be no excess,” strongly recommend plasmapheresis to all people as a preventive cleansing of the body. The idea of ​​the proponents of this approach is straightforward: since thousands of toxic substances enter the body of a modern person every day, natural defense systems cannot cope with this flow, and therefore the body must be “cleaned”. However, this idea is highly doubtful for several reasons. First, plasmapheresis is a radical intervention, and for no apparent reason it, like any other operation, should not be performed. In addition, it is obvious that many compounds do not accumulate in the blood, but in the tissues and organs, and even total "blood washing" does not contribute to cleansing. And, finally, thirdly, most diseases proceed according to very complex mechanisms, and it’s at least useless to clear the bloodstream using the “Augean stables” method.

The cost of these procedures, depending on thetechnology and equipment used, varies widely. One procedure is simple gravitational plasmapheresis using a centrifuge, it is worth, on average, about 1 thousand. Rubles. This procedure is done partly by hand, so no risk of human error. Simply put, an inattentive assistant can observe the technology or, God forbid, your bag to mix the blood with someone else. At all stages of the hardware technology plasmapheresis carried out automatically, using sterile equipment. But the cost of such a procedure significantly higher, on average, from 2 thousand. Rubles to $ 250.

In fact, a progressive Western medicineAll the above methods are not used as often. Western doctors have concluded that simply removing these or other blood components does not always make sense. Like we said, many systemic and chronic diseases at all using these methods to heal, to put it mildly, is not effective. Meanwhile, to date, we developed a lot of manipulation of the blood, which change its properties.

So, for example, with photomodification, the patient’s bloodirradiated with ultraviolet or laser radiation. Another technology - cryoprecipitation - is based on the property of certain blood proteins to precipitate at low temperatures. That is, the plasma obtained by conventional plasmapheresis is cooled, its pathological components precipitate, after which the purified modified plasma is returned to the bloodstream. The reverse procedure - thermal precipitation - was developed at the center of gravitational blood surgery and, according to its creators, is effective, for example, in the fight against stroke.

As practice shows, also termopretsipitatsiyaIt is very effective for patients with acute myocardial infarction. When occlusion of the vessel of the heart muscle, which he feeds, dies. This in itself is not dangerous, but the destruction of these cells produce a disastrous effect on the surrounding tissue, resulting in myocardial area grows many times. Therefore the main task - to limit the proliferation of myocardial area. This can be done if, immediately after the formation of myocardial blood removed from the cellular debris. It is known that a heart attack is not dangerous in itself, but its complications - cardiac disorders and re-infarction. The precipitation is based on thermal property of some pathological proteins to precipitate at high temperatures. Therefore, we heat the patient's blood plasma to 400-560 degrees Celsius, remove from it fell "malicious" proteins.

Another direction in modern hemocorrection isextracorporeal drug therapy. Its meaning is that the medicine does not enter the body simply, but leaves directly on the surface or inside the blood cells. According to Professor Kreines: “A drug can be enclosed in blood cells. Different blood cells capture different drugs. So, for example, it is known that white blood cells - white blood cells are able to absorb various molecules if given a stimulus. We secrete white blood cells, stimulate them, and then add a drug that the white blood cells absorb. With this technique, the minimum concentration of the drug accumulates as much as possible exactly where they are needed. ”

As apologists claim extracorporealhemocorrection, these methods are much more effective than drug therapy. Therefore, the main indication for these are complex systemic disease which responds poorly to conservative therapy. However, from the point of view of modern evidence-based medicine, these, as well as any other efferent methods are not checked. But check the effectiveness of the objective of these methods is almost impossible, because it requires sophisticated technical resources and qualified personnel. Since the cost of one of such treatments can reach $ 1 thousand. Obvious that extensive studies on the subject can not be carried.