The value of platelets and megakaryocytes with thrombocytosis

Platelets represent the red bloodplates, which are formed of giant cells in the bone marrow megakaryocytes. Increased levels of platelets in the blood has been called thrombocytosis.

The role of platelets in the body 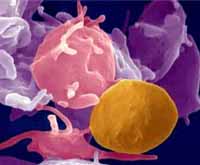 Platelets, or platelets, are formed fromgiant red bone marrow - megakaryocytes. In circulating platelets have a round or slightly oval shape, their diameter is less than 3.2 microns.

The normal platelet count in a healthy personis 200-400 thous. in 1 mm. The increase in the number of platelets is the name "thrombocytosis". Under natural conditions, the platelet count is subject to considerable fluctuations (their number is growing at a painful stimulation, physical exercise, stress), but rarely goes beyond the norm.

The main purpose of platelets - involved inthe process of hemostasis - stop bleeding. An important role in this reaction belongs to the so-called platelet-derived factors are concentrated mainly in the pellet and the platelet membrane.

Platelets are involved in protecting the bodyfrom foreign agents. They have phagocytic activity contains immunoglobulins that secrete substances that can destroy the membrane of certain bacteria. Furthermore, they discovered peptide composition factors that cause the transformation of "zero" count (0-cells) in the T- and B-lymphocytes. These compounds during activation of platelets and secreted into the bloodstream at a vascular injury protect against pathogen ingress.

The concept of thrombocytosis

After the automatic counting formulaBlood platelet counts become an inseparable part of the blood test. Thrombocytosis (defined as platelet count of more than 500 g / l at that normal platelet count value is within the range of 150-400 g / l) is detected when randomly or systemic examination (before surgery). It turns out that between 3 and 13% of people who have carried out blood tests at the hospital, the platelet count is greater than 500 g / l, that is, it is a relatively frequent anomaly in the practice of a physician.

Thrombocytosis reasons are numerous, but oftenwe are talking about the secondary thrombocytosis or reactive and very rarely about the primary. In the first case, the platelet count is generally less increased (from 500 to 700 g / l), but the number of platelets is not specific for the diagnosis.

The role of the megakaryocyte - platelet precursors

Megakaryocytes - the giant bone marrow cells,from which subsequently formed platelets. Megakaryocyte is large in size (diameter of the cell is 35-160 microns) and is wrong, divided into a plurality of core shares; it contained a large amount of cytoplasm. Platelets, megakaryocytes as have receptors on their surfaces to thrombopoietin. Thrombopoietin - a hormone that regulates the division, maturation, and yield of platelets in the blood. It is synthesized in the liver and kidneys. Hepatic synthesis of thrombopoietin can be stimulated by the release of substances - interleukins, which are activated in case of an inflammatory syndrome or tumor pathology.