Violation of the doctor's recommendations, self - and here you are - chronic poisoning drugs there. What is the insidiousness of this state?

besides
of cases of acute poisoning
drugs, occurring intentionally or
negligence, there is the concept of chronic drug poisoning of
which will be discussed in this article.

Chronic poisoning drugs - what
it?

When
develop acute drug
poisoning - Symptoms bright and fairly obvious. In chronic drug poisoning symptoms
malaise can be erased and treat the patient at the expense of existing
chronic diseases or side effects of the drug. Many household
chronic poisoning go unnoticed and unrecorded. Accidentally
adopted by the second tablet of forgetfulness, deliberately adopted a third tablet
order to enhance the effect, chaotic reception drugs, co-administration
potentiating each other's products, medicines wrong dosage of
misunderstood instructions or prolonged absence of medical supervision
for the effect can lead to the manifestation of the most toxic effect it seemed
to innocuous substances.

So,
For example, many drugs to combat the symptoms of colds and influenza contain
paracetamol. Hapless ill take one pill after another,
believing that it means different because they have different names. As a result, a
symptoms of colds and flu join drug paracetamol poisoning symptoms -
signs of hepatic or renal failure. To reduce the likelihood of
paracetamol poisoning can parallel receiving acetylcysteine ​​(NAC), which
reduces its deleterious effects on the liver.

at
chronic administration of digoxin there are cases of severe chronic
intoxication, which is due to its cardiotoxic and neurotoxic
action. In addition to the development of intracardiac blockades and often severe violations
rhythm, digoxin can cause paresthesia, changes in color perception to
yellow-green range of Van Gogh, who himself suffered digitalis
intoxication, as well as violations of the gastrointestinal tract activity. Signs of drug digoxin poisoning
can be found in their own, enough to be knowledgeable,
that this is possible.

appointed
for cancer narcotic analgesics are often used
incorrectly, causing symptoms of poisoning
drugs, which in this case is considered to be
addiction.

In an effort to
lead a healthy lifestyle and taking vitamins documented cases of chronic
vitamins intoxication, with symptoms of hypervitaminosis. overdose and
irrational receive aminoglycoside antibiotics exert their
toxic effects in the form of reversible or irreversible deafness.

besides
these drugs have toxic properties overwhelming
the number of medicines if they are irrational and uncontrolled
reception. Also check the compatibility of medicines
together. For information about compatibility with other groups of drugs are listed in
each instruction to the drug. 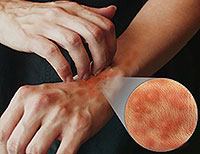 Signs
chronic drug poisoning can be any cardiac,
neurological symptoms manifest renal and hepatic
failure, the development of hepatitis and hepatic dystrophy, appearance
unexplained by other causes of symptoms, changes in consciousness, attention and memory.
Overly pronounced effect of the drug can be received as usual
indicative of unintentional violation of the dosage or change the background
condition of the body. Thus, for example, malignant tumors capable
modify the action of the usual medicines. Carefully read the instructions,
Avoid self-medication and follow their families, help them
properly dosed drugs and do not allow children access to medicines.