What is lactase deficiency

To the body of the child has learned the mother's milk, it contains
nutrients are broken down by specific enzymes. One of them
- Lactose - is located in the intestinal mucosa. it was he who "lots" on
the main components of carbohydrate in the diet of infants - milk sugar,
or lactose (not to be confused with the name of the enzyme!), helping its elements
absorbed into the blood. If enough of the enzyme, the milk
sugar gets into the colon where fermented by lactic acid bacteria.
And this is a favorable environment for microbial growth that promotes
flatulence and soft stools. It appears
lactase deficiency.

one
of its main reasons - the immaturity of the enzymes in the stomach and intestines
weakened and premature children. After lactose activity reaches
only the necessary rules for the 36th week of pregnancy.

Lactase deficiency may occur in the first weeks
a child's life. At the same time the baby becomes restless, he refuses
Food. The chair had frequent, frothy, sour smell and a large
of water. Starting to feed the child, within 10-20 minutes'
You notice that his tummy swells and begins to hum. Scarce can
belch. All this is not conducive to good digestion, so
the baby is not gaining weight. Of course, these symptoms - reason for
an urgent appeal to the pediatrician.

If you suspect a lactase deficiency is the most important analysis - the study of feces on the carbohydrate content.

If a healthy baby, breastfed,
not gaining weight, his green, unstable chair and problems
Skin, before moving it to the artificial feeding and
prescribed by the doctor to pass the examination and treatment, try
see if breastfeeding is organized correctly. 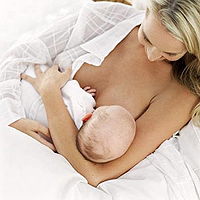 Try to learn the correct attachment to the breast, to establish
frequent feeding on-demand, and avoid the use of pacifiers
nipple and dopaivanie, establish a good night feeding and
negate the breast pump, if any. After about 2-4 weeks
look at the results again. In 99% of cases, no artificial feeding,
any examination or treatment of your baby does not need.

Lactase deficiency, goiter and non-sterile milk
often regarded by doctors as a reason for the termination of breast
feeding. whether such a verdict is justified?

Once a group of consultants but breastfeeding has received
an assignment from his superiors to answer questions about their American
colleagues, consultants, La Leche League (International Dairy League).

The fact that many online parent conferences, and
Also at the meeting with the experts moms often discuss three
question: lactase deficiency, goiter and seeding of milk on
sterility.

What do you mean? The first two states resemble that in
LLL imbalance called front and rear milk and dysbiosis. These
state are by no means terrible pathology, but are discussed
our mothers it is from this point of view. As regards milk seeding
Sterility, the foreign colleagues interested. Why our doctors
conduct this analysis? Consultants but breastfeeding started
to work and that's what found out.

According to the special literature, diseases of carbohydrate metabolism,
associated with changes in the activity of enzymes that break down sugars and
including lactose, are extremely rare. Data for different countries
are not the same. The frequency of these diseases ranges from 1 in 20,000 to 1
200,000 children. Why pediatricians say lactase
failure almost every second child? How could survive
mankind, if this disease (resulting, for example,
Left untreated for malnutrition and death) occurs in the majority of
babies?

The fact that the true lactose intolerance caused by
and genetically related to the complete absence or serious lack of
necessary enzymes, is very rare. And what is the constant
faced by modern doctors? Basically with lactase
failure, resulting in incorrect result
organized breastfeeding.

If you feed the baby every 6-7 hours, collect the milk, decant
after feedings, or shift the baby while feeding it to
one or the other breast, the probability of lactase
failure, the cause of which is the imbalance between the way
called the front and rear portions of milk. It turns out that the child
It feeds usually front milk, containing a liquid and
a large amount of lactose. In the breast between feedings is also going
mainly milk front, the rear is more dense and greasy,
formed primarily during the suckling child. If the shift
kid in 3-10 minutes after the start of feeding to the other breast, and he from
suck the milk carried forward and back and then you have to decant. Kid
is not good to put on weight, it may soon appear
diarrhea with herbs and foam. You will think that you have bad
milk, although it much.

The same situation may be, if the limit of the child to suck,
like strictly for 15-20 minutes. Baby often does not have time to get to
Rear milk and, in addition, not enough to stimulate breast
milk production, if 15-20 minutes, he sucks 6-7 times per day.
Therefore, in addition to the above situation will develop
lack of milk. If you start to lure crumb mixture lactose free,
he will get fat, all relieved, and minds will be strengthened
a myth that milk may be bad and have all modern moms
few.


What to choose: breast or bottle feeding

There are also temporary lactase deficiency. The child has
a properly organized breastfeeding, with a good increase
weight and well-being, in the first 2-3 months of life (sometimes
longer) there frothy stools. If you tell your doctor, who
probably order tests. and analysis is likely to be
found sugar. Child transferred to lactose-free mixture. but
incomplete absorption of lactose - a common phenomenon for the child at the breast
feeding (66% of children aged 6 weeks and 60% of children under 3
months).

One mother, for example, mentioned in the following situation: "your child
experiencing extreme pain! Look what his flatulence! A
you continue to feed him her milk! It is for him - poison!" Of course
well, so there are not all pediatricians. Some doctors, seeing that
child well being, it does not require immediate treatment,
relying solely on laboratory results obtained, and is not appointed
additional inspections.

Let us remember that the last few decades, doctors have been dealing
mostly with the kids who were fed formula. Respectively,
knowledge and many laboratory tests are only applicable to this group
children. The presence of sugar in the stool baby-bottle-a
pathology, but the child is breastfed is
norm! A considerable amount of sugar may be a consequence of said
the above error in the organization of feeding, as the crumb gets a lot of
lactose front rich milk.

This diagnosis is probably the most popular to date. Kid,
as is known, is born with a sterile gut. If from the moment of birth
into his mouth does not get anything but maternal nipple (namely, that
provided by nature), then rather quickly the gastrointestinal tract
Child sown normal microflora. In colostrum and breast
milk contains factors that promote the growth of normal microflora and
inhibit pathogens.

If breastfeeding was organized wrongly (and
This case, unfortunately, the most common), if in the first
day after birth, dating to maternal microbiota, kid started
obtain a mixture, intestinal colonization is far from ideal. But
Even in this case, the mother's milk to help cope with the problems.

The most interesting thing happens when a newborn finally
It is at home. Normal stool crumbs breastfed
liquid, yellow, white lumps can be 7-10 times per day for
bit or 1 every few days, but a large volume. Most often in
kids first months of life is a chair 3-5 times a day. Precinct
Pediatricians often called this normal baby poop and diarrhea
appoint fecal dicbakterioz. (This does not take into account
the fact that the baby first six months of life has the right to dysbiosis in
intestine and stool any, provided that it grows well and
evolves.) Then start the treatment, one of the points that
is a translation of the child, such as a mixture of lactic acid. Pediatricians do not
fault - they are accustomed to a child's chair, located on an artificial
feeding, more dense and monotonous.

Even more interesting situation occurs when, in spite of
reception, for example, a variety of biological products, the child continues
of pathogens, not suitable for his bowel. In that
the case of my mother say that the whole thing in her milk, and insist on
termination of breastfeeding. Illustrative in this respect such
case: the baby, whose mother nursed constantly and in large
quantities sown fungi Candida and hemolytic E. coli.
No treatment for these microorganisms has not acted. mom doctor
convinced that the blame for milk. No supplementary feeding of the child and up to a year, Mom
I took him away from his chest. The child began to get sick often, and mushrooms and chopsticks
remained the same amounts.


What is the seed of milk for sterility

Quite often, doctors began to prescribe another analysis - seed milk
Sterility. Thus in 50-70% of cases appears that in milk
there are a variety of microorganisms, most often gold and
Staphylococcus epidermidis. Mom prescribed treatment
antibiotics and week baby feed mixture, then it is usually
He refuses the breast. Option two: mother and child prescribed
biologics or appoint hlorofillipt.

Meanwhile, the presence of staphylococcus in milk means nothing! AND
Staphylococcus, and Staphylococcus epidermidis live human skin, and
It is also available on most surrounding objects. (For example, when
moving the stack of diapers number of staphylococci in the air dramatically
increases!) Along with breast milk the baby gets
Specific antibodies to assist him when needed to cope with
staphylococcus. It turns out that maternal milk staphylococcus
He comes to the child with protection from him and is not dangerous for the baby!
Moreover, the baby must be in the first hours after birth settle
Mama's staphylococci. From this it will be protected aureus her own
antibodies that receive colostrum and milk. All microflora
mother's organism has "know" baby's immune system, thanks
antibodies cross the placenta.

For crumbs dangerous colonization of the microflora of the hospital, including
hospital strains of staph that is resistant to antibiotics: a
these organisms he is not familiar and settling their skin and
the gastrointestinal tract is dangerous for the baby. If the child does not
opportunities settle my mother's microflora, it is populated with what we have
around. As the saying goes, a holy place is never empty. If not
capabilities "home" a strain of Staphylococcus aureus to settle on
baby, it will be replaced by hospital strains. But it's not scary
child breastfed - the mother will help him,
producing corresponding antibodies.

The presence of staphylococcus in milk has no effect on its quality.
Staphylococcal enterocolitis, which often frightened mothers, urging them
stop feeding their "toxic" milk - an extremely rare condition,
occurring in diseases of the immune system and the emergence of
which promotes artificial feeding! Because if
even the baby for some reason the immune system is weakened, with the mother's
milk, he will still receive significant support. When translated into
artificial feeding, he is deprived of this support.