What is acute intermittent porphyria? What are the symptoms of this disease? As the disease diagnosed? The answers to these questions you will find in this article. 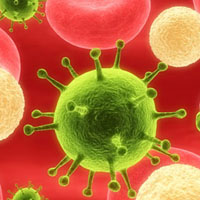 Porphyria or porphyrin disease - almost always an inherited disorder of pigment metabolism with a high content of porphyrins in the blood and tissues.
Manifested photodermatosis, hemolytic crises, gastrointestinal and neuropsychological disorders.

This disease, severe cases which led to the legend of the vampire. The most common species is its acute intermittent porphyria (EPP).

What is the mechanism of the disease? Non-protein part of hemoglobin - heme - turns into a toxic substance that corrodes the subcutaneous tissue. The skin starts to get brown in color, becoming thinner and by exposure to sunlight bursts, so patients with time the skin is covered with scars and sores. Ulcers and inflammation of the cartilage damage - the nose and ears, deforming them.
Coupled with centuries covered with sores and twisted her fingers, it's incredibly disfiguring man. Patients contraindicated sunlight, which brings them untold suffering.

In most cases the disease is detected in the period of exacerbation, which may be induced by many factors. The most common are the following:

The very first description of acute attacks of porphyriaIt was associated with sulfonala. To date, the most common medical drugs - inducers of acute course of the disease - are analgesics, barbiturate and sulfa drugs.

All patients and latent carriers, as well asclinicians faced with the treatment of acute porphyria, must be in possession of a list of drugs that are safe and unsafe for use in acute porphyria. Every year, these lists are updated and published by the Swedish center of porphyria.


As the other very common factor in provoking the disease, it is a hormone, that fact explains the more frequent manifestation of acute porphyria in women compared with men.


Summing up the experience of the researchers involved in acute porphyria, the most typical clinical symptoms of the disease:

Based on these symptoms, it can bethe following conclusion. Acute porphyria can be suspected in any patient entering the hospital with sudden abdominal (paroxysmal) pain, peripheral neuropathy, or with mental disorders. Moreover, in each individual case, it may be observed or a set of these symptoms or only some of them.

Furthermore, this feature of pathology suchthat as a result polisindromnosti its clinical manifestations, patients may come in various profiles of hospitals, where many medical specialists are involved in the treatment process.

In the absence of the correct diagnosis historythe disease can seldom have the following sad end: nausea and vomiting, unbearable severe abdominal pain, lack of motility and stool erroneously suggest an acute surgical pathology.

When misdiagnosis and hence the treatment, acute porphyria are deadly diseases (lethality, on average, 60%).

On the contrary, a clear timely diagnosis and adequate treatment are saving almost all patients, returning them to a normal fulfilling life.