There is no such disease are rare cases where the development would be so overgrown with speculation as porphyria. Which of these conjectures - the truth, and that - a myth? The answer you will find in this article.


The myth of the "infectiousness" of porphyria

Vampires - popular characters. Movies about them appear almost every year - to recall our "Watch". A Western-and do not count. Pure fantasy? Not at all, say the researchers quite serious. Legends of the Middle Ages, which, in fact, nurtured modern cinematic vampires, were the real implications. In other words, not cinematic lived and still live today.
The vampires did not believe a professor of physics at the UniversityCentral Florida Costas Efthymiou. He believes that their existence contradicts the laws of mathematics. After all, long-held beliefs a person bitten by a vampire, and so he becomes. It infects and starts to drink the blood of other people. So what? And the fact that the vampires must then multiply exponentially.

Recently Professor held computing, assumingbloodthirsty werewolf that first appeared in 1600, when about 600 million people lived on the Earth. He - the werewolf - bit one, the - the other, and so on. In two and a half years, according to estimates Efthymiou, all would become vampires and would drink the blood. And if this does not happen, then the vampires were not. And no. We do not suck blood from each other. 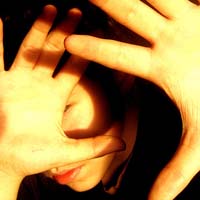 The first mentions of vampires were aboutthousands of years ago. In the Middle Ages legends it became more like werewolves themselves. They were caught and tens of thousands burned at the stake, equating to witches. At the same time in numerous writings inquisitors were vampires signs. Like, they look scary, fangs protrude from his mouth, eyes frantic, aggressive behavior, fear of daylight - hide, come out only at night, attacking people and drinking their blood.

First try to understand what there mightbe the case, Dr. Lee has taken the British Illis. He suggested that the so-called vampires are actually suffering from a severe disease - porphyria. And in the mid 80s medic he supported his colleague, Professor Wayne Tikkanen. And after Illisa insisted that "all European myths about vampires and werewolves were the real implications." What is it?

Porphyria, scientists believe, likely a hereditary disease caused by some defect in a gene affecting the subcutaneous pigments.

Every living organism is saturated with pigments, socalled porphyrins. They include, for example, in chlorophyll, which gives leaves green in hemoglobin, which makes our blood red. in the genetic program failure disrupts the natural exchange of porphyrins. They accumulate under the skin and exposure to sunlight are the catalysts that turn an ordinary oxygen called singlet. And its molecule is known to destroy the cells.

- In severe form of the disease affected tissuesmutilated and doubles over the body, especially the limbs, distorted beyond recognition, facial features, make them frightening - Sergei Vasiliev said. - The skin darkens. Corrosive and gums, baring his fangs. And give them more porphyrins and blood-red tint. From what it seems, as if the blood fangs. At the same time people are afraid of sunlight, from which the skin there are painful sores, burns. He goes out only at night. Begin change in the psyche ...

The most important myth or porphyria - not "vampirism"

Only one does not converge in nosology and porphyrialegends about vampires - the fact, so to speak, blood drinking. Patients with porphyria do not actually feel any need for the blood of humans and animals. Moreover, the use of oral blood in this case is useless, because the problem is not so much the patient is in short supply of red blood cells, but in excess of porphyrins in the body. There are cases when patients were treated with bloodletting porphyria themselves, that with the blood and excrete the excess porphyrins.

Scientists do not exclude that the sick man startedfeel the need for someone else's blood. After all, time is able to reduce the suffering of contact with external hemoglobin. But where and how it was to take in the Middle Ages? One method, it is described in a variety of horror stories. Man possessed a pathological desire to drink blood. Instinct makes him into a vampire. Hence myths overgrown later implausible details and any devilry.
- Porphyria and today remains mysteriousdisease - Sergei Vasiliev said. - Doctors are pinning their hopes on Genetic methods. And while trying to treat a blood transfusion. But in severe cases, which, fortunately, a little - about a hundred around the world - and it does not help.

According to rumors, it has led to incurable porphyriasuicide Henneloru Kohl - the wife of the former German Chancellor Helmut Kohl. She was exhausted from the pain that caused the light of day, almost did not go anywhere. And the July 5, 2001 committed suicide.

Contact porphyria and vampirism was confirmed by a Canadian professor biochemist David Dolphin. Moreover, he saw the probable path to a cure for skin cancer.


If singlet oxygen affects tissue whynot to use it for suppressing cancer cells? The experiments have been able to destroy some types of tumors. Porphyrins are injected under the skin, and irradiated with sunlight. Then scientists found pigments which respond to thermal radiation. Infrared rays penetrate deeper into the body - it is hoped that they can be used to treat tumors, not only on the skin, but also in other tissues. Of course, the patient will not be with a vampire, after all the work of his body will not be broken. And by done its job will be to get rid of pigments.