Down's Syndrome. Today, seven hundred each child is born with this genetic disease. What role plays later motherhood? Should we interfere with nature? How to Down syndrome before birth? 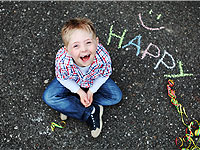 "Solar", as referred to children with Down syndromefor their open heart, with no place for anger, jealousy and fear. According to statistics from the fund "Downside Up", in Russia there is every year to light 2.5 thousand children with a genetic pathology, and the number of infants with Down syndrome, unfortunately, it is increasing every year. What is the reason, the role played by the now popular late pregnancy and childbirth? Why medicine is not able to reverse the situation?

Are parents to blame?

Even before the scientists have unraveled the nature"Sunshine," children with Down syndrome, it has been observed that the age of the mother is usually correlated with the birth of a sick child. Symptoms "Mongolism" as before called Down syndrome, a special appearance and developmental delays, more likely to have children of elderly mothers. Current data confirm these observations, it is unlikely a sick baby's birth in women aged 20-24 years is 1 in 1562 to a mother aged 35-39 years -1 to 214, among 45-year-old women every 19th birth mark on the appearance light "baby from the sun."

In the United States, according to the poll, one in fourWoman creates a family and give birth after 35 years. In Russia, for the period from 1990 to 2000, the birth rate among 35-40 year old women has doubled in comparison with the 25-30-year-olds, this trend is partly the result of anti-aging programs.

Biological age has not been canceled!

Today, looking older than his years, or according toage was somehow indecent. We strive to preserve youth and health, as long as possible, we are able to fall in love, to love, to be loved and active sex life. The birth of children, which is a hundred years ago was regarded as senile, now it has become almost the norm. But we refuse to believe that anti-aging has played a cruel joke with us and try to ignore the fact that women today more often give birth to children with Down syndrome.

A woman's age affects the quality of itsgenetic material, when a plurality of genes accumulate mutations in the germ cells. To reduce the risk of accumulation of genetic abnormalities in the human population, nature has programmed reduction in fertility of women as they age, until the complete cessation of fertility and menopause.

In his desire to have children women overcomeany obstacles. In the course are IVF, ICSI, hormonal drugs that increase the risk of malformations in the embryo. Realizing the seriousness of the problem, doctors suggest women age donor egg. In the West, up to 50% of late pregnancies have such an origin, most couples find that child health is much more important than its genetic relationship with his mother.

Although the nature of the genetic syndromeDown syndrome was discovered in 1950, it still remains a mystery to scientists. It is well known that the nature of the "sunshine" of children - in the chromosome set of the cells, for unknown reasons during oocyte maturation can not chromosomes disperse and at the confluence of the female gametes with the sperm is formed zygote trisomy on the 21st pair.

Presumably, this error is associated with"Age-related" changes in the power structures of the egg. In the UK, launched a new method for clinical trials, which will rejuvenate ova by transplanting the nucleus in the cytoplasm of a donor, but so far no one able to prevent the development of Down syndrome. 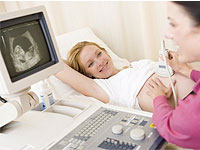 Screening for genetic pathology, held inthe second trimester of pregnancy, aims to identify Down's syndrome. The main diagnostic studies are ultrasound and biochemical analysis of blood, however, signs of Down's syndrome is only indirect, so to clarify the diagnosis a woman is sent to amniocentesis, chorionic villus sampling or cordocentesis. The reliability of these research methods 99.8%, but they are not safe for the woman and fetus and are conducted under strict indications.

High probability of Down syndrome isthe reason for termination of pregnancy. In the US in 2000, 92% of women to do so, but now the situation has changed, and often the decision to give birth.

General statistics deteriorates, but whether in this guiltylate delivery? It turns out, no, 80% of the patients were children born to mothers who are in child-bearing age with minimal risk of disease. Perhaps the reason is that women under 35 years do not go in-depth genetic testing so doctors can not prevent all cases of birth of children with genetic disorders.

"Sun Children" - the right to life

Trisomy - severe genetic pathology, usuallyresulting in fetal death and spontaneous abortion in the early stages, but not in the case of trisomy 21 in the first pair of chromosomes. "Sun Children" - this is the only case where the nature gives the right to life. The reason is that 21-chromosome - the smallest of all chromosomes, and therefore contain a minimum amount of genetic material, although these extra genes 300-400 is enough to change the lives of the syndrome carrier.

Recognizing that prevention of Down's syndrome is notThere is, doctors are making maximum efforts to ensure that the "children of the sun" grew and developed. Malformations of the cardiovascular system, often accompanying syndrome, operated on as soon as possible, so that the kid is not wandering from hospital to hospital, and had the opportunity to engage with teachers and parents. Permanent employment, love, care and proper upbringing of doing their job.

If earlier the appearance of a child with the syndromeDown was considered an irreparable tragedy, and 85% of the babies were left in the house of the baby, where they without due care and attention have died before reaching one year of age, today most "solar" kids grow and warm her parents emotional warmth. I think that we still have much to learn about these amazing kids.