What is Rakhit? Will breast milk help rashita? How to take vitamin d? Answers to the questions you will find in the article.


At the beginning of the twentieth century it became clear that the emergence of the disease is associated with the deficit of vitamin D. Its function is to help the body to absorb phosphorus and especially calcium so that the bones of the child are formed hard, especially on the ribs, wrists and ankles. Vitamin D is an intermediary between the bone system and calcium, in which the body's need is enormous.

Vitamin D was opened in 1922. Soon, doctors spoke that far from all the forms of Rahita depend on his deficit. Thus, Rakhit was divided into traditional rickets and rickets-like diseases. The latter (with the symptoms of traditional rickets) are inherited and related to genetic disorders. An ordinary Rahit is striking 30-40 percent of the first year of life. Symptoms of Disease - Lysinka on the back of the head, sweating, poorly overfasting a large spring, outlined thickening on the wrists - Rachitic wrists, on richtic rosary. 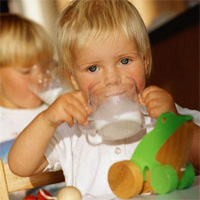 Not so long ago, doctors found that Vitamin D - actually not even vitamin, as scientists always believed, and a hormone-like biological substance and only by virtue of the established tradition continues to be called vitamin. The fact is that any ordinary vitamin, for example, enters the body and is immediately included in the metabolic processes. To launch physiological effects d, a whole specific stage of its activation is needed. Or another difference. Let's say, the body suffers from the lack of vitamin C, and the specific sickness of the qing begins. But Rahit in connection with the deficiency of vitamin D arises in one case of three.

There are other ambiguities. It is believed that under the influence of sunlight vitamin D3 - it is cholecalciferol - produced under the skin of the child automatically. And this is true. But in Africa, India, the countries of Southeast Asia are plenty of sunny days - not that in the middle lane of Russia, but also patients with rickets of children too. And this is another confirmation that it is not only in the shortage of vitamin D or the absence of the Sun. Need prevention of the disease is necessary. And first of all antenatal.

That first of all it is necessary for future mothers? They should be not only cheerful and healthy, but also to walk in every weather for at least three hours every day, better away from the tanned streets.

Pregnant should eat right. Every day, they need no less half-liter milk or kefir, 150 g of cottage cheese, 30 g of cheese, 100 g of fish. The fat-soluble vitamin D is contained in sea fish, for example, cod, butter, egg yolk, cod liver and, according to the latest data, in champignions.

It is known that in breast milk vitamin d not so much. Studies of Finnish scientists have shown that children who are on natural feeding could be on the border of the deep deficit of vitamin D, and they did not observe Rakhita. The fact is that, falling with the milk in the body of the baby, vitamin acts very effectively, even if it is not much.

Mama should pay attention to the correct and timely introduction of feeding with sufficient content of vitamins, minerals, proteins. Fruit, Berry Juices, Fruit Puree - From four months. Vegetable mashed potatoes - from five, let potatoes in it be smaller, and more more vegetables. Recent studies have shown that citrate compounds contained in lemons, grapefruits, oranges, tangerines, lemones are very effective for protection against rickets.

Porridge child can be given from six months, but not manna. In the semolina, the excess of phytic acid is contained, which binds calcium in the intestines, and he does not fall into bone tissue.

With six months you can give a child cottage cheese, egg yolk. In one gram, it contains up to 390 meters of vitamin D. With seven months, a meat puree is definitely, a little later - meatballs, steam cutlets, twice a week try to replace the meat.


How to take vitamin d

Considering the modern disadvantageous environmental situation, especially in metropolitans, many pediatricians believe that from two-three-weekly age every baby as prevention should receive 400 me vitamin d per day. If signs of rickets are not observed, the dose remains constant throughout the first year of life.

If you manifest, the necessary dose d and the treatment regimen will select the attending physician. Preparations of vitamin D - calciferol - produced in three versions - oil, aqueous, alcohol solution. A domestic baby as prevention will suit any form of vitamin.

With symptoms of rickets - aquatic or alcohol drops.

But when signs of the disease will disappear, the time of massage and salt-coniferous baths will come to strengthen the bone apparatus, enhance the muscle tone. Wellness bath prepare so. Ten liters of water requires a tablespoon of coniferous extract and cook salt. The duration of the bath is about five–seven minutes at a temperature of 37 degrees.