Tuberculosis is widespread in Russia. The most frequent pulmonary form of the disease occurs in people with weakened immune systems - their body can not fight infection. You can also become infected by contact with a sick person. Particularly acute tuberculosis in spring and autumn, during these periods the infection is most likely. 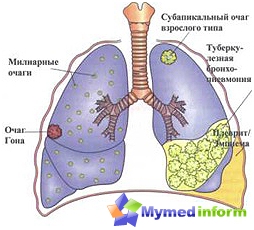 Symptoms of tuberculosis are constantly
fever (not above 38 ° C), headache, weight loss,
anorexia, coughing (both dry and sputum, blood in
sputum), shortness of breath, sweating at night. There are mood swings,
irritability, decreased performance.

Wink can only
1-2 symptom, not necessarily it will be a cough. Therefore, when
the appearance of one of these symptoms is not recommended
treat yourself, and see a doctor in time to
diagnose possible tuberculosis and its timely start
treatment.

The simplest test for tuberculosis - the reaction
Mantu. 72 hours after the Mantoux test can determine if a
body TB infection. However, this method has a very
low accuracy.

Smears under the microscope, too, can not be a model:
Mycobacterium tuberculosis is easily confused with other species of bacteria and
make the wrong diagnosis.

Sputum culture often helps to diagnose TB, however,
TB bacteria "grow" is not always so, and there are a
the risk of false negative test.

Most often, for lack of anything better, for screening for tuberculosis using a conventional chest X-ray and examination of the patient.

In a specialized clinic, you can make a determination of antibody titer to
tuberculosis. This method allows to detect the presence of immunity to
tuberculosis and determine whether effective vaccination.
Reliability - about 75%.

The most modern method - PCR (polymerase chain reaction). it
DNA diagnosis, when the analysis is taken on the patient's sputum. Result
can be found after 3 days, the accuracy - 95-100%.

Treatment of normal (the drug-sensitive) TB takes
less than 6 months, and sometimes delayed up to 2 years. For the oppression of infection
therapy should be carried out systematically, without a pause, while tuberculosis is not
be able to progress.

When tuberculosis is identified, the patient is placed in a hospital, where he
He spends about two months - during which time stops active
allocation of tuberculosis bacteria. When the patient ceases to represent
a threat to the health of others, leche

Treatment of conventional TB is carried out in a specific pattern, it
includes drugs such as isoniazid, rifampicin, pyrazinamide,
streptomycin and ethambutol. The doctor selects a specific combination
drugs, which the patient must be taken for 2-3
months, the treatment takes place in a hospital.

If after this
time treatment has not brought the desired effect or the effect is very weak,
due to infection resistant to a particular drug, the
chemotherapy amended accordingly. In such cases
is replaced by one or more drugs or else change their way of
administration (intravenous, inhalation).

If, conversely, after 2-3
months of taking the drugs there is a positive effect, for
the next 4 months prescribed only isoniazid and rifampicin. By
after treatment the patient again passes tests and, if the stick
Koch will be revealed, then moved to the TB
drug-resistant forms.

Treatment of drug-resistant form of tuberculosis has been delayed for years.
Depending on to which drug resistant bacterium
tuberculosis, the main drugs (isoniazid, rifampicin) is added
the so-called second-line drugs - ofloxacin, kapriomitsin,
ethionamide, cycloserine, PAS.

Second-line drugs are much more expensive than
ordinary TB medicines, and treatment can cost them about 10
$ 000. Taking these drugs can only be in the complex, otherwise there will be
effect.

Surgery for the treatment of tuberculosis is rarely used, because the effectiveness of this method is very low.

Previously, an integral part of treatment for tuberculosis was the spa treatment. Nowadays, treatment in sanatoriums
It is only an additional means of controlling the disease.

But if
patient refuses hospitalization, when it is really
necessary medical institution has the right to submit a court
patient for compulsory treatment in a TB clinic. This
practice applied universally in the treatment of patients with irresponsible 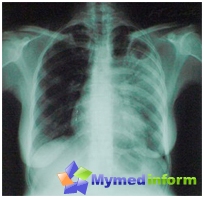 and
ensuring the nation's health.

Of great importance is the right food to cure the disease. The diet
the patient should include meat, fish, vegetables and fruits. Alcohol
and smoking is strictly contraindicated.

Since the patient often loses
appetite for tuberculosis is recommended to eat foods
rich in vitamins, which tend to excite the appetite: infusion
rosehip, fish oil, yogurt, kefir.

If
a person has a strong immunity after infection it is not
sick immediately, but remains practically healthy, although infection
remains in the body. It can last a lifetime and
never lead to tuberculosis.

The impetus for the development of tuberculosis can serve a lot of stress,
malnutrition, prolonged binges. Most people do not even
suspect that the bear in his body tubercle bacillus. So try to always maintain your health is normal, that is in itself
Statement will oppose the development of the disease.

can you
reassure the common cold causes a decrease in immunity, but this
enough to start tuberculosis. To start tubercle bacillus
multiply, weakening of immunity should be extended and combined
with poor living conditions - poor quality food, lack of fresh
air, hard work in the contaminated areas.

Tuberculosis - a disease of poverty and
unsanitary conditions. To protect yourself from this disease, you need to take care of
his immunity - a strong immune system in a state of their own
Koch wand to defeat, if that is ingested. To immunity could
cope with the disease, you need to eat quality and varied,
take vitamins, a lot of walking and do some sports.

The leading role in the spread of drug-resistant tuberculosis
play prison. Treatment of prisoners are often held wrong or
patients themselves properly and taking medication as a result of tuberculosis
Multidrug resistance is distributed in
exponentially.

Once in the air, the tubercle bacillus viability for 10
days - for example, in street dust. But in the absence of sunlight
Bacteria live much longer - several months.

You can become infected just by inhalation of air in which there are
microscopically small droplets of saliva and sputum of the patient. There will be
infected or not - it depends on how much of the bacteria got into
lungs, the organism can suppress or not.

If a long time
be in the same room with a patient infected with the danger increases
at times - which is why so "blooms" of tuberculosis in prisons. The worse
ventilated room, the longer the bacteria remain in the air.

You can not become infected by shaking hands with a patient on the street. but
room where the air is almost motionless and tactile contact
the use of common household items significantly increase the risk
infection.

A person can get TB by eating milk from cows,
TB patients. We recommend: do not buy milk "in
housewives "who trade in places not intended for trading - their
goods pass sanitary-epidemiological control and no
ensures you the safety of their products.

If among your friends is someone who
suffering from tuberculosis, be tolerant to it. The man certainly suffers
by the fact that all surrounding shy away, as soon as he kashlyanet.

Of course, all of us terribly ill with tuberculosis, but we must remember that
normal conscious people will never appear in
society, knowing that is dangerous to others. Therefore, patients who
work or study with other people, most likely, can not nobody
infect.

Very often, people even after successful treatment of the disease
for many years suffered from unduly squeamish attitude of others.

Of course, the natural repugnance and fear of infection will not
hide, but if you fell to communicate with a man who was sick
tuberculosis, suggested still try to find the
strength not to show his attitude to his former disease has not
offend him by their attitude.