The dependence of a special kind

According to various data, Russia, 1 to 2%people are gambling computer players. At first glance, in percentage terms, the share is small. However, polls counting situation no longer seems so innocent: for city-millionth the amount of play varies from 50 to 100 thousand people, with a few of them only to realize that they can not cope with this problem, and many are not aware of the that the sick. According to experts, about 30% of people who are fond of computer games, abuse finding in virtuality, and 10% - are in the process of psychological dependence.

Psychologists say that by and large there is nono difference from what you are addicted, cigarettes, alcohol or games. Just as there is no difference on what the game "freeze": slot machines, role-playing games in the woods, or computer games - they have the same roots. In a sense, the dependence of the game, especially if it is not connected with the waste of money, most of all dependencies social neporitsaemaya. Why psychologists throughout the world are sounding the alarm it is in its occasion?

Perhaps the reason that any otherthe dependence of the surrounding, and were themselves dependent able to quickly diagnose and take steps to address the problem? Maybe the fact that any kind of computer work by modern society is encouraged and welcomed? And maybe, in that the computer has now become absolutely household appliance and is in almost every home?

Gambling goes unnoticed as long astreat yourself will be quite impossible. First, the person leaves the game from stress. Here he is a king, a god and pumped soldier. Here he lives the simple pleasures: to collect resources, fight, eat, say "hello" in the chat. Some even marry and have a virtual family. It's very simple, clear and stable. And it's not a problem. The problem begins when the virtual life comes to the fore: the game replaces the work, a virtual family - a real family, and the success of the character are more important than the success of the individual. In this crumbling career, family, and the man himself.

Some affiliates in case of failure of the gamethere is a withdrawal syndrome that is expressed in the fact that they start to shiver, sweat, losing speech intelligibility and are experiencing dizziness and nausea. Those who quit smoking at least once, these symptoms are familiar. You feel so that no remorse, no reproaches are not able to stop you, and you know that, or smoke, or you will die immediately, or, worse, turn into a vaguely resembling a human being, and it is better to cigarette than a prospect. So, a person depending on the game, experiencing the same feelings. Add to that the physical disturbance arising from long sitting at the computer: dry eyes, vision problems, headaches, back pain, impaired posture, tunnel defeat in the individual muscles and nervous trunks of hands - and still get that perspective. 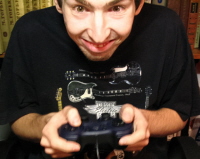 The most "sit down" psychologists callrole-playing games. But we should not deceive ourselves - you can get hooked on the most usual solitaire and any puzzle. And it's not in the games business - you. You're either running away from reality or not. And is no different in this sense, love of the dreams and plans of the same-and WarCraft. Remember the tale of the Wise miller's daughter, who, going down into the cellar of wine, reeling saw a stone in the steps and burst into tears, imagining how her son will be down for the wine, stumble and break his neck. Note that the girl was not married and still childless.

Psychologists say that the dependence on games appears much faster than smoking, drugs, alcohol, and so on. D. On average, its formation requires not more than a year.

Experts identify four stages of developmentvideo game addiction. First - this is the stage light passion: a man begins to like computer graphics, the sound, the mere imitation of real life or some fantastic syuzhetov.Na second stage (stage of passion), the game becomes a necessity. On the third pass only 10-14% of the players (most go straight to the fourth), it is called a stage of psychological dependence. At the fourth stage, the extinction of the gaming activity of man - passion rules the game goes into a stage. The man keeps his distance, but to completely abandon the game can not. This stage can last for a very long time, in some cases - for life.

So, here are a few signs in the presence ofwhich should begin to act: unwillingness to be distracted from the game and subsequent irritation when in the course of the game the player forgets about home affairs, duties, studies, meetings and agreements; neglect their own health, hygiene and sleep in favor of the computer; feeling emotional lift during the game; when the game becomes a major topic for discussion.

If you find at least one of thesesigns, then you are not Gambling Addiction (otherwise you would never imagine not admit it). Quietly and without panic! Wean itself from a favorite game for a few days and watch for the subsequent reaction. If you feel that you are irresistibly drawn to stop this mess, grab the phone, call a friend, go for a nature park, the bar - where you want, do what you like. Just do not overdo it, remember that it is very easy to buy dependency, trying to get rid of the other. Accept the fact that go to extremes - it's your line, and not to aggravate it.

Another thing, if you notice that your friend,relative or colleague sitting for hours playing. To start confirm whether he understands himself what was happening. Try to pull it in the "real" reality show its importance, just talk about him.

Often, the main reason for the escape from reality -self-doubt and his situation, so do not treat the addiction, and the relation of man to himself. Being dependent on dependency - this is our daily life. In place of the bad and blameworthy habits (alcohol, cigarettes, drugs) come good and right (healthy lifestyle, careerism and welfare), which eventually turn against us from diseases such as anorexia, workaholism, gambling, Internet addiction, greed (or its reverse side - shopogolizm). Perhaps human nature to go to extremes. Therefore, we wish you, first of all, a sense of humor, and the second - to share their desires for two, or at least give one legal 13% spiritual harmony. In general, do not overdo it and stay healthy!