Some of the young people is solved, at leasttry the so-called "opening the gates" substances, nicotine and alcohol. Many in the beginning are going to observe moderation. Some cares less; they just want to experiment and see what happens.

Recent inevitably will descend to "lift"located to the lower levels of drug abuse. The first are "slipping" and finish in the same "way down", even if they promised myself that this does not happen (but then, before they started, they did not know the whole truth about drugs).

A man gets drunk on a regular basis and / or started smoking marijuana.

Regularly get drunk - then try to findin the intoxication of pleasure or comfort in the "full sedated." By doing this, a person enters into possession of drug addiction. This is not just to participate in the "parties". It is to come and "get drunk to pieces." These are different things, and they must be called by their names. Experimenting with marijuana - a drug. This is not the lowest "floor", but it is full agreement on the use of addictive drugs acting on the psyche. Many people smoke "weed", and many of them will continue to smoke it in ten, and twenty years later, though in the beginning they swore that they would not do that.

Truth, by which a young person should notturn away, it lies in the fact that when he or she decides to consent to experimentation with marijuana, he or she sends a "lift" on the floor, located below the "foundation of the house."
This is not the same as a drink. The chemicals in alcohol and marijuana are very different from each other. Therefore associated with marijuana is quite long-term psychological effects.

In addition, the fact that in the modern worldeach child will be faced with numerous and often repeated invitations to smoke marijuana. The only way to ensure that he or she had not smoked marijuana - is at the very beginning to make a decision to refrain from the use of mind-altering drugs. But it all depends on what time, how much. It should be abstinence rather than moderation. It should be one smoke marijuana, and the residual effects of hallucinogenic drugs linger in the tissues of the body for years. The result is obvious.

If your child started to smoke "weed", you are already talking to a man who began to experiment with the effects of drugs on the psyche.

"Elevator" is becoming a "escalator". This "escalator" continues to creep downward. And even if a person is making a deliberate attempt to get away with it, it is not so easy to do. It ends all that people unsuccessfully ran back up the stairs moving down. He has to run away and bump into the other, joyfully went down.

Seeking the effect is now aserious mental and biochemical changes. Using inhalers, a person experiences dizziness, becomes silly, slowness and often loses consciousness. The consumer, sniffing glue or gasoline, and this strongly poisoning your body thinks that you can endure even the headaches, just to get the desired narcotic effect. Loss of consciousness is seen as just another form of "travel". The man joyfully says, "Let's oglupeem", referring to the loss of consciousness.

Today's children often argue that hold"Under the control" of psychoactive drugs that they use. Addiction, they say - it is a problem of uninformed older generation of hippies. Today, they say, is becoming smarter and more informed due to errors elders, they all night taking LSD on their rave discos only in small doses, is not enough to "get a real buzz" and not in order to earn addiction, and just to make the evening more impressive. Currently popular stimulant such as a screw. But in any form of this drug it is very harmful to the body, is very harmful to the brain chemistry and definitely addictive (ie. E. Taking it to move the mental perception, you consent to the consumption of destructive drugs for the body). These young people have forgotten about simple arithmetic. It's not how many drugs you take at one time. The important thing is how you take the drug in total. And there are drugs that act on the person is already at a dose of one-millionth of a gram (such as LSD).

From this moment the young people will haveto lead a life based on lies. Police imminent arrest of party members at which these drugs were discovered. Parents will forbid their children to go to such gatherings, and so from now on will have to learn the art of deception.

LSD and his "comrades," always act asforeign invaders. This has never been and can not be nothing natural. As recognized by one person having relationship. Drug use - is an attempt to find a way out of the real world. Advocating "mental capacity expansion" and "expansion of consciousness" from the very beginning was a lie.

You can for 30 minutes under LSDI feel like your mind flew with a missile in space, but after that you will feel that some part of you stayed forever in orbit.

If you have any suspicions or evidencethat your son or daughter began to use potent, affecting the psyche drugs, discussion of the topic of drugs already goes beyond the "anti-drug education." Now they will think that they know about drugs more than you. "If you did not try this, a father, how do you know what I feel?" - They say or think. (Incidentally, the same thing they say and people who have an addiction to heroin, crack cocaine and methamphetamine, when they burst into curses about how hard "peeling" with these drugs). But here the young people still feeling good. They just flew into orbit and seen there a few stars. So what's the problem?

A problem, particularly in that partnarcotic effects "strike" is the fact that they are no longer able to look at the world as it should be. School, class, future career, family relationships, ethics, concepts of good and evil. . . many important things are left permanently in orbit around some dark star, which they also did not choose. LSD was and still is psychiatric drugs created to induce artificial, "experimental" madness. And yet there is not (and never will be) "anti-LSD tablets."

Now the "elevator" of course, is transformed into a "moving down the escalator." There is no longer something to discuss.

Your main task - konfrontirovatfacts of the case, that is to face the truth, and do not pretend the three fools:.. one is blind, another deaf, the third it. You need to see what you see, hear what you hear, and you have to express their opinions openly. If you are afraid of the consequences of confronting open issues (eg, irritable denial that drugs consumed), then you have to be much more pleasant quiet funeral afterwards. If you make it to have gone so far, or if it has reached such a stage, beating your alertness (or it could happen far away from you, in school or somewhere in another city), you are required to safely meet the truth. It is now, when the emergency occurred, rather than later.

If you're lucky, you'll learn about the problem of your son or daughter who will come to you, frightened to death, and asked for help.

Perhaps, they will gladly promise you anything you want, for example, will no longer continue to use drugs. And at this time they really would like to think so.

In this case, you should contact the experts. We need serious work in order to negate the damage that was caused the consumption of crack cocaine, heroin, methamphetamine and various doses of hallucinogens. And get rid of this problem is not easy. It is no longer enough to "just say no". Even if abstinence is maintained for some time, may occur a sudden and abrupt relapses.

Spiral addiction: Under the influence of drug addiction destroyed the social system and moral values.

This is the case when no movies, no TV, nomagazines or novels could not have really happened to diminish the decomposition of the individual. No need to give you examples. Everything you read in the tabloids or heard through other media, in fact, true. Do not be surprised that may still occur, just before we addict who went on a robbery, blatant lies, in order to satisfy their hunger unbearable. 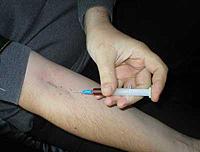 At this stage, it is not unusual if you learn about the problem of the middle of the night phone call from prison or hospital. Or you come to that all the time you wait, it will happen.

Recovery from drug addiction is not without it's aimed at the conscious effort and sincere hard work. Without this addiction is getting worse and worse.

You should seek help. We can not pretend that she or he will soon get better. Or, if you love him or her more, there will be a miracle. "Playing in drugs" has come a long way. Maybe too far. But you have to call for help. Do not wait until there will come a convenient time. Call for help. Be ready to act. If you moved the truck and you were lying in blood on the street, you would not want people to continue calmly finishes his coffee. You would have suffered pain and distress. The same applies to the addict who is now lying, cheating, stealing, or commit other crimes to support their habit. He or she directs the chemical alien force. And in order to save him or her, you will need a professional and competent help.

Now time to talk with the consumerdrugs. It's time to talk with the experts. You can not believe what a drug addict will tell. Even if he had the chains to what he says, after a few minutes or hours, he will be a different person, experiencing the anguish because of the need for any chemicals. Since then, he is now all the time is the "enemy", no longer knowing who he really is.

Below this level is no longer any "reason", but degradation and death. Or at least the prison. But, according to the statistics of the world, imprisonment does not help the addict.

Let us not deceive ourselves. Criminals, drug addicts in detention in order to protect us, not themselves.

A common tool that uses some "full of love" therapists or organization - is to get the addict, "to know what the bottom."

The bottom may be death or a disaster, but not cure. Sometimes a person hits the bottom of the addiction with great force.

In my opinion, allow anyone to reach such a state, then confess to the complete absence of its own ability to act.

If a person is already quite serious "stuck" in thea mad desire to get drug assistance is no longer meant to help him. Now it means betrayal, causing pain, or "you're going to manipulate me," or a thousand other interpretations, "no one will be able to reach me here." But a trained counselor can "reach out" to the addict, especially if he was in such a state in the past and went all the way up to complete freedom from chemicals.

A rule that can help save the life of a person, very easy to remember. Please do not wait and deystvete.
Take action based on their own feelings, no matter whether you go ahead, or possess some evidence or facts.

Proceed. Do not wait.

The fact is that behind that sign on the gateshell, which is written in Dante, says: "Abandon all hope, ye who enter here", lies another: "Welcome to hell. You can no longer wait. Could go no farther. "