Chorea - the enemy of youth

Manifestations chorea easily confused with grimacing. So if you notice your child is "building faces", take it more closely: perhaps the baby does not need to reprimand, and in the physical examination. Involuntary twitching of the child should be especially alert if he recently had the flu or a sore throat.


What does the rheumatism 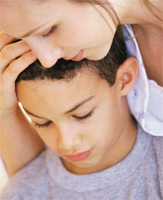 Many parents are surprised to find that, having diagnosed, the doctor will often offer to place the child in the rheumatology department of the hospital.


People often ask: what could be the link between chorea and rheumatism?

With "rheumatism" concept is usually associatedarthropathy. This defeat is really the most obvious, but not the main thing. In rheumatoid arthritis predominantly affects the heart and blood vessels, joints also involved in this process only briefly.

The nervous system is affected in all forms of rheumatism. But there is such a variety it when it is on the nervous system, the brunt falls on the brain. This is the chorea.

Translated from the Greek "chorea" means dance. "St. Vitus's dance" called the disease in the Middle Ages. Indeed, the patient can sometimes seem like a man performing some bizarre dance: it bounces, making sweeping motions, elaborate moves, bouncing gait. Of course, these jerks (hyperkinesis) and bouncing committed involuntarily, the patient can not stop them.

Sometimes the disease is also called 'Sydenham's chorea', after the English physician who first described it in 1686 and called "a small choir." Last name stuck, and now the most accepted.

Ill chorea mostly children of school and preschool age. Up to three, and after fifteen years it is extremely rare. It is noticed that the girls to the disease are more likely than boys.

There chorea, as well as other forms of rheumatism,usually after a sore throat, scarlet fever, influenza. Contribute to its development and also exacerbation of chronic infection foci: tonsillitis, sinusitis, sinusitis. Observed cases of chorea after severe trauma. Sometimes you can not find the previous reasons.

Chorea develops gradually. The child becomes distracted, touchy, whiny. His movements are losing clarity. Because of this, the handwriting is illegible, appear in notebooks blots and splashes. He eats messy, drops things: something unusual occurs in the facial expression - grimace, grimacing. The observant parents and teachers, the sooner they begin to understand that the child is not "blabbed" and fell ill.


The symptoms of chorea


Unfortunately, the medical care is usually not treated immediately, and these children are treated in hospital at the time when the disease is in full swing.

Even at the first examination in the emergency department physicianIt notes the characteristics of chorea. Tremors and involuntary finger movements interfere with the child to undress yourself. He can not perform some simple movements: for example, with his eyes closed, first pull the arms forward, then the index finger to touch the tip of the nose (the finger-nose test). Even when asked to simply shake hands, he sometimes makes it very awkward, somehow unnatural twisting his hand and making a lot of unnecessary uncoordinated movements.

The more difficult a child to write. It is difficult to have a - a spoon puts off somewhere to the side, near the mouth; it can hurt themselves with a fork, a knife.
The child speaks reluctantly, as during a conversation are amplified twitching of facial muscles, involuntary movements.

Other features of chorea - muscleweakness and decrease in muscle tone. Lying on his back, the child may, for example, freely bring your knees to your chin; Doctors call this position a symptom of "pen knife". If you try to lift it under his arm, raised only his shoulders and his head goes deep between them (a symptom of "flabby shoulders").

But for all that no deviations in the stateInternal organs were observed. The temperature remains normal or increased very slightly. A blood test also looks relatively well.

Involuntary movements, muscle weakness is not always pronounced. In recent years, the prevailing was "worn out" form of chorea, recognize that much more difficult, especially in the early stages.

Irritability, mood instability,decline in school performance - this is her first symptoms. Following such mental disorders appears restlessness. It is also not so conspicuous. No strong jerks, but parents should alarm restlessness, unsteadiness of gait, carelessness in dress.

Even less is typical of "paralytic" form of chorea, when the forefront of the picture of the disease are the phenomena of sudden muscle weakness.

How to cope with chorea


It may seem strange at first glance, acute forms of chorea often treatable faster (2-3 months) than erased. With sluggish recovery occurs within 6-8 or even 12 months.

A sick child need to ensure peace andbed rest. The range of therapeutic measures include antirheumatic drugs, which are now the arsenal is large enough. This antibiotics, and means reducing the excitability of the central nervous system and hormones. Binding vitamins, especially B1, B2, B5, which is administered intramuscularly.

It has long been observed that no matter how strong were hyperkinesis, they are completely removed in a dream, and the child is completely quiet. This alone makes me think that the usefulness of a long sleep.

all measures taken in hospitals tobaby slept longer. In the daily routine of children of all ages necessarily includes naps. The children are placed in special "sleepy chamber." The role of hypnotic drugs are successfully meeting the loudly ticking clock, the monotonous hum of the buzzer or the beat of a metronome. Windows, as a rule, remain unobscured: because the child is growing all over, light is needed.

Widely used physiotherapy, therapeuticphysical Culture. Convalescent children are engaged in manual labor. Modeling, cutting, sewing, knitting, not only entertain them, but also serve as a good means of exercise and strengthening the muscles of hands.


Horace, as well as all forms of rheumatism, characterized bycurrent waviness. Symptoms sometimes amplified, sometimes subside. Completely disappeared, they may after a long break, even after a few years, to re-emerge.

The disease is "returned" under the influenceany reasons that weaken the body. This may be the result not only of infection, fatigue, and strong emotion. Often preceded by relapse quarrel between the parents. We often think that the child does not go into the adult business, but in reality he perceives, laments and eventually become the most injured party.

However, no matter how difficult, lengthy andwavy however for chorea, yet there comes a full recovery. There are only some muscle weakness, decreased muscle tone and motor restlessness with excitement. But over time, and it passes.

Children who have had chorea, further develop normally and successfully coping with school stress.

Unfortunately, there are not only "pure" formchorea. Repeated attacks it is often combined with other manifestations of rheumatic fever, often - with heart failure. There is inflammation of the lining of the heart - endocarditis, muscle membrane - myocarditis, inflammation and may appear in the outer shell - the pericardium.

Child disturbed heart pain, shortness of breath,palpitations; Doctor detects and objective signs of cardiovascular activity. All this considerably lengthens the duration of disease, impairs the prospects for a full recovery. The main danger is that the inflammatory process usually results in the formation of heart disease.

We should try every possible way to prevent the disease, and if it arose as early as possible to begin treatment.


The attacks of rheumatic fever usually occurs after a sore throat,scarlet fever, influenza; therefore, for the prevention of rheumatic fever, any of its forms - the nervous, cardiac or joint - must be timely and proper treatment of these diseases. 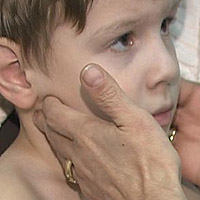 Keep an eye on the state of the child is notonly while he was sick, but when the acute phase is over. On the tenth - the fourteenth day after the onset of a sore throat or flu signs of rheumatic fever may occur!

Chorea often occurs in children sufferingchronic tonsillitis. They have angina often occur easily, without raising the temperature and only show a small pain when swallowing, and redness of the throat. Parents often in these cases, do not even go to the doctor and treat the child themselves - in most cases wrong.

Children with chronic tonsillitis inthe tonsils are constantly microbes producing toxic substances - toxins. These poisons are systematically enter the bloodstream, spread throughout the body, poisoning it, deplete the body's defenses and, of course, harmful effect on the nervous and cardiovascular systems. That is why it is necessary to urgently deal with chronic tonsillitis, treated up to full recovery. Similarly, it is important to treat the child has bad teeth, chronic diseases of the paranasal cavities, chronic purulent inflammation of the ear - otitis media.

A child who has had chorea, after discharge fromHospital desirable place in rheumatologic sanatorium. If he stays at home, then another two or three weeks, it is not recommended to go to school. In class he should be included gradually. Agree with the school doctor and the class teacher about that for the first two months after his recovery he was given an extra day off.

It is desirable to keep the nap (afterdinner). The child must walk every day for at least 2 - 3 hours. Feed him according to their age, if possible varied and nutritious, in such a way that he was getting more protein (meat, fish, cheese) and vitamins.

Rheumatic fever - a disease mostly inherentchildren, no accident it is called "the enemy of youth." 60-70 percent of all cases of rheumatism falls on the children's age and rheumatism, first identified after 40 years, is also a continuation of the process is often that began in childhood.

Modern medicine has the means,able to neutralize "the enemy of youth", to interrupt his work of destruction. We must take advantage of these opportunities and the means to perform all the advice the doctor to achieve full recovery of the child.