Fainting in a child

What are the causes of syncope in children? How to give first aid to a child who has lost consciousness? The answers to these questions can be found in the article.

Fainting at the child and its causes

Loss of consciousness, or, as it is sometimes called in the home, a swoon -
a dangerous condition associated with blood circulation in the brain
brain and requires urgent medical attention. Its features are:
relaxation of the body, inability to contact with the child, who is not
responsive to the presence of adults and their answers questions sharp
paleness, cold clammy sweat, shallow breathing, closed or slightly
half-open eyes, dilated pupils. Why the child can lose
consciousness?

There are several reasons, we list the most typical:

However, if your child has lost consciousness, your
the primary task - not determine the cause, and to provide first aid - and
As soon as possible.

The worst thing you can do - begin to get nervous, worried and in the end, too faint with terror.

Then your family will have to provide first aid immediately two of them - and well even if they are close ...

Rule number 2. Call your doctor, or call the "ambulance."

Rule number 3. Resist the instinctive desire to grab
the child in his arms and held her tightly to him - that you only make it worse
state. To do it is necessary to exactly the opposite, submitting
the following algorithm:

While waiting for the doctor lay the baby so that the flow of blood to the head was
maximum, you can even slightly raise his feet. (An exception to
this rule is bleeding from the nose or mouth, as well as injury
head.) 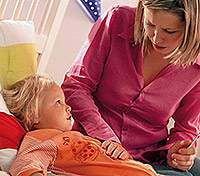 The child's head to turn to one side - or, if the child there
vomiting, vomit get into the respiratory tract. Undo the close
clothing (collars, cuffs).

Wipe the face with cold water and a child's neck. If consciousness is not
restored, soak a piece of cloth or cotton wool ammonia and
bring to a child's nose, but no closer than 5 cm (sniffing ammonia in large quantities can cause burns of the respiratory tract.).

While the doctor goes to you, think about what preceded the loss
consciousness that could cause fainting. The correct story about mom
onset of the disease helps to quickly correct diagnosis and
to help the child.

In a number of cases in older children fainting preceded by
sudden pallor, sweating, dizziness, ringing in the ears. If
time to pay attention to these signs, a dramatic turn
the event can be prevented. To do this, lay the child in urgent
position with raised legs or slightly bowed head. Reassure
baby, drink warm sweet tea. Usually this is enough.

And finally, the most important rule: if the child lost consciousness at least
for a few seconds, it needs careful supervision of a physician and
thorough medical examination. Parents should be borne in mind that
banal fainting may be the first sign of a serious disease.