The basis of the rehabilitation system - techniquebiomechanical correction of the spine developed in the 80s. Its author, the doctor - a neurologist Vladimir Kozyavkin applied the methods of manual therapy, engaging in treatment of patients with lesions of the nervous system and spinal pathology.

The first of this series of devices is carpalmanipulator which is designed to improve the hand motion. Depending on the position of the handle device can be trained or flexion - extension brush or turning left - right. During sessions of the forearm of the patient is fixed on the arm, which is height adjustable. 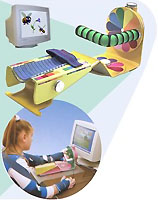 resistance knob set the required load, than the first motion exercises are carried out with little resistance, which is then gradually increased.

"Bee" The game is designed to train the brush bends to the left - right. This game follows the adventures of bees, which is a green glade collect honey from flowers.

The motions of his brush child controlsmovement of bees on the playing field. When she touches a flower or daisy, then add a drop of honey in its bucket. After earning a full jug, the bee moves to the next game level. At different levels of the game, it should avoid toadstools, avoid Bumblebee and escape from the rain.

To exercise movements of flexion - extensionBrush designed game "Cossacks." Flexing wrist, and driving his ship, the player must, bypassing rocky islands, to deal with the enemy fleet. At the next level of the game, the player skips a rider on the field and defeats his opponents.

As each child has its own motorpossibilities and limitations, before the first training session, you must configure the parameters of the game - to specify the range of the patient's movements. In the future, information on the initial parameters of the game, together with data on the performance of each game session is stored in a database and can be used to analyze the effectiveness of training.

In order to evaluate the effectiveness ofComputer gaming devices employees International Rehabilitation Clinic, a preliminary pilot study on a group of 30 children with spastic hemiplegia. These studies indicate that the use of the wrist manipulator in a complex physical rehabilitation patients helps to improve grasping hand function, an increase in the volume of active movements and the development of the forces of the brush.

For the development and coordination of body movementsimprove the sustainability position of the body in an upright position (postural control) created an exercise chair. It has a system of sensors that determine the position and motion of the body in three planes - bending forward - backward, bending to the right - to the left and turns. Information about the movements of the body is transferred to a computer and used to control a computer game. To work with the gym chair created a game with three-dimensional graphics, "Bee in the park."

During the training the child is sitting in the gymchair, the back of which is fixed to the patient's back. The child, leaning forward, backward, sideways, or turning the body, manages its object in three-dimensional virtual game world.

Wandering through the park and performing gaming tasks,the player has to compete with other characters - spider and bumblebee caterpillar. Jumping through the bushes and overcoming obstacles to find as many flowers, avoid the collision with the enemy.

The use of an exercise chair allowseffectively improve the volitional control of body movements, coordination of movements develop and train the muscle strength during the training exercise therapy.

For a more efficient conduct of the gamephysiotherapy training at the same time the two devices can be used at the same time to control the movements of a computer game both limbs. To work with a universal gaming device designed game about the adventures of a dragonfly, which travels around the tropical island. Focusing on the signs, it must find the correct way, while avoiding collisions with other players. Finding the coconut, she should fast and frequent movements of their limbs to break it, to get the prize.

An interesting feature of this game is,that it combines training the two types of motion - smooth and well-coordinated movements required for the proper movement on the playing field and fast movements with maximum amplitude and frequency of necessary game character to break found on a tropical island coconut.

One of the important components of the programbiodynamic movements correction are lessons in the simulator "Spider". The simulator is a large metal cage size 2 * 2 * 2 meters, which is located inside the patient. For the body of the patient are attached elastic rod, which other end is attached to the surrounding structure - the cage. Tie rods are attached to the body using various supporting elements in the form of special cuffs of different sizes. 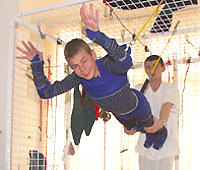 Control rods of length and their free choiceplace of attachment allows you to individually select the amount of force applied to the body of the patient and its direction, to use individual "spider's web" of his suspension. This makes it possible to significantly expand the range of exercises exercise therapy for patients with a variety of diseases.

Using blocks of the system, which are attached to the cage, and additional links can be selectively attenuated to train certain groups of muscles, increasing their level of functioning.

The use of varying degrees of anti-gravityaction relief from minor body scales, a full hanging of the patient helps to develop motor independence, while providing adequate security and motivate even the most reluctant patients to actively participate in the rehabilitation process.

Training in the simulator "Spider" are particularly effectivefor patients with cerebral palsy, nerve - muscle diseases, movement disorders as a result of carried over head - brain injury or stroke, as well as orthopedic pathology for rehabilitation after fractures and sports injuries.

Contraindications to occupations considered pronounced mental disorders that make it difficult to contact with the patient, as well as frequent and pronounced seizures.