Apiterapiya widely used in medicine sinceancient times. Honey Bee is the best natural pharmacist. The therapeutic effect of providing a number of biologically active substances, which allocates a bee.

About 6,000 years ago, the population of Egypt, along withpigeons and chickens, bred and bees. Ancient Egyptian pyramids and tombs confirm that the Egyptians ate honey not only as food but also as a therapeutic, cosmetic and preservative. It was widely developed beekeeping in India and another 4,000 years ago.

Mead attributed to a variety of nutritious andmedicinal properties. The Indians used it as an antidote for poisoning by plant, animal and mineral poisons. The Chinese were also known bee, and they were engaged in beekeeping with great love. Beekeeping was developed in Palestine, where the cliffs inhabited by many swarms of bees.

We know about the great production and consumptionhoney in Arabia. Arabs believed honey gift of God and called it the elixir. In Ancient Greece the first crystallized knowledge about the life of bees and their breeding. Beekeeping has been well developed, and within the Roman Empire. Romans were known not only for food and healing, and preservative properties of honey.

Great representative of Arab medicine AvicennaI recommend honey as a medicine and food, extending the life of the people. Beekeeping has been a favorite pastime of the ancient Slavs. In Russia it was known nutritional and therapeutic properties of honey. It was used in treating a variety of diseases, mainly of external wounds. 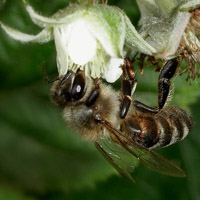 Called apitherapy treatment of humandiseases of bee stings and medicinal products that produce bees. The development of modern beekeeping allowed to scale up research work on the effect of food machinery produced by honey bees on the human body, and their introduction into medical practice.

All of these substances are used in various sectors of industry, agriculture and medicine. In addition, honey is a valuable food product.

Currently, greatly expanded knowledgeon the chemical composition of bee products (especially bee venom and royal jelly), the mechanisms of their action on the body healthy and sick person, about the possibilities of using them for therapeutic purposes in a variety of diseases.

It should be emphasized that all productsbeekeeping, especially bee venom and royal jelly, very active substances and improper dosing, or if you are sensitive to them can be very toxic to humans. Purpose of these medications requires careful preliminary examination of the patient and monitoring him throughout the treatment period. Therefore, use of bee products for therapeutic purposes can only be on prescription and under the direct supervision of a physician.