Complications after hirudotherapy session are rare, but they need to know. In this article we talk about well-known medicine oslozhneniyah.Vashe health is in your hands 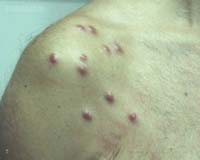 Often, after a session of hirudotherapy in placesattaching leeches patients notice localized redness, small swelling and tingling, which may not take place for 2-3 days. Do not be afraid of these symptoms. This is quite normal and usual reaction. Itching can soothe, rubbing the place "bite" with alcohol or iodine. The main thing - do not comb your skin, otherwise the wound will get the bacteria and then the matter may end it boils.

It is not recommended to put leeches on the skindirectly above the veins. If the leech will be able to bite through the wall of the vein, bleeding occurs. If this should happen, the consequences must be fought according to the rules of first aid to victims of venous bleeding: the damaged vessel is necessary to impose a pressure bandage from a clot of sterile cotton or gauze.

Do not put the leeches on places with loose subcutaneous fatty tissue, such as the eyelids, on the scrotum. As a result, it may be slowly falling swelling or extensive hematoma.

Strongly should be applied hirudotherapypeople with hemophilia. This is understandable: their blood and so badly rolled, due to the additional thrombolytic action of hirudin on the skin appear poorly healing wounds bleeding.

It is not recommended to resort to treatment with leechespeople with persistent low blood pressure, ie, having consistently low blood pressure. On average, the leech sucks for a session of about 15 ml of blood. The same number then follows from the wound. Thus, the application 10 may cause loss of leeches to 300 ml of blood, and this is for hypotensive many - and can lose consciousness.

Some people suffer hemorrhagicdiathesis. Manifestations of the disease, is caused by several reasons, partly reminiscent of the effects of haemophilia. In patients with long lesions and bleeding often occur local subcutaneous hemorrhage. Leeches they also contraindicated.

Finally, about one in ten thousandpeople are allergic to a substance biologically leeches. As already mentioned, an experienced girudolog before starting sessions of treatment with leeches, to make sure that the patient has such sharpened reaction missing. If it is found, there are two choices: either to abandon girudoterapii and fight illness by other means, or use antihistamines (eg, calcium chloride), which temporarily relieve the effects of allergic reactions.