Cervical cancer is a serious disease that can pose a threat to a woman's life.

What is cervical cancer and precancerous changes? 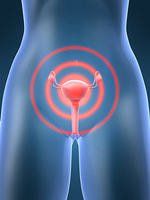 Cancer can occur in those cases when cellsany area of ​​the body grow altered in comparison with the norm. Cervical cancer - is the growth of abnormal cervical cells. The cervix - it's part of the uterus that connects the upper part of the vagina.

Cervical cancer is a serious disease,which may pose a threat to a woman's life. It occurs in women infected with certain types of HPV. If the immune system is unable to cope with this infection, normal cells can begin to grow properly and precancerous changes occur.

In the absence of early detection and treatment of suchabnormal growth of cells can be transformed into cancer. In most cases, it takes several years, although in rare cases the process may take no longer than one year.

Cervical cancer is caused by certain types of HPV

Who gets cervical cancer and precancerous changes?

Cervical cancer and precancerous changes can develop in women infected with certain types of HPV, in which the body is unable to cope with this viral infection.

About half of all women whodetected cervical cancer, were aged between 35 and 55 years old. Many of these women are likely to have been exposed to the HPV types that cause cancer, aged 10-20 years and between 20 and 30 years.

How do I know if I have cervical cancer or precancerous changes?

Precancerous changes and early stage cancer are usually not accompanied by clinical symptoms. They often are found for the first time in the later stages of the disease.

Symptoms may appear whenthe tumor grows and grows into the surrounding tissue. The most common symptom is abnormal vaginal bleeding, that occur at different times between periods or are stronger than normal menstruation. Pain during sexual intercourse can also be a symptom of cervical cancer. It should be noted, however, that these symptoms may be a manifestation of other diseases, in addition to cervical cancer to determine the cause of symptoms women should seek medical advice.

Pap test is one of the best methods to help prevent cervical cancer.

Cervical cancer and abnormal cells are detected withusing the Papanicolaou test (Pap smear). If this test indicates the presence in the cervix of abnormal cells, doctors may recommend a woman to repeat it, to be tested for HPV DNA testing, a colposcopy (cervix using a magnifying instrument) or undergo biopsy (taking a sample of tissue - biopsy - for research laboratory).

How to treat cervical cancer and precancerous changes?

The three main methods of treatment of cervical cancerare surgical removal of the tumor, radiation therapy (application of high-energy radiation to kill cancer cells) and chemotherapy (using drugs to suppress the growth of cancer cells). Sometimes treatment includes two or more of these methods.

HPV - is a widespread virus thatIt affects both women and husband-rank. There are over 100 types of this virus. Most HPV types cause no symptoms innocuous and disappear from the body itself.

About 30 types of HPV are called genital HPV,because they affect the genital area. Some of these types can cause cervical cancer or in the surface appearance (epithelial) layer of abnormal cervical cells which can be transformed into cancer. Other types of HPV can cause genital warts and benign (ie. E. Non-cancer) of the cervix changes.

HPV has also been associated with other rarediseases, such as cancer of the vulva and vagina, and RRP (recurrent respiratory papillomatosis) - a disease of the upper respiratory tract, difficulty breathing.

In the world of cervical cancer, more than 650 women die every day.

According to estimates by the World OrganizationHealth, about 630 million. People are infected with HPV in the world. The abnormal cells in the cervix and precancerous conditions that may progress to cervical cancer, there are approximately 40 Mill. Females.

Because people infected with HPV may notmark any signs and symptoms of infection, they are, without knowing it, can transmit the virus to others. Persons who have any kind of sexual activity, accompanied by genital contact, can be infected with genital HPV types, even if the sexual act did not take place.

It is estimated that the world's 40 million. Women infected with HPV.

How do you know if you have HPV?

HPV usually causes no symptoms andMost people infected with HPV do not know it. Most cases of HPV infection is detected for the first time on the basis of the test results than the rate of smear. This test is part of a gynecological exam and helps detect abnormal cells in the surface layer of the cervix prior to their eventual transformation into precancerous changes or cervical cancer.

Many precancerous cervical changes (ie. E. changes that may lead to cancer) associated with HPV and can successfully cure in case of early detection. That is why it is so important to anticipate these changes.

How to treat HPV infection?

Currently, there is no way to prove that HPV infection is cured. Most people infected with HPV, the infection is successfully coping organism itself.

However, some may be treated with the possible consequences of HPV infection, including abnormal cervical cells, cervical cancer and genital warts.

The vaccine has no indication for the prevention of recurrent respiratory papillomatosis.

What are genital warts?

Genital warts - a flesh-coloredgrowths that are most often caused by certain types of HHV. As women and men genital warts usually occur on the external genitals and the anus. Less commonly, genital warts occur in the vagina or on the cervix.

It is estimated that genital warts occur during the life of approximately 10% of men and women.

How do you know if you have genital warts?

Genital warts often do not cause any symptoms. In some cases, however, they may cause burning, itching and pain.

Doctors usually recognize genital warts by simple inspection. Sometimes they are discovered during the control examinations after receiving determination tests.

How to treat genital warts?

Sometimes genital warts disappear on their own without any treatment. However, you can never tell if they will disappear or will increase in size.

Your doctor may decide to handle genitalwarts special cream or solution. Alternatively, some genital warts can be removed by freezing, electrocoagulation or destruction laser beam. If these treatments do not bring the desired result, the warts can be removed surgically.

There is a chance that after the treatment of genital warts recur because HPV that caused them may still be stored in the body.