What drugs are used in chemotherapy of colon cancer? What are the side effects and how to prevent them? Read this article.

Chemotherapy - is the use of special anti-cancer drugs to destroy the cancer cells. 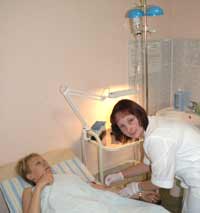 After surgery for colon or rectal cancer, doctors may prescribe supportive therapy.

Adjuvant therapy administered in the casewhen the tumor is completely removed, but its microscopic structure indicates a large degree of probability of recurrence. This probability increases even more if were affected lymph nodes.

Causes of cancer spread to other parts andorgans of the body are uncertain. Perhaps the primary tumor cells get into the bloodstream or the lymphatic system, and then they can become the "embryo" formation of new tumors (metastases or secondary cancer) in other parts of the body. The tumors in the initial stage may be so small that they during several years undetectable.

Typically, 5-FU given in combination with vitamincalled "folic acid". Sometimes drug 5-FU administered together with the drug, which is called "levamisole". It is believed that it affects the immune system.

There are several different ways toof this therapy. Your doctor will discuss with you in detail the question of choosing the most appropriate method of treatment for you. In more detail the action of chemotherapeutic agents described below.

There is some evidence that inas adjuvant therapy to prevent recurrence of the disease, may benefit from treatment and also through the use of antibodies, which is called "the method of 17-1A" or "Panoreks".

Antibodies administered to the forearm vein by using a dropper, the procedure lasts for several hours. Treatment is usually performed on an outpatient basis.

This method is not licensed, because It is currently experimental.

Many patients after the passage of the first coursetreatment for colon cancer are not faced with any more problems. But, unfortunately, in some patients there is a recurrence of the disease, or cancer spreading to other organs. This cancer is called "secondary" cancer ( "metastasis") intestine. Also, sometimes even at a time when cancer was diagnosed for the first time, there could happen the spread of cancer cells outside the intestine.

The most important fact that you need toalways keep in mind is that a secondary cancer of the bowel are often treatable. Your doctor will consider many factors before making a decision about which treatment to appoint you. This includes the following factors: what part of your body struck by a secondary cancer; any adjuvant therapy before you have received; as well as the general state of your health.

As with the auxiliaryChemotherapy, in this case it is possible to assign the drug 5FU. It is more effective if the patient uses it in combination with vitamin called "folic acid".

5FU drug can be administered either directly inby injection into a vein of the forearm or in the form of a long process of intravenous infusion. If the preparation is assigned in the form of continuous infusion, it is necessary to resort to the "center line" such as Hickman lines or Portakat. This line is a segment of flexible plastic tubing of small diameter, which is introduced into the main vein, and output to the sternum area. In this position, it is left on during the entire course of treatment designated. This facilitates the introduction of patient medication and avoids the unpleasant sensations that accompany the repeated injections. Before installing the line gives the patient a local or general anesthesia.

Such treatment can be obtained without a break for a few months, because, as a rule, it gives very weak side effects.

Studies to determine the most effective mode of administration to the patient the drug 5FU continues.

There are several wayschemotherapy. It can be carried out in the form of the course, the duration of which is typically a few days. This course takes place the patient in a hospital setting. During the treatment period followed by a period of rest, which lasts several weeks, during which the patient's body returns to normal, getting rid of the side effects of treatment. Number of courses assigned to each individual patient depends on the type of cancer is detected in the patient, and his response to the medication.

Chemotherapy can also be conducted in the form of weekly injections on an outpatient basis. 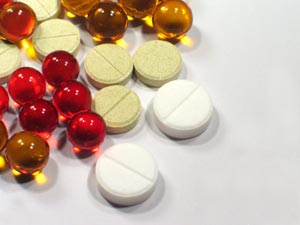 Drugs acting on cancer cells in the bodyhumans, can also lead to a temporary decrease in the maintenance of normal blood cells. When these cells become low, a person is more susceptible to infection and quickly tired. During the course of chemotherapy the patient is regularly taking blood samples and make blood transfusions when necessary or injected antibiotics to combat a particular infection.

Other possible side effectschemotherapy include nausea and diarrhea. Another side effect of chemotherapy is hair loss, but it is unusual in the case of the adoption of drugs prescribed for intestinal cancer. Some drugs also cause inflammation of the oral mucosa and the formation of small ulcers. It is important to regularly rinsing the mouth, how to do it right, you nurse will explain. If you have no appetite, you can replace regular meals nutritious drinks. In case of nausea doctor may prescribe an antiemetic, which weaken the feeling, and sometimes even removed.

Although these side effects are quite difficultportable, they disappear immediately after the treatment course. If you have lost his hair, they surprisingly quickly grow back again. Many patients are wigs, hats or scarves, until grow hair. BACUP Organization published a brochure "The problem of hair loss and its solutions", which may be useful to you.

Your doctor will warn you, what problemsyou will most likely have to face due to the passage of chemotherapeutic course, if they do arise. Tell your doctor about your side effects detected, because most of them can be weakened by means of special drugs.

Chemotherapy affects different Luden differently. Many people during the course of treatment can lead a normal life, while others find that they are very tired and have to do everything very slowly. Do as much as you can, and try not to strain.

Breast cancer: what to expect?