Hygroma - education, consisting of enoughwell-defined viscous gelatinous capsules and transparent contents inside. Often localized on the brush, and it is in this area often causes inconvenience. 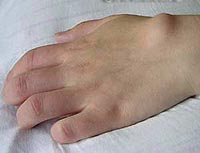 Hygroma - education, consisting of enoughwell-defined viscous gelatinous capsules and transparent contents inside. Often localized on the brush, and it is in this area often causes inconvenience.

There is no clear view on the cause of thisadversity, as well as many other diseases - not. The connection with injuries, physical activity, but in some cases hygroma appears for no apparent reason. This creates a slight bulging of the skin, as if the inside is a pea or a cherry.

Favourite localization of Education - Regionradiocarpal joint, although it happens that it appears elsewhere. Hygroma is based on the joint shells, which, because unknown to us reasons, sticking out between the surrounding joint ligaments and tendons form a characteristic subcutaneous education.

It can exist continuously without causingdiscomfort, but with time sometimes, pain. Very often anxiety appear in people who have a lot of work with your hands. Since hygroma associated with a joint, it is that the liquid flows into its cavity. Then at some time it may create the impression that education has disappeared, but usually, after some time it reappears.

Often, conservative treatments areineffective in most cases. Try punktirovat hygroma - a syringe to suck the fluid to inject a variety of substances. In this case the cavity collapses at the time, but the shell itself is not going away, and sooner or later the liquid accumulates again.

It is a terrible and painful method -crushing hygroma. In this case, the liquid is pressed into the joint cavity, or sheath hygroma is broken and the contents poured into the tissue. Over time, in the best case, still everything is back to normal. In the worst - in the area of ​​the injured hygroma may develop an inflammatory reaction until the suppuration. After crushing the shell eventually heals, restores its tightness, and hygroma reappears.

If the issue with the operation have not yet decided, and theEducation starts to hurt intensely, it is advisable to try not to burden the patient's hand. Ideally, you should perform the immobilization (creation of immobility) segment splint limbs. Local and inside can be used anti-inflammatory drugs, physical therapy has a good effect. It is better to abandon the proposal to inject hormones into hygroma zone. The effect of such a manipulation gives temporary, but complications are sometimes very unpleasant.

Hygroma - of course, not cancer, so with surgeryYou can not rush. Many people live with this formation all the life (and sometimes no one), and do not pay any attention to him. The operation should consider when hygroma creates aesthetically pleasing and causes pain during movement. Another indication for surgery - the rapid growth of education. If Gere clearly increases in size, it is not necessary to delay the operation, because a large degree will be harder to remove radically. A radical operation - the main guarantee of the absence of recurrence.

In our troubled times, the increasing commercializationhygroma and ongoing health care reform are taken to operate all and sundry. Meanwhile, the operation is very delicate and tedious, and in some locales hygromas still the option of facing serious complications.

For example, hygroma, is located on thepalmar surface in the projection of the wrist joint (go hand in hand) often envelops a radial artery. The slightest inaccuracy during the allocation of education threatens artery injury. If the hygroma not isolate completely from the surrounding tissue to the place telling her legs with joint, the risk of relapse increases many times.

What often happens when the operation is taken overunqualified? The first 2 to 3 months after the operation creates the appearance of favorable treatment outcome, but at least the remainder of the scarring is reduced tightness hygroma, and in it the liquid begins to accumulate again. In fact, instead of a good operation is only created a beautiful appearance of interference. 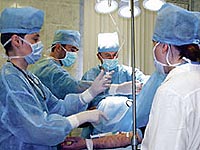 Of course, control of the operation is not Hyou can, but to determine the seriousness of his approach to the problem in a particular health care facility capable of. You need to know that the risk reduction of disease recurrence after surgery possible depends on some nuances.

Hygroma often confused with chronic bursitis. This is fundamentally not true. Called bursitis inflammation of the joint capsule (sac). Here too there is a steady accumulation of fluid, but to the anatomical structure, which is always, and without the disease exists in humans. Most often it is the area of ​​the patella and elbow. Hygroma same - normally absent, and appears as a pathological degree.