Home>Oncology>Neutropenia - a dangerous complication of chemotherapy

Neutropenia - a dangerous complication of chemotherapy

Treatment of chemotherapy - is in itselfan ordeal for a man, but it turns out that this treatment has its complications. One - neutropenia. What is this disease and how it is dangerous during chemotherapy - read the article.

Reducing the number of neutrophils (granulocytes) is called neutropenia. Very deep reduction (<500 neutrophils in a microliter of blood) called agranulocytosis.

Neutrophils play a very important role in the fight againstinfections. By reducing the level of neutrophils is a risk of infections, including serious, requiring urgent hospitalization and destination massive antibiotic therapy.


Chemotherapy: the benefits and harms

Chemotherapy - the introduction of toxic to cellsorganism preparations - is a highly effective treatment for many cancers. Tumor cells divide rapidly and therefore the most exposed to chemotherapeutic agents. However, other tissue cells, which are characterized by intensive update, while also greatly damaged. These include mucosal tissue, hair follicles and, above all, hematopoietic tissue.

Hematopoietic tissue consists of immature cells(Hemopoietic stem cells and progenitor cells) are capable of differentiating into various types of blood cells. The most common complications of chemotherapy, associated with its negative effects on the hematopoietic tissue, are anemia (decreased number of red blood cells - red blood cells responsible for carrying oxygen), thrombocytopenia (decreased number of platelets, responsible for blood clotting) and neutropenia (low neutrophil count). The most common and dangerous complications of chemotherapy was associated with neutropenia.


Chemotherapy and neutropenia: the danger 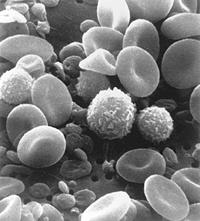 Depending on the number of neutrophils inperipheral blood, distinguished grade 4 neutropenia, the easiest of which is the first and most severe - the fourth. To avoid the development of neutropenia during the modern treatment regimens is almost impossible. As a rule, with an increase in the dose of chemotherapeutic agents increases the efficacy of treatment and the severity of neutropenia and its duration.

Neutrophils are a major factorprotect the body from infection. With insufficient amount of germs entering the body freely reproduce. Therefore, neutropenia is the major cause of infectious complications after chemotherapy. Another negative consequence of neutropenia is the need to lengthen the intervals between courses of chemotherapy in order to give the body time to recover neutrophil numbers. At this time, you need to monitor the level of neutrophils - to take blood tests 1 or 2 times (if the course is conducted on an outpatient basis, in a hospital, usually more often). The patient needs to know that he has neutropenia or agranulocytosis and take precautions during this period. Infections during neutropenia can develop very quickly and it all depends on the speed of aid.

What kind of symptoms, it is imperative to inform the doctor, for faster options:

If profound neutropenia persists to topthe next course, it is necessary to postpone the introduction of chemotherapy or reduce the dose. This dramatically worsen the results of treatment, because the tumor cells also receive time out to develop resistance to chemotherapy drugs.

In normal blood neutrophil count (from4 to 7 million cells per ml of blood) person is protected from infections caused by pathogenic bacteria and fungi. In those cases where the number of neutrophils falls below the thousands at 500 ml (IV degree of neutropenia), the risk of infection is high. However, it is very important to increase white blood cells does not become an end in itself. Dangerous levels of white blood cells are not alone, and susceptibility to infections, which in this case occurs. It is necessary to tend maximum effort to prevent infections and to continue treatment.

Such patients should be the appointment of expensiveantibiotics and antifungals, which, however, can not always prevent infection. An alternative method for the prevention of infectious complications of chemotherapy is the treatment of neutropenia itself. In order to apply these granulocyte colony stimulating factor (G-CSF) - a protein that stimulates the formation of neutrophils from progenitor cells.