The way you eat is directly related to your chances to get a pancreatic cancer, "scientists consider. What food products provoke the development of pancreatic cancer, and what food, on the contrary, helps to reduce the risk of the occurrence of this disease? Answers to these questions you will find in this article.


Persistent on chocolate, candies, candied fruits and carbonated drinks People risk getting pancreatic cancer, which is considered the longest cancer type. To this conclusion, Swedish Dr. Susanna Larsson came to his colleagues.

Scientists watched 77,797 men and women aged 45-83 years for almost 7 years. Project participants, every day that used 5 servings of sugar (for example, preferred sweetened tea or coffee) for 69% more often disadvantaged cancer than non-savings. For those who drank more than two sweet soft drinks per day, the danger of the formation of cancer tumors increased by 93%.

According to the authors of work, so far, doctors have not connected the occurrence of pancreatic cancer with increased consumption of sweet food.
Perhaps precisely because most people are eating sweetness still limited in small quantities. However, it is now obvious that sweets increase the risk of cancer tumors of this particular type.

Pancreatic cancer is one of the most serious forms of cancer tumors, actually incurable. Most patients with this diagnosis die 5 years after the detection of cancer cells. The disease, according to doctors, is caused by increased production of insulin by the pancreas. Since the increase in insulin is the natural reaction of the body for increased sugar consumption, the body of the sweet tech is just forced to work in this mode, which, most often, leads to illness.

Tell «No» pancreatic cancer - arousal on corn and vitamin C 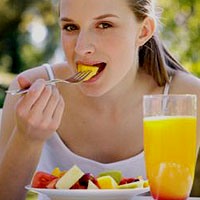 Inclusion in the daily menu of yellow and green vegetables - corn, carrots, onions, spinach, cabbage - can reduce the risk of pancreatic cancer have. Such a conclusion from the University of California in San Francisco, who examined more than two thousand people, including more than five hundred patients with this form of cancer.

«Significant risk reduction by simply change of the diet makes such a change in the most practical way to prevent terrible disease», - Says Head of Research Professor of Epidemiology and Biostatistics Elizabeth Holly. Pancreatic cancer is one of the most dangerous forms of cancer, which is diagnosed, as a rule, in the already launched state, as the pancreas is hidden by other bodies, which makes it difficult to diagnose. Life expectancy after the diagnosis is usually limited to several months, and less than 5% of patients remain alive in five years.

Injection of large doses of ascorbic acid - vitamin C - slow down the growth rate of cancer tumors by 50%, the article described in the article published by the Group of American scientists in one of the popular publications. Conducting experiments on mice, the authors of the article showed that the injections of vitamin C reduce the growth rate and the weight of brain tumors, pancreas and ovaries. This is due to the fact that due to ascorbic acid in the liquid around the tumor, a large amount of hydrogen peroxide is formed capable of killing cancer cells. Healthy cells are not damaged.


When taking ascorbic acid in the form of tablets or with food, physiological mechanisms in the body do not give its concentration to exceed a certain level. «If you eat with food more than 200 milligrams of vitamin C per day, for example, two orange and broccoli portion, your body does not give rise to the concentration of ascorbic acid in the blood above a certain level», - says the lead author of the research Mark Levin from the National Institute of Health.

To overcome these controlling mechanisms, scientists injected ascorbic acid into veins or in the abdominal cavity of rodents with brain tumors, ovaries or pancreas. Due to this, they got the opportunity to introduce high doses of vitamin - more than 4 grams per kilogram of body weight daily. Vitamin C plays an important role in the body, its lack leads to Qing and, ultimately, to death. This substance performs the function of antioxidant, protecting the cell from the harmful effects of free radicals.

The authors of the study suggested that in high doses vitamin C will play the opposite role, generating free radicals and contributing to the formation of hydrogen peroxide, which, on the assumption of experts, can kill cancer cells. In experiments with 43 varieties of cancer and five types of healthy cells, scientists have found that ascorbic acid in 75% of cases acts on cancer cells. In experiments on mice, patients with cancer, vitamin C injections reduced the growth rate of tumors by 41-53%.

Interest in vitamin C as a medium of cancer arose about 30 years ago, when a series of studies showed possible benefits from its use in tumors. However, it was later discovered that the reception of vitamin in the form of tablets does not affect tumors in people's cancer patients. According to Levin, there are currently planning for future clinical trials of a new anti-cancer drug based on vitamin C.

Symptoms and diagnostics of pancreatic cancer