Esophageal cancer rarely occurs suddenly, muchmore often it is preceded by conditions such as "Barrett's esophagus" and seemingly banal heartburn. So if you often tormented heartburn be alert to esophageal cancer there are only two steps. 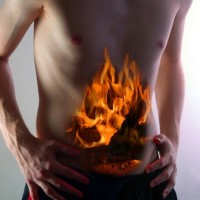 Millions of people suffer from heartburn world. This particular burning sensation behind the breastbone. Heartburn is a symptom of gastroesophageal reflux disease and is caused by prolonged contact of acidic (pH <4) of gastric and / or duodenal contents with the esophageal mucosa. This leads to inflammation of the distal (remote) of the esophagus.

Whether lightly to heartburn? Absolutely not. Prolonged contact of the active chemical gastric and duodenal contents neorogovevayuschy flat epithelium lining of the esophagus can lead to gradual replacement of its cylindrical (tsilindrokletochnaya metaplasia of the epithelium). As a result of developing a disease known to Gastroenterology and Oncology as "Barrett's esophagus". The first description of the disease was done in 1950, the English surgeon Norman Barrett.

Is it possible to cure the patient, sick"Barrett's esophagus" or esophageal cancer? The development of modern diagnostic and treatment methods make it possible to answer this question with great optimism. To do this, there are a number of preconditions. Cancer of the esophagus against the backdrop of "Barrett's esophagus" develops for a long time. Changes in esophageal mucosa epithelium through several stages in its development before there is a cancerous transformation (metaplasia-dysplasia-carcinoma). Timely treatment of the patient to the doctor gastroenterologist and / or oncologist will start the prevention and treatment of "Barrett's esophagus", long before the development of cancer. Diagnosis of esophageal cancer at an early stage of the disease and gives the patient a chance for a full recovery.

The main method of diagnosis isesophagogastroduodenoscopy. Therefore, when a long-term heartburn must perform this routine now study. However, in cases of suspected "Barrett's esophagus" requires a number of additional studies (chromoendoscopy, optical coherence tomography, magnifitsiruyuschaya endoscopy, endosonography, multiple biopsies with qualitative morphological examination, diagnosis of genetic disorders tsitofluometrii methods and immunohistochemistry, and others.). In this regard, patients with gastroesophageal reflux disease and "Barrett's esophagus" should be screened in specialized clinics.

It is understood that from the correct diagnosis, and thus the choice of rational tactics of treatment depends on the forecast in terms of the development of esophageal cancer with "Barrett's esophagus".


Prevention of cancer of the esophagus

The basis for the prevention of esophageal cancer isespecially timely detection and treatment of precancerous conditions (in this case - esophageal Berretta), as well as the detection of cancer in its early stages, making it possible to conduct a successful radical treatment. Patients with Barrett's esophagus should be monitored by a gastroenterologist, at least 1 time per year.

Therefore it is necessary to systematically undergo preventive checkups and tell your doctor about any health disorders, difficulty in swallowing, passage of roughage.

As to external factors contributing tothe development of esophageal cancer include poor diet (abuse of very hot, pickled foods, lack of vitamins A and C), as well as smoking and alcohol abuse, as a prophylactic measure is expedient to give up bad habits and normalize diet.